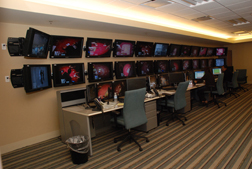 Goes with Honeywell CityCentre story; please place towards the top of the story. Caption: In the Aria’s surveillance center, operators can easily choose video feeds to view, as opposed to pulling through all video feeds at once.
Eight days before the opening of Las Vegas-based ARIA Resort & Casino in mid-December 2009, the Nevada Gaming Control Board approved the integrated surveillance system that had been installed there by Brick, N.J.-based North American Video, under the direction of Ted Whiting, director of surveillance at ARIA Resort & Casino. By contrast, many casinos are approved the day of or even just hours before opening, Whiting said.

One day before the opening of ISC West in Las Vegas, Honeywell Security Group hosted a behind-the-scenes tour for security industry writers and photographers of this impressive surveillance system â€” a multi-million dollar project that spans not only the ARIA Resort & Casino, but the new CityCenter mega-complex as well.

The CityCenter complex â€” described as an urban metropolis on the Las Vegas Strip â€” is the largest privately funded construction project in U.S. history. Developed by MGM MIRAGE and the Infinity World Development Corp., it is an 18-million square-foot facility spread over 67 acres. The Honeywell video system, installed by integrator North American Video, captures data from CityCenter’s parking and retail locations, as well as the ARIA Resort & Casino, which includes more than 4,000 hotel rooms, 10 bars and lounges, and a 150,000 square-foot gaming space with 145 table games and 1,940 server-based slot machines. 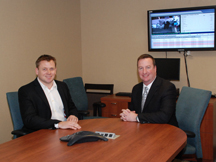 Goes with Honeywell CityCentre story; please place towards the bottom of the story. Caption: North American Video’s Jason Oakley and Honeywell Video Systems’ Scott Harkins describe the multi-million dollar integrated surveillance project at Las Vegas’ CityCenter and the Aria Resort and Casino.
“At ARIA, all of the things we wanted to do [in a surveillance operation], we did it here,” Whiting said proudly. He pointed out the head-end control room, which houses the matrix switching equipment and encoders, the surveillance monitoring center with 24 wall-mounted monitors and a sizeable set of desktop monitors, and a separate viewing room for managers to review video footage without interrupting surveillance operations.

Whiting described the project as a “blended system â€” some analog, some digital,” which blends the best of everything including access control. The project seamlessly integrates Honeywell’s newest IP video technology with analog video and the facility’s IT systems. All of the technology is managed under a single software platform, Honeywell’s MAXPRO® VMS (video-management system). The system’s distributed hardware network design allows operators to easily choose video feeds to view from the surveillance equipment room, versus pulling through all video feeds at once, Honeywell said in a press release issued yesterday, describing the project.

In all, the system encompasses about 2,700 cameras, of which 1,100 are part of the gaming surveillance operation for which Whiting is responsible. Whiting is especially pleased with Honeywell’s high-definition cameras due to their ability to provide such fine detail â€” in this case, the exact dice roll on a gaming table â€” even in the lower lighting levels maintained in ARIA’s casino.

There are 360-degree cameras integrated in this project, too, which help the surveillance team track the whereabouts of individuals who first become suspects at any of the gaming tables. Whiting ascribes to a concept of “choke points,” areas on the floor where all guests eventually must pass through. These choke points are also ideal spots for HD surveillance for recognizing and identifying certain individuals.
Whiting is co-chairperson of the MGM-Mirage Technology Steering Committee, which continually reviews technology against a set of 150 checkpoints in order to determine its viability in a gaming surveillance environment.

In choosing Honeywell to provide the video platform for this project, “I wanted to make sure it was a big company that could be around to support us, first of all. And that they could integrate anything we came up with,” Whiting said.

CityCenter also is using Honeywell’s Integrated Data Manager solution that ties data from point-of-sale systems, slot machines and cash counters back to MAXPRO VMS. Security personnel can review cash handling from anywhere within the facility and conduct both post-forensic and real-time analysis.

“This is a flagship project for North American Video,” described Jason Oakley, North American Video’s CEO. “Our experience with gaming and with Honeywell made this an ideal project.” He explained that the entire system was first built off-site at NAV’s Las Vegas office. “Three months before opening, we brought it onsite,” he said.

In addition to the CityCenter surveillance tour, Honeywell will demonstrate its full portfolio of IP video surveillance systems at ISC West 2010, beginning today, in booth 14023. For information, visit www.honeywellvideo.com.