Bill Brennan found himself in a real jam, professionally. Panasonic, his employer, was embarking on a massive overhaul of its video surveillance business in North America to become a B2B solutions organization. In other words, the company was turning its marketing focus to the end-user community — and its back on security integrators.

The structural changes, carried out in 2012, saw the merger of Panasonic’s Toughbook group with its assorted B2B divisions under one umbrella. The company brought in a small army of salespeople who were commissioned to go straight to end users and solicit. At the time, Brennan served as vice president of Panasonic’s reseller channel. The blowback was immediate.

“It was extremely disruptive. We had all these long-term relationships and now the manufacturer is walking in and really disrupting those,” Brennan explained to SDM. “I experienced the disruption firsthand. I was the one fielding all the phone calls. Our foundation was based on the relationships that our integrators created.”

The tumult led to Brennan’s departure from the globally recognized brand. But he didn't venture far. Jenne, the distributor, sought his expertise to help them grow their security base, representing the portfolio of i-PRO surveillance gear.

“It was a bit of a humbling experience for me. I'm back out cold calling,” Brennan recalled. “People would say to me, ‘Well, we didn't hear a lot from you at Panasonic, but now you're calling us.’ But I believed in the product. I always knew that if we brought forth the i-PRO product to an end user we were doing the right thing. It lasts; it's high quality.”

‘Provide resellers what the they need’

In 2017, Panasonic came knocking with a proposition for Brennan. They wanted his services again to oversee the security side of the business, which was dogged by disappointing sales outside its home base of Japan. He agreed to take on the job under one condition: “That we're 100 percent channel based and we're 100 percent reseller. We are going to respect and provide the resellers what they need.”

Panasonic made the commitment and Brennan dug in to remake the company's business model once again — and repair its reputation in the channel. Still more change arrived in 2019 when Panasonic reached an agreement with a Tokyo-based private equity firm to establish a new, independent company to acquire its security systems business. Brennan was tapped to serve as president of the business in North America. Then in 2020 he oversaw a rebranding of that business — Panasonic i-PRO Sensing Solutions Corp. of America, a subsidiary of Panasonic i-PRO Sensing Solutions Co. — which now, as of April, goes to market as i-PRO Americas.

Today, after so many years of various market struggles, competition from low-priced Chinese products, name changes and self-inflicted wounds, Brennan said the rocky evolution of the i-PRO brand is finally settling in and beginning to make real headway. In April the company added a Canadian branch in the Greater Toronto Area to extend its presence in North America.

“We have experienced growth through a simple thing of being transparent, being forthright and really gaining the confidence and trust of our reseller community,” he said.

“In terms of our go forward security strategy, it's the video surveillance side of our business with public safety,” he said. “We've really been working very strongly with third party leaders like Genetec in that space to come forth with a true citywide surveillance strategy with us providing the hardware.”

When asked what he views as the company's key differentiators in the market, Brennan cites a major emphasis on edge AI technology and meeting market expectations to go beyond traditional video surveillance. 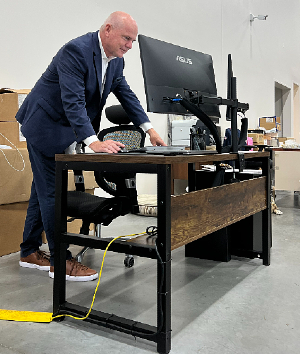 Bill Brennan was named president of i-PRO Americas when it became an independent company in 2019.“When you look at AI and analytics, the image quality is essential. That's the only way these types of analytics are going to be effective is to have very strong image quality,” he said. “Poor video is useless video. AI technology is essential. There's still going to be human intervention, but they are better prepared so we can look to prevent unfortunate events from occurring.”

And don't misconstrue i-PRO as a small-, medium-sized business brand, he said. “We are very much project based. We don't have the kind of run rate business that others may have. So we're very much focused on working with our integrators to provide them with contracts, different types of grants, helping them go out and be able to support their customers, and be able to secure projects.”

Brennan explained the ideal channel partner match for i-PRO are those integrators who understand the company's strategy, and are willing to lead with i-PRO and evangelize about the portfolio in the marketplace.

“For example, with our Video Insight [enterprise VMS] solution, we are 100 percent focused on the education market. So it's about understanding that market, embracing it and then embracing our relationship with other third party brands,” he continued. “And what they get in return is protection. They get leads, they get support. That is the type of partnership that we want to create.”

Despite the lingering supply chain crisis, Brennan said the company will introduce around 90 cameras in fiscal 2022, more than it has in any year going back at least a decade.

The biggest supply chain disruption i-PRO is contending with is mostly on the logistics side with freight delays. “We are starting to see a light at the end of the tunnel on the component side of it, albeit with paying more. We're trying to do everything we can to maintain our competitiveness and not pass that on,” he said.

The launch of the new independent company in 2019 came with a commitment to deliver new technologies more efficiently and more quickly. With its engineering, quality assurance and manufacturing organizations still intact, the statement wasn't just bluster. Boosting its multi-sensor camera offering has been a particular emphasis for i-PRO, including new additions to the S-series AI cameras in the spring.

“This speaks a lot to [former parent company Panasonic's] old global concept. I don't know why but in Japan, for example, they still utilize a lot of PTZ cameras,” he said. “Multi-sensor cameras have not taken on there, so we lagged behind. But we have caught up very quickly. We are looking to lead in the edge AI space.”

Amid rising inflation and an uncertain global economy, Brennan remains bullish on the integration business despite the threatening headwinds. However, he often has conversations with integrators about the need to develop a recurring monthly revenue model to help strengthen their organizations. Brennen references remote guarding as one example of real RMR growth opportunity, along with offering professional services that lead to a more consultative sale.

“When I speak to integrators,” he said, “the main thing I ask them is at the beginning of the month what are you going to bill? It has to go beyond project.”

Maintaining open lines of communication with integrators is paramount to Brennan's work these days, as he works to prove i-PRO’s mettle and conviction to the channel. While it’s been an uphill battle, he declares, “We’re back.”