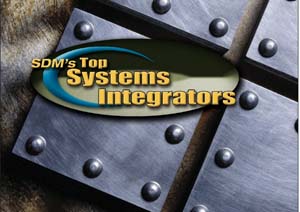 Touched by an improved economy in most regions and some expenditure of Homeland Security funds, seven in 10 firms reported in the 10th annual SDM Top Systems Integrators Report increased revenue in 2004 â€“ and many anticipate 15 percent or more growth in 2005.

The report ranks by revenue the largest firms that contract electronic security projects for commercial, industrial, institutional, government, and other non-residential markets. These systems integration firms are businesses that derive more than half of their revenue from the sale, design/engineering, installation and service of multi-technology electronic security systems, such as access control and video surveillance.

This year, reporting considerations hampered some of the larger ranked firms from breaking out their systems integration revenues separately from total company revenues. Therefore, SDM estimated revenue at the same level as 2003 for both Johnson Controls Inc. and ADT Security Services Inc.

Nevertheless, some indications of positive revenue improvement can be gleaned from the remaining Top Systems Integrators: Among companies reporting an increase in 2004 revenue over 2003, the average increase was 28 percent.

A total of 19 firms reported decreased 2004 revenue compared with 2003, averaging about 14 percent among them.

Total 2004 revenue among SDMâ€™s Top Systems Integrators increased 12 percent. But many also report that they expect 2005 revenue to increase by 15 percent or more.

Many cited reasons for their optimism. Intervid, Frederick, Md., anticipated 20-percent growth in its Mid-Atlantic and Northeast regions because of closing operations in the Southeast. Hamilton Pacific L.P., Pasadena, Calif., forecast a 20-percent increase because of adding territories and â€œutilizing vertical market penetration.â€

In Plymouth, Minn., where Pro-Tec Design Inc. is located, the gradual return of new construction encouraged forecasting of increases of approximately 20 percent. â€œInvestment in security systems is becoming a more high-profile decision, driven by influence from corporate IT and risk management departments.â€

Cam-Dex Security Corp., Kansas City, Kan., was more conservative, anticipating raising 2005 revenue by 11 percent due to increasing demand and an increase in new construction over the last three years.

Others were realistic. â€œWe think revenue will go down due to the economy,â€ conceded Bonneville Construction S.E., San Juan, Puerto Rico.

Acquisitions fueled some of the growth in 2004. The revenues of several Top 100 systems integrators from last yearâ€™s report have been absorbed in the figures of other companies.

Last year, total revenues for Top Systems Integrators increased, while the number of employees decreased. This year, the reported increase in revenue is more modest, but the number of employees has increased. This may be the result of the inevitably inverse relationship between projects and employment levels: by the time employment catches up with increasing workloads, those workloads slow, either due to economic conditions or in response to decreased man (and woman) power.

In 2004, integrators also reported that the number of business locations increased, perhaps in response to increased merger activity and to improve customer service.

Overall, systems integrators appear to be optimistic in their economic outlook for their companies but realistic in the labor and overhead resources that will be necessary to achieve their goals.

SDMâ€™s Top Systems Integrators Report defines integrators as businesses that derive more than half of their revenue from the sale, design/engineering, installation and service of multi-technology electronic security systems, such as access control and video surveillance. Some companies ranked in this report are part of larger corporations that encompass more than electronic security systems integration. In these cases, the reported revenue reflects only the systems integration portion of that companyâ€™s business. Five firms are ranked both in this report and the SDM 100 (SDM, May 2005). These companies were asked to split their revenue into systems integration and alarm and reported those revenues to the SDM Top Systems Integrators report and the SDM 100, respectively.

The difference also may be attributable to the 30,000 new projects reported in 2003 by NetVersant Solutions Inc., Houston. This year, the company estimated 3,000 new projects, and in 2002, it did not give a figure.

Reported employment has increased substantially from last year. In 2004, 94,276 full-time employees were reported compared with 77,210 last year. More complete responses by most systems integrators may result in part of the increase. For example, this year, SimplexGrinnell has reported 11,500 employees compared with not reporting any last year. However, that still leaves an increase of 5,566 employees from other integrators.

Asked to choose five or fewer markets from which a significant portion of their 2004 revenue was generated, integrators again, as in 2003, picked health care as their top market. Other vertical markets shifted position over 2003, such as government work, which dropped below industrial and education; retail jobs, which inched ahead of airports; and law enforcement and hotel/hospitality, which moved ahead of transportation/distribution and correctional.

*Percentage of Top Systems Integrators who named this market as a significant source of 2004 revenue.

SDMâ€™s Top â€œSystems Integratorsâ€™ revenue improved 12 percent in 2004 compared with 2003. Although not as impressive as 2003â€™s 20-percent growth rate and 2002â€™s 41-percent growth rate, it still is significant, especially in light of the changes in reporting revenue from some of the largest systems integrators. Some are reporting their integration revenue as level with last yearâ€™s due to changes in their reporting of fiscal years and others are not breaking out their system integration revenue separately at all. Of the Top 100 systems integrators listed here, 58 companies reported revenue increases, 19 reported decreases and 7 reported the same income.

The Source of the Top Systems Integratorsâ€™ Report

SDMâ€™s Top Systems Integrators Report is compiled from questionnaires answered by more than 100 companies which then are ranked by their 2004 total annual revenue, which is rounded to the nearest hundred-thousandth. Included in the table is: