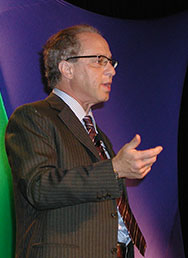 Keynote speaker Ray Kurzweil, an inventor, author and technology trendsetter, opened CEDIA Expo 2005 in Indianapolis with his expectations for technological progress during the first quarter of the 21st century.

He anticipates that the 2020s will be the golden age of nanotechnology, when microscopic machines placed in the human body and bloodstream will aid biotechnology and help conquer diseases, and predicted that by 2010 computers would disappear and information would be written directly to people's retinas. Attendance at the expo reached an all-time high, reported Billilynne Keller, CEDIA executive director.

See You on the Road

2020 Systems Integrator of the Year

Welcome to the Future

In our October 2020 issue, we present the 2020 Systems Integrator of the Year. See "4 Lessons From Life & Kaleidescopes" and find out "What You Need to Know About the New Smoke Detector Standards" in this month's SDM Magazine.