State of the Security Industry: Experts Discuss at Roundtable 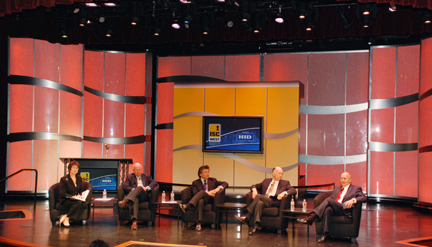 Moderator Sandy Jones (far left), principle consultant of Sandra Jones and Company, is joined onstage by (left to right) Lynn Mattice, chairman of the executive board of advisors for the Security Executive Council; Richard Chace, CEO and executive director of the Security Industry Association; Bill Bozeman, president and CEO of PSA Security Network; and Ed Bonifas, vice president of Alarm Detection Systems Inc. and president of the CSAA; for the State of the Security Industry: Industry Expert Roundtable, held Tuesday during ISC West.
If the last minute location change to the David Spade Theater of the Venetian Showroom for the State of the Security Industry: Industry Expert Roundtable suggested a sense of anticipation for the panel of five noted security professionals, the packed house gave it away â€” and the event did not disappoint.

Mattice, chairman of the executive board of advisors for the Security Executive Council, spoke from the end-user perspective, stating that while budgets were still affecting end users the most, end users were also focused on finding partners who understood their needs "better than they did themselves." He cited regulations and compliance as some of the most problematic issues faced by end users, and he asked the security industry work to better understand them and help end users meet them.

The “monetary flame” is being kept alive by stimulus projects and a continued presence of Department of Homeland projects, noted Chace, CEO and executive director of the SIA. He added that while it was impossible to underestimate the impact of the recession, the industry also had to be vigilant with a Democratic government in place because regulations have a tendency to kick up with Democratic governments. He cautioned the entire industry to pay attention and be ready to fight regulatory battles. 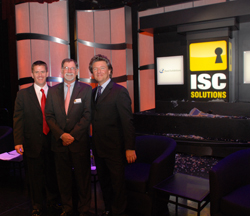 Ed Nichols and Dennis MacDonald of Reed Exhibitions/ISC join Richard Chace, CEO of the Security Industry Association, following the announcement of ISC Solutions, a new show concept that replaces ISC East.
Bonifas, vice president of Alarm Detection Systems Inc. and president of the CSAA, noted that the only constant is change and that success relied on staying flexible to change â€” using it to your advantage and not letting it become a disadvantage. When discussing the changes forced by the recession, Bonifas said that the economy may never bounce back to pre-recession levels, and companies should be prepared to continue operating leaner and meaner with better go-to-market strategies.

The event concluded with the announcement that ISC Solutions, a reinvented event, will replace the ISC East Expo held at the Jacob Javits Convention Center in New York City. ISC Solutions will take all of the new products that are announced at ISC West at the beginning of the year and present solutions and applications for them in emerging vertical sectors. This year, the sectors covered at ISC Solutions will be healthcare, retail, education/campus, and government. ISC Solutions has partnered with several organizations to help build the educational content. For information visit www.iscsolutions.com.