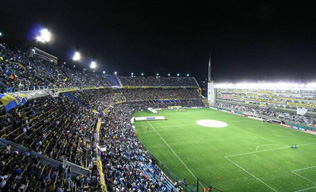 Boca Juniors, the owner of the stadium, required that the surveillance cameras gave users the ability to track and zoom in on individuals. For instance, the cameras should be able to help the security staff to determine who are involved in the event of incursion or theft, or arguments among event-goers and identify whether these altercations would interfere with the running of games or events.

Boca Juniors decided to use Hikvision’s surveillance solution consisting of standalone DVRs, PTZ high-speed domes and color cameras to secure the stadium. These units allow the security staff to effectively monitor the on-site status throughout the stadium such as the football ground, entrances and exits.

The project offered a 24/7 surveillance solution by using PTZ speed domes together with fixed units. Inside the stadium, the PTZ high speed domes were preferred for 360-deg. monitoring. The PTZ domes offer high quality video in the resolution of 480 TVL as well as feature 400-deg. per sec. pan preset speed and 150-deg. per sec. tilt preset speed, these allow the security staff to quickly track and zoom in on individuals to acquire details clearly, and take rapid action. By contrast, the fixed color cameras were installed at the stadium entrances and exits.

Visitors can see the cameras and know someone is monitoring them. This acts as a deterrent against petty criminal acts such as vandalism, theft and sneaking in without a ticket. According to a press release, people are less likely to do so as they knew that the video footage could be used as evidence. Quarrels or arguments among audiences during shows, concerts and other events can be observed as well.

As there are many monitoring points in different locations throughout the stadium, the surveillance system needed to support multi-channel video viewing to monitor the on-site status. To accommodate this, Hikvision supplied embedded DVRs that feature 16-channels video preview on one screen simultaneously. The DVRs also support video loop out on TV wall, enabling the security staff to have a clearer view on what is happening in the stadium through TV wall. In addition, with main and auxiliary video output, the DVRs can simultaneously support GUI operation and video preview (through auxiliary video output) for on-site status monitoring on a separate screen.

“Hikvision’s surveillance solution has a positive effect on protection of the stadium,” said Lic. Christian Uriel Solano, president of Security One Argentina, Hikvision’s distributor responsible for this project. “Now we can provide a more secured environment for people who come to events held in Alberto J. Armando Stadium, that’s exactly what we are pursuing.”