Southern Alarm Ahead of the Curve as Guardian Authorized Dealer 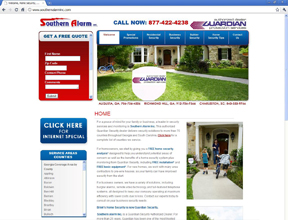 Back in early September, Warrendale, Pa.-based Guardian Protection Services, ranked No. 9 in the 2010 SDM 100 Report announced that it signed the former No. 3 Broadview dealer in the United States, Southern Alarm Inc., Savannah, Ga., as an authorized dealer. SDM had a chance to catch up with Hank Groff, national director of Guardian’s Authorized Dealer program, and Kelley Clements, president and chief executive officer of Southern Alarm to learn more about the catalysts for this partnership, the collaborative relationship that makes it successful, and how they’ve been doing so far.

According to Groff, Guardian Protection Services is rapidly expanding its national footprint and looking to bring dealers across the country into its authorized dealer program. Southern Alarm’s location in Georgia and the alignment of the two organization’s business models and philosophies made for an ideal partnership.

For Southern Alarm, an important factor in selecting Guardian Protection Services’ dealer program was product offerings. As Broadview’s equipment was proprietary, Clements relates he knew his company would be faced with big, fundamental changes. In the end, UTC Fire & Security (formerly GE Security) offered the most competitive pricing and comprehensive training, the company concluded. “It’s definitely a higher-end product. GE Security is on the cutting edge. GSM, Z-wave, light controls â€” you name it, they have it.”

Groff explains Guardian Protection Services has a very strong relationship with UTC, “They’ve made a concerted effort to lend a lot of resources, such as training for dealers and competitive pricing.”

Rich Villafane, a national trainer for UTC who is coincidentally based in Georgia, and Groff himself, who was an ADT trainer for 10 years, have contributed a lot of their time to personally train and offer support for Southern Alarm managers and employees in technology, sales and marketing, Clements says. “You won’t be left alone,” Groff adds. “We will invest resources to help dealers grow their business. Some of it is webinar based and sometimes we will fly in.

This support and training are a key facet of Southern Alarm’s mission to rebuild a stronger foundation to grow on during this transition. Changing vendors and product lines, according to Clements, is “almost like starting from scratch.” Part of the plan to rebuild is a massive hiring campaign which Southern Alarm is conducting locally but receiving support from Guardian, Clements says.

Clements relates he was very impressed with Guardian’s operations. “I took a trip to Pennsylvania and I met with all the staff there. I found they were very, very customer oriented. Their dealer accounts are treated as any other Guardian corporate account. On customer service calls, they let me in and I can see how everything was handled. They go above and beyond to maintain customer happiness.

“The second thing was their funding matrix,” Clements adds. “I found it is second to none.”

Roughly six weeks into the partnership, both sides say things are going along very well. In the first month into this program, Groff says Southern Alarm has been very consistent in terms of their numbers, generating upwards of 100 accounts. “With every dealer leaving a dealer program â€” there’s a learning curve. Kelley is ahead of that curve.”

According to both Clements and Groff, the Broadview legacy was an important determinant that Guardian Protection and Southern Alarm were a good fit for this kind of partnership. Clements comments that Guardian has, “similar customer service practices to what we were accustomed at Brink’s [Broadview].” Maintaining a solid customer base and controlling attrition are priorities for Southern Alarm, and Guardian’s attention to detail and superior customer service will support those goals. “It’s not just a volume game; what they’re looking for is quality.”

Groff adds, “The biggest strength that all Brink’s [Broadview] dealers bring is their ability to do such a good job of servicing accounts. Finding good dealers who can provide service and that you can rely on is one of the big challenges in this dealer program. Because of Southern Alarm’s track record of high-quality service after the sale, it was the right kind of fit for Guardian.”

Path to Growth by a College Entrepreneur, Motivated Skier & Past Dealer of the Year

Putting Business on a Diet Helps Dealer Through the Recession

Alarm Management: Trends That Are Changing the Alarm Industry Forever

2020 Systems Integrator of the Year

Welcome to the Future

In our October 2020 issue, we present the 2020 Systems Integrator of the Year. See "4 Lessons From Life & Kaleidescopes" and find out "What You Need to Know About the New Smoke Detector Standards" in this month's SDM Magazine.