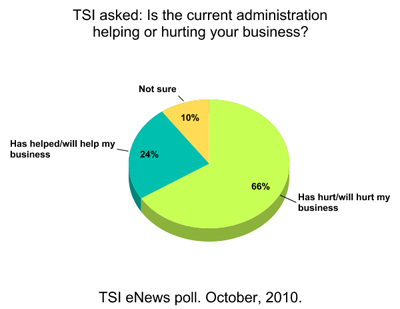 In a recent poll conducted through Today’s Systems Integrator eNews, we asked security industry professionals how they believed the policies and initiatives put in place by the current administration have affected their businesses. In an audience of integrators, dealers, consultants and manufacturers, 24 percent believe these policies have or will help their businesses in the future, 66 percent responded they have hurt or will hurt their businesses and 10 percent answered they were not sure.

The healthcare reform bill, passed in March of this year, was mentioned as a major concern by 18 percent of poll respondents. While small businesses are theoretically protected from rising healthcare costs, Congress’ attempts to draw the line separating these small businesses from everybody else have rendered the group increasingly exclusive.

“First of all, we know our costs will increase significantly; the only question is ‘how much,’” says John Cerasuolo, president and COO of ADS Security, Nashville, Tenn. “Secondly, the quality of care will be reduced and wait times will increase as millions of newly insured people try to obtain more care.  Finally, all of this uncertainty will result in many of our customers postponing decisions on growth and reducing our potential revenues.”

While some will struggle in the coming years to continue to provide health care to their present and future employees, others are concerned they will not be able to hire necessary new employees. Some may have to choose between layoffs and discontinuing medical insurance altogether. An anonymous poll-taker said he will no longer be able to “afford insurance. Rates have increased at least 25 percent.”

Cerasuolo adds, “The uncertainty created by the new health care law and the attempts to pass cap and trade have created an environment where many of our customers have cancelled or postponed projects. The anti-business rhetoric of the administration has business people on the defensive and hesitant to make investments in their business. How can they expect businesses to plan and grow when we don’t even know what our marginal tax rates will be on January 1st?”

Another significant worry for businesses which may not quite fit into restrictive small business categories is taxation increase and uncertainty. Many echo Cerasuolo’s statement, saying investment and growth are not possible in the unpredictable environment created by the Obama administration’s tax policies, which include suspending Bush-era tax breaks and instituting small business tax credits for new hires â€” which many claim isn’t enough.

Still, some security companies have seen increased business stemming from ARRA (American Recovery and Reinvestment Act) funding. In the security industry, stimulus funding is creating some opportunities for firms that participate in the transportation, education, and energy efficiency sectors. According to the official ARRA web page (www.recovery.gov), 91 percent of funds have already been made available.

“The current federal government policies and initiatives have helped stimulate the economy, given those who are unemployed some hope in this recession,” says another poll respondent. “In turn, consumers, businesses are not as afraid to spend money, which helps the economy.”

According to the majority of security industry respondents, however, the stimulus plan has failed to truly stimulate the economy, especially in the new construction sector.  “Most of the funds were wasted on transfer payments to entities that were favored by the administration,” Cerasuolo says.

The discrepancy is alarming for an industry which is largely in the small- to mid-size business range, but may not make the small business cut-offs for health care and tax relief. Infrastructure, where most stimulus funds are going, are not necessarily areas where all of the security industry can participate, especially while financing options are so limited.

“The administration’s actions have helped large financial institutions and a few large manufacturing companies,” says another poll respondent. “Small and mid-sized companies have been frozen out of the borrowing market, thus severely limiting their ability to operationally function and expand.

Main Street
has yet to benefit.”

At the same time, where there are project opportunities, integrators are in continuous competition, and that freeze on lending has repeatedly forced customers to select the lowest bids as the “best option, which isn’t always true,” says one of the poll respondents.

One poll-taker warns against not giving credit where credit is due for the current lending crisis. “[Obama]’s cleaning up 16 years of being in the bushes. I will grade him when he finishes his test in eight years.”

In the current crisis, however, that kind of optimism is scarce. Cerasuolo adds that “the aggressive regulatory posture of this administration is yet another roadblock placed in the path of our businesses. Customers very dependent on energy costs might be very hesitant to expand and grow if they’re concerned their energy costs will go up in the future.  Instead of vilifying business people, our government needs to recognize we are the engine that drives our economy. Unshackle businesses and they will pull us out of our current financial mess.”

Alarm Management: Trends That Are Changing the Alarm Industry Forever