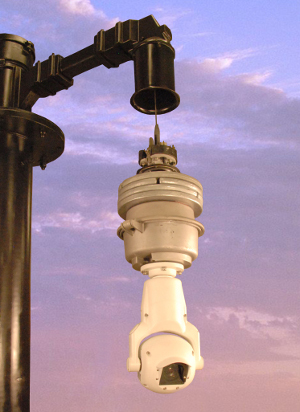 “With their rugged design, MIC Series 550 cameras are rapidly gaining popularity for monitoring roadways around the world,” said Willem Ryan, senior product marketing manager, Bosch Security Systems Inc. “MG Squared’s advanced technology provides customers with the ability to mount our equipment at the best heights and locations for their traffic surveillance requirements while providing easier and safer access to the cameras for any future maintenance needs.”

With a Lowering System from MG Squared, MIC Series camera installation and maintenance can be performed on the ground by one technician, eliminating the need for bucket trucks, cone crews or lane closures. This provides tremendous cost savings as well as a more efficient and safer work process, Bosch said. It also frees design engineers from previous limitations on mounting heights, as pole and camera locations are no longer determined by where or how high a bucket truck can reach.

MIC Series cameras provide 550 TVL resolution with 36x or 28x optical zoom. The flat window with a long-life silicone wiper and optional washer system enables customers to capture images that are free from distortion in dry and wet conditions, the company said.

Built to survive harsh environments, MIC Series cameras feature an IP 68/NEMA 6P-rated housing to ensure complete protection against dust and water ingress without the need for pressurization. And, for reliable operation in tough roadway applications, the cameras can withstand 130 mile per hour sustained winds and gusts up to 180 miles per hour, as well as shock and vibration up to 20g and 2.0g respectively.