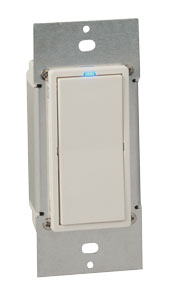 HAI by Leviton launched its Compact Fluorescent Light (CFL) and Light Emitting Diode (LED) Dimmer. The device is UL-listed for CFL and LED bulbs with the ability to control up to 600 Watts of incandescent or Halogen bulbs. The 600W CFL/LED Dimmer (part number 35A00-1CFL), features a dimming curve that is optimized for CFL and LED bulbs to provide smooth dimming throughout the entire range. The CFL/LED Dimmer also features a minimal brightness level to prevent the bulb from flickering and an auto-off feature ideal for pantries, closets and other spaces where light is not always needed. A small LED on the switch will blink when the switch is timing out. The 600W CFL/LED Dimmer is available in almond, light almond, black, brown, grey, ivory and white. Additionally, the CFL/LED Dimmer uses a standard Leviton Decora style wall plate. The CFL/LED Dimmer is available in a case of 12.