1.         The first state to adopt statewide enhanced call verification was

2.         Enhanced call verification is the attempt by monitoring facility personnel to verify that no emergency appears to exist at the monitored premises by means of more thorough procedures such as dispatching personnel or a neighbor to verify the alarm activation.

5.         When used in the context of dispatching the authorities, the term “immediately” usually means

d.         as soon as possible for the operator to read and understand the emergency signal and what response is needed.

6.         Upon receipt of a carbon monoxide alarm, the central station operator should take the following steps in what order?

a.         Make notification to emergency contacts.

b.         Notify the fire department or other designated emergency forces.

d.         Advise whoever answers at the premise that the fire department is on its way.

7.         The standard that outlines the steps for the question above is

10.       The reason monitoring stations should be concerned with a reduction in false alarms is

a.         the potential threat of non-response if false alarm dispatches are not curtailed.

c.          the perceived degraded reliability of alarms in general.

8.         The standard produced by ANSI/CSAA that is directed at false alarm reduction through verification is known as

14.       When any operator’s call reaches an answering machine, a message should be left clearly stating that it is the alarm company calling and leave necessary information for the alarm user to promptly contact the monitoring facility.

11.       When using enhanced call verification methods, which of the following statements is true?

d.         First call to the premise, second call to a number other than the premise designated by the subscriber, third call to the police, subsequent calls to someone on the emergency contact list.

13.       One organization that has been instrumental in the effort to work with responding officials in a proactive manner has been

15.       Control panels that have been designated as CP-01 compliant may not be used on UL commercial installations due to a conflict of terms between the UL standards and CP-01. 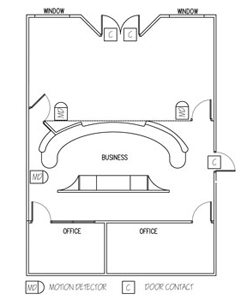 A technician went out to service an installation that was creating false alarms. The police warned the customer that they would no longer respond if the system wasn’t fixed. When the technician surveyed the premise this is what he found.  Do you recognize the problem? What do you think the technician did?  What remedy, if any, can you determine from the layout? 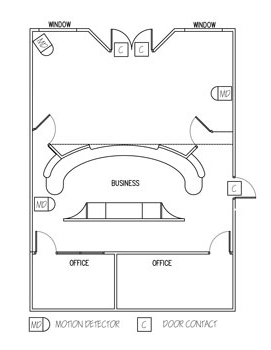 Answer to: What’s Wrong With This?

Here are the answers to 5-Minute Tech Quiz which appears on page 90.