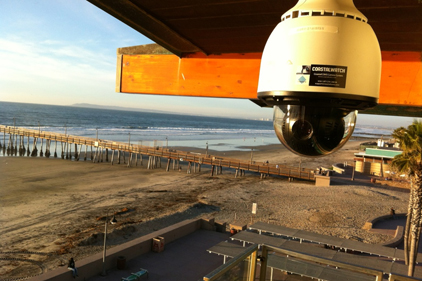 As San Diego County works to replenish eroded sand banks on its most beautiful and iconic beaches, the potential financial impact of any mistakes or delays on Southern California surfing resources is a concern. The Surfrider Foundation San Diego Chapter partnered with CoastalCOMS to install digital cameras networked with Milestone XProtect® Corporate to monitor wave breaks and sand lines.

“Dealing with such an important aspect of Southern California’s economic and environmental ecosystem, it was imperative our technology enabled an accurate assessment of the beach replenishment monitoring and its impact on the waves. There has not been another beach-monitoring project of this scale or sophistication, so we needed a solution that would be reliable, functional and affordable. Our integrated Milestone/CoastalCOMS solution empowers Surfrider volunteer monitoring programs and gathers baseline data necessary for environmental impact assessment and the protection of coastal resources.” Tim Chandler, president, ClickVMS International, CoastalCOMS U.S. distributor.

Every day, sand from the beaches of the Southern California Coast is washed away and displaced due to natural wave activity and human traffic. Every ten years or so, a task force is assigned to dredge sand from the ocean and adjacent beaches for restoring the shoreline. Changing the underwater topology, however, could adversely change the wave patterns and surf breaks in the water. Multiple parties including surf activists and government agencies seeking to protect the natural resources and wave patterns, wanted to ensure their beloved sport and the local economy remained unaffected during and after the project.

The Surfrider Foundation informed the California Coastal Commission about the potential dangers to surfing resources and partnered with ClickVMS/CoastalCOMS to develop a monitoring solution. The CoastalCOMS-hosted analytics monitoring system with remote access is based on Milestone XProtect Corporate video management software (VMS) and multiple, strategically placed digital cameras, reporting on wave breaks and changes in sand lines. Volunteers monitor the beaches daily and will relate any changes during the two-year project.

With the need to store a vast amount of video data — waves and sand information from daily monitoring — optimal storage was one of the top priorities when choosing Milestone. For scientific reporting, the ability to archive, replicate and distribute beach condition information was important. The affordability through efficient handling of these tasks via hosted/managed IP surveillance, as well as the open platform of XProtect, allowed Surfrider and ClickVMS/CoastalCOMS to operate 100 percent from the cloud utilizing their choice of hardware for each remote site.

The Surfrider Foundation teamed with ClickVMS/CoastalCOMS to develop this civic-minded project, with hopes to continue monitoring the surf to ensure minimal adverse effects. The combination of a grant with funds from the Surfrider Foundation allows the group to monitor the current sand fill project for two years. The goal: show the Coastal Commission how monitoring surf and sand can benefit the community and livelihoods of Californians, convincing the local agencies to continue monitoring after the initial two years.

The Handbook for School Safety and Security

Physical Security and Safety: A Field Guide for the Practitioner