The global market for enterprise and IP storage used for video surveillance is surging and in 2017 will reach just under $2.5 billion — nearly $1.5 billion more than in 2012, says Sam Grinter, technology market analyst for IHS.

Among the reasons behind this strong growth is end users placing greater value on video surveillance data because of video’s increasing use for business intelligence applications and as evidence to defend against lawsuits. In each case, investment in storing video for more time or at a higher quality can provide end users with an increased ROI.

Another factor impacting the market for enterprise data storage is legislation around the world. As an example, IHS cites Germany’s increasing the maximum retention time for video from 24 hours to 48 hours, effectively doubling the maximum capacity requirement of video data storage systems. In India’s Andhra Pradesh state, all establishments where a gathering of 100 or more is expected must provide video surveillance protection under a law passed in 2013.

As for technologies, network attached storage (NAS) is forecast to increasingly compete with storage area network (SAN) solutions. Technological development of NAS is making it more comparable in terms of performance with SAN. NAS is also typically more cost-effective to install and maintain compared to SAN. With price being a major factor in the buying decision of video surveillance, IHS forecasts strong growth for NAS solutions over the next three years. 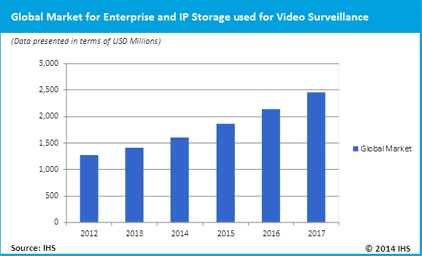