As electronic security, life safety and access control continue to become melded into clients’ IT networks, the functions and properties of a particular client’s network devices need to be scrutinized by systems integration engineers and installers.

The basics of networking are now well known to most industry professionals. The network switch is the central “heart” of a network, connecting many devices (PCs, printers, etc.) to each other and potentially to the internet via cabled Cat5e/6 or Wi-Fi connections through connected Wi-Fi access points. And the switch may well be connected to a router/internet interface providing access to all the good and bad that’s available from the internet.

In the case where a customer has a large network, multiple network switches can be linked together to provide communications paths for remote devices connected to separate switches. The client may have two or three switches stacked together in their telecom room, and/or the switches may be physically separated in separate rooms, on different floors, or even nearby buildings. Such connections between switches are commonly called the “backhaul” or the “switch fabric.”

“Where the SFP modules can intersect with the physical security system is usually in a video-heavy system, where multiple video streams are being sent from dozens of cameras across the switch fabric to remote recording and viewing equipment.”

In the larger networking world, the thrust is towards larger bandwidth communications in the backhaul. Individual PCs and smart devices may be communicating with “their” switch using 10/100/1000 Ethernet. If the switch fabric’s connections are also 10/100/1000 Ethernet it is quite possible that if a number of devices are communicating through the switch fabric simultaneously there may well be a slow-down or stoppage of communications, as there is only so much bandwidth available.

That’s why the IEEE and other bodies have created 10 gigabit (10GE), 40 gigabit (40GbE) and 100 gigabit (100GbE) standards to potentially boost the communications bandwidth between devices and switches to much higher bits per second rates. And many IT managers want (or think they want) higher backhaul bandwidth.

The problem is one of cost and lost production. Changing out switches means buying higher priced switches and taking down all or part of a network when the switches are swapped — and nobody is going to be happy about that.

In many ways the manufacturers of network switches and hardware such as TRENDnet have been ahead of the game for years, and have included “open” ports (usually two) on their switches. These ports support Small Form Factor Pluggable (SFP) modules that can be plugged into a switch, connected to another SFP on another switch, and the back haul bandwidth can be boosted quickly and easily. So, IT communications bandwidth can be greatly increased at minimal cost and installation time. The reason for two SFP sockets on a switch is that multiple switches may need to be connected in an A to B to C arrangement, with switch “B” needing one SFP to communicate with switch A and another to hook up to switch “C.”

What makes SFP modules cool is that they are pretty inexpensive with 10 GbE modules priced less than $30 each (keep in mind that you’ll need a compatible one at each end of the connection). They are also “hot swappable” so the network need not be completely disabled when the switch fabric is boosted by the installation of the new SFP’s. If an existing switch doesn’t have an SFP port one can be added for less than $100. 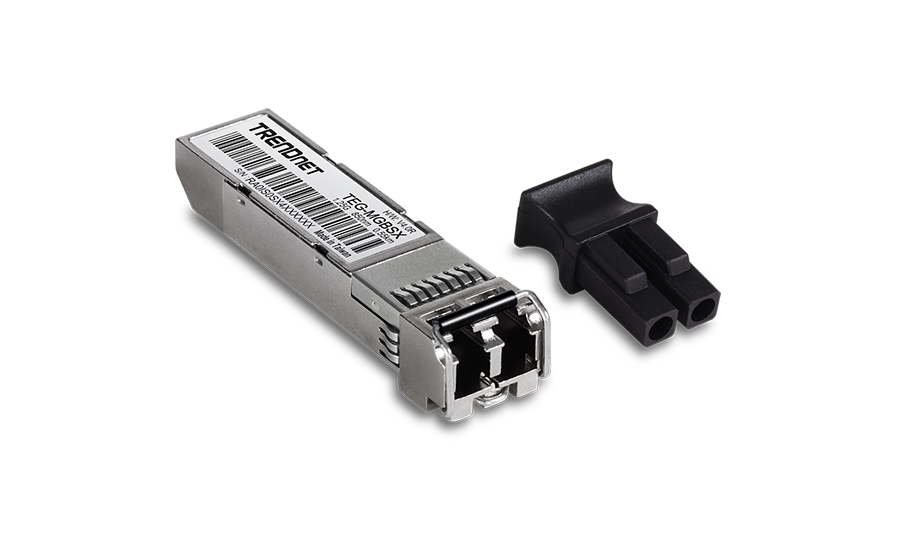 SFP modules can be obtained with singlemode, multimode, or copper 8P8C connectors. // IMAGE COURTESY OF TRENDNET


We are starting to see some manufacturers such as Axis include open SFP sockets in some of their cameras, and the usage of these inexpensive connectivity boosters is bound to grow.

Where the SFP modules can intersect with the physical security system is usually in a video-heavy system, where multiple video streams are being sent from dozens of cameras across the switch fabric to remote recording and viewing equipment. With a lot of video streams in the pipes, clients may need to upgrade their backhaul technology to effectively carry the video signals without causing bandwidth issues with the client’s other users.

SFP modules are typically connected with dual multimode fiber optic links (send/receive), but they can also be found with singlemode or even 8P8C RJ-45 structured cable. The devices power from the switch they are plugged into, so there’s no concern about separate power needs.

If a switch is connected to another via a port-to-port 10/100/1000 Cat5e/6 cable, and the switches have open SFP sockets, it can be a simple matter to upgrade the clients backhaul by connection of 10GbE SFPs. 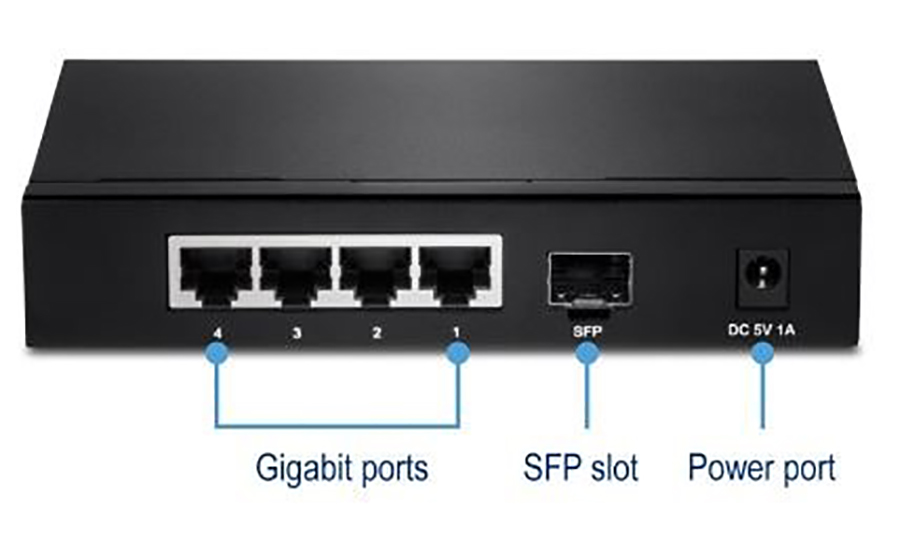 TRENDnet makes an inexpensive 10 Gig Ethernet mini-switch with an SFP socket. This switch could be added to an existing IT network switch fabric to provide higher bandwidth. In this use there will need to be one switch installed in each connected telecom closet, both with matching SFP modules. // IMAGE COURTESY OF TRENDNET


But, just like everything else in our world, the devil is in the details. If contemplating installing and/or changing out SFP modules, the first thing to do is to identify the individual switch manufacturer(s) and their part numbers. It’s critical that the “correct” brand of SFP that is supported and recommended by the switch manufacturer is used. Using the “wrong” SFP brands may result in a quick hang up from the switch vendor’s tech support if there’s a problem, as they will likely say they “don’t support SFPs from XYZ corporation.”

In most cases two multimode fiber optic links are used to connected the SFPs together; if the fiber isn’t there it may have to be installed. If planning to use existing fiber optic links it’s critical to test them for connectivity quality and to possibly repair or replace them if necessary.

If the above criteria have been met, it can be a simple matter to boost your client’s large network bandwidth with minimal cost by swapping or installing new SFP modules. We are going to be working with these clever devices for a long time, so we better get used to using them effectively.