What You See Is What You Get

It’s an obvious fact that almost all modern communications and connectivity use the internet and Wi-Fi devices. Whether it’s a streaming media stick in the back of your video monitor or a wireless IP camera, just about everything has some wireless connection to the internet.

Internet Service Providers who bring “high-speed” bandwidth to businesses and homes using a variety of fiber optic and copper connectivity usually offer end users certain amounts of uplink and downlink bandwidth for a monthly charge that varies with the bandwidth being provided. This bandwidth offering is commonly called an SLA or Service Level Agreement.

Since the Slayton Solutions Ltd. universal headquarters in Chicago has been connected with “Fiber to the Home” our internet bandwidth has greatly increased. But am I receiving the amount of bandwidth that I am paying for?

It can be an easy process, using any of a number of free online testing websites, to verify the broadband uplink and downlink of a particular website. Some of these web-based testing programs can be quite sophisticated, providing packet loss, skew, and other common issues that can occur in internet connections.

‘The beauty of the AirScout GigaCheck testing is that it provides concrete numeric testing of Wi-Fi performance that can be shown to the client.’

While a customer may have a large-bandwidth internet connection, they often cannot use the bandwidth available because of limited Wi-Fi connectivity. There are any number of issues that can impair Wi-Fi connectivity. One common issue is the location of the combination router/Wi-Fi access point; while it should be located in the center of the area to be covered, in most cases the router is located where the internet connection is brought into the building — putting the router in a corner or closet that is not close to the center of the location. Another problem is customers’ Wi-Fi devices themselves; while a new router/Wi-Fi access point may provide 5 GHz 802.11ac bandwidth, if a customer’s Wi-Fi device is more than a couple of years old it likely supports older Wi-Fi standards such as 2.4 GHz 802.11n. In this case the client device can only provide the Wi-Fi bandwidth it supports, limiting the devices’ throughput on the internet.

Low-voltage contractors need to be capable of thoroughly testing clients’ internet and Wi-Fi coverage. Tempo Communications (formerly Greenlee Communications) is delivering a simple-to-use and extremely effective Wi-Fi testing system called the AirScout Gigacheck. I have connected and tested the residential version and give it the highest marks for simplicity and functionality.

The device is very simple to set up and use. First, charge the GigaCheck module before going to the client’s location. The GigaCheck module is temporarily hardwired via Cat5e/6 jumper to the client’s internet router. After collecting the client’s SSID and security code, a smartphone is programmed to communicate to the access point. The GigaCheck module will reward the technician with two green lights and we’re ready to test. The first test is usually through the module and hardwired connection to test the SLA that the client is receiving from their internet provider. Then the module is disconnected and starts to provide Wi-Fi properties and strength measurements. 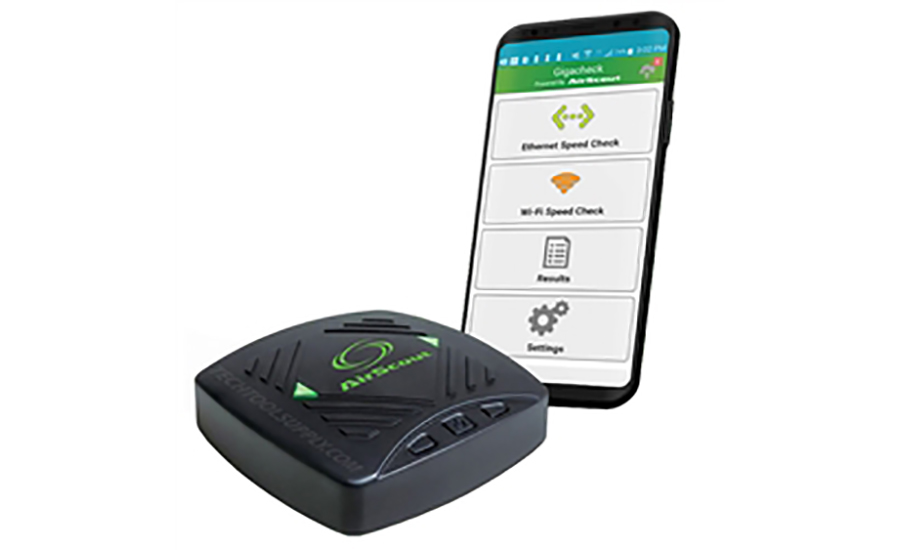 Carrying the Gigacheck module and the connected smart device a technician can walk around a house or building taking readings of Wi-Fi connectivity, and internet throughput via the client’s Wi-Fi.

The beauty of the AirScout GigaCheck testing is that it provides concrete numeric testing of Wi-Fi performance that can be shown to the client, which smart technicians can use to lead the customer into upgrading their Wi-Fi coverage via a new router/Wi-Fi access point, or the installation of more access points to cover problem areas.