The Authority Having Jurisdiction (AHJ) is headed in the right direction, because of the nature of this dangerous gas. Many people are sickened by carbon monoxide and donâ€™t even know it, or others are taken to hospitals and doctors and really may not know what caused their illness.

For the professional security installing dealer, the market for carbon monoxide detection offers many possibilities. Not only are multiple detectors required for different areas, but these devices generally must be replaced about every five years. In addition, for monitored detectors, the supervision of these devices can bring additional recurring revenue into the monthly monitoring mix. Units today can signal trouble at their stand-alone unit or keypad, and also send a signal to the central monitoring company.

Carbon monoxide (chemical symbol, CO) is a byproduct of incomplete combustion. Sources of CO include malfunctioning appliances, such as furnaces and stoves that burn fossil fuels like natural gas and propane. Other sources include vehicle exhaust, blocked chimney flues, and gas or charcoal grills that are used in the home or in an unventilated tent, camper, or garage.

Carbon monoxide detectors have advanced significantly since they first came on the market. Their circuitry has become more stable, and microprocessor and other sensing technologies have advanced. Bio-mimetic sensors imitate human blood cellsâ€™ absorption of CO with 99 percent accuracy, according to manufacturers. Electronic systems use a microcomputer to measure the danger level, which calculates amounts of carbon monoxide coupled with the time of exposure. Finally, electrochemical detectors measure target compounds in the air, such as the CO.

Even UL purports that detection is the best defense against carbon monoxide poisoning. According to the agency, more than 500 people in the United States are killed each year in carbon monoxide-related incidents, and of that number, more than 200 by carbon monoxide emitted from a consumer product, such as a stove or water heater. Another 10,000 make hospital emergency room visits for treatment of CO exposure. The best way to prevent CO poisoning is detection. UL recommends every home have a working, listed detector installed. 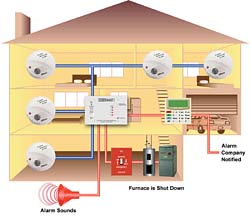 More than one carbon monoxide detector is necessary to adequately protect a home. UltraGuard automatically shuts down the source of CO, such as the furnace or hot water heater.

â€œA CO alarm is designed to detect elevated levels of the gas in the home and warn you and your family of a potential poisoning risk,â€ says John Drengenberg, ULâ€™s Consumer Affairs manager. "It's better to have it and not need it, than need it and not have it.â€

And this is, quite frankly, what the industry is hoping for, as the manufacturers and others appeal to consumers, warning them of this potentially deadly gas. In many ways, the trend to install carbon monoxide detection resembles that of the smoke detection industry some 10 years ago. At that time, many cities, states, and AHJs were mandating the use of smoke detectors on every living level and more, in new as well as retrofit residential applications.

â€œItâ€™s the No. 1 source of poisoning in the U.S.,â€ says Rick Cullwell, director of sales and marketing, Macurco Gas Detectors, Englewood, Colo. â€œThe devices have been around, but mainly for commercial applications. Now, they are being required in new residences and older homes as well,â€ he says. â€œCarbon monoxide is where smoke detection was years back as far as peak of awareness,â€ he adds.

Cullwell says units have become more reliable, and more testing has been accomplished to account for variables as they may happen in the field. False alarms were an early issue, but many in the industry account for extremely low sensitivity settings rather than inherent problems in detectors themselves as the culprit of widespread false alarms.

â€œItâ€™s one of the hottest trends in the residential market,â€ says Geoffrey J. Winters, president of Electronic Control Systems (ECS) LLC in Greenwich, Conn. â€œWithin a few years, the CO market is expected to be three times larger than the smoke detector market. The opportunities will be endless for the installer,â€ he says.

For the alarm dealer, a professionally installed carbon monoxide detector can be a necessary part of a home systems package. In addition, multiple, hardwired detectors are required throughout a residence for proper detection, and any detector will have to be replaced, on average, every five years. Finally, in addition to the upgrade and maintenance possibilities with this type of detection, the dealer who is monitoring an account also can provide additional supervision for these types of detectors.

According to Winters, both NFPA and IAFC recommend more than a single detector in the home. In New York, at least one carbon monoxide detecting device is to be located within each room used for sleeping purposes, according to a recent law passed there. In addition, the detector should be â€œreasonably free from false alarms and provide visible indication that the alarm is energized,â€ the New York law states. In February 2003, all homes in New Jersey were required to have carbon monoxide detectors installed. More and more states are now mandating CO detectors in all new homes and in existing homes before they can be sold. In addition to laws in New York and New Jersey, Massachusetts, Rhode Island, Pennsylvania, Texas, West Virginia, Oregon, and others are mandating their use.

And companies in tune to the trend like ECS have taken detection one step further. ECSâ€™s UltraGuard alerts the homeowner of problems, then automatically shuts down the furnace and hot water heater, the sources of 95 percent of all accidental CO deaths in the home, Winters says. The unit works with high or low voltage and also automatically restarts both units once CO has dissipated. It has inputs for four zones in a home and up to 20 detectors, and can be used as a local alarm only. He adds that a combination smoke and carbon monoxide detection unit also may be in the offing from ECS in the not-too-distant future. â€œThe opportunity for the installation of CO detection is huge. Itâ€™s a feel-good product, and now the laws are in our favor,â€ he says. â€œItâ€™s a reliable detection that has improved dramatically.â€

For the professional installing dealer, carbon monoxide detection represents a significant opportunity, especially for those companies that do their part to spread awareness to new and existing customers.

Fiction: CO detectors should be mounted near the floor.

Fact: CO is slightly lighter than air, and detectors should be mounted on a wall about 5 ft. above the floor or placed on a ceiling.

Fiction: Only one detector per house will do.

Fact: Multiple detectors are required, at least on each floor and level and even near every sleeping room.

Fact: Newer homes are sealed more tightly than older homes and may keep more air and gases inside.

Carbon monoxide detectors should be mounted on the walls or ceilings.

The National Fire Protection Association, Quincy, Mass., recently made available the following facts to help people protect themselves against CO poisoning. It is reprinted courtesy Enmet Corp., Ann Arbor, Mich. (http://www.enmet.com). You may use it to educate your customers on the dangers of this type of poisoning.

What is the effect of exposure to CO?

CO replaces oxygen in the bloodstream, eventually causing suffocation. Mild CO poisoning feels like the flu, but more serious poisoning leads to difficulty breathing and even death. Just how sick people get from CO exposure varies greatly from person to person, depending on age, overall health, the concentration of exposure (measured in parts per million) and the length of exposure. Higher concentrations are dangerous even for a short time.

What is your risk of CO poisoning?

According to the NFPA, there were 242 CO-related non-fire deaths attributed to heating and cooking equipment in 1991. The leading specific types of equipment were:

What are CO detectors?

Carbon monoxide detectors measure how much CO has accumulated. Currently, CO detectors sound an alarm when the concentration of CO in the air corresponds to 10 percent carboxyhemoglobin level in the blood. Since 10 percent COHb is at the very low end of CO poisoning, the alarm may sound before people feel particularly sick.

Detection is the best defense against CO poisoning, according to Underwriters Laboratories.

What Dealers Must Know About CO Detection

Life Safety: All in a Days Work