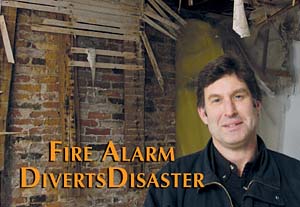 Carl Spiegel, president of A.S.P. Security Systems, Waterford, Conn., and winner of the 2004 SDM/NBFAA First Line of Defense Award, used to be quite involved in teaching for the National Burglar and Fire Alarm Association when the National Training School was first developed back in the 1980s. Spiegel was a regional training coordinator, so he went around to the various states in New England setting up classes and training other instructors on the dangers of fire. â€œOne of the teaching aids that we had was a video tape produced by the NFPA [National Fire Protection Association], and it was called â€˜Fire: Countdown to Disaster,â€™â€ Spiegel recalls.

This familiar video dramatically demonstrates what happens in a home fire. Essentially, the NFPA built a room inside of a test laboratory, and furnished it with mundane items from a bedroom: bed, dresser, lamp, chair, carpeting, curtains, and the like. A smoke detector was centered in the ceiling, a clock was mounted outside, and an electric heat coil was placed under the chair cushion, thereby simulating someone dropping a cigarette. Then they started the clock. The video shows wisps of smoke coming out, the wisps of smoke get bigger and bigger, the smoke beginning to collect at the ceiling, and then a flame starting.

Within two minutes, the fire reached the flashover point: i.e., the spontaneous ignition of hot smoke and gases. Within 70 seconds it set off the smoke detector in the room, and at some point thereafter, the temperature at the ceiling was around 500 degrees, and at the floor it was hot enough to boil water.

â€œI used to say to the people who had been through those National Training School classes, â€˜you need to pay close attention to this video because it is such a dramatic way of demonstrating how dangerous fire is, and how quickly it moves.â€™ And now I say to those who work for me at A.S.P. Security Systems, â€˜you need to be very diligent and very professional in your installations because, as this video shows, your work is very important,â€™â€ Spiegel says.

Last autumn, one of Spiegelâ€™s customers learned just how important it is.

In 2001, a waterside house owned by the Vail family in Stonington, Conn., experienced a disaster. The Vails occupied the house during the summer, but in the fall, winter, and spring it was rented by students attending Connecticut College, some 10 miles away. That year, one of the students, apparently smoking, had dropped a cigarette, and ended up melting a piece of carpet on the third floor. That incident made the homeowners think about the possibility for latent disaster, and they decided that a fire alarm would be in order.

The following summer, the Vails were referred to A.S.P. Security Systems by their builder, with whom A.S.P. had a working relationship.

A.S.P. Security Systems installed a new fire alarm system in the home. The three-story house was a big, old, rambling structure that had been modified over the years with several additions, so there were structural challenges and difficulties wiring the system, which was done by Spiegel and his son, Steven.

â€œThe installation was no different than most other hard-wiring installations in that we had to be creative in where we drilled holes and how we fished wire,â€ Spiegel says.

The house was completely wired with fire-rated cable and four end-of-line relays to supervise the power on the four zones. â€œThis was a residence, so we used a FBI XL-2T master control because it had room for zoning plus options for future security installations. We used a surface mount XL4600SM, Sierra Mike keypad as an annunciator, and divided the house into four zones: one each for the first, second, and third floors and one for the basement and living area. We installed 12 System Sensor 2112/24AT smoke detectors with internal sounders, and wired it up with a trigger harness and reverse relay, so when the XL-2T went into alarm, it would reverse the relay and sound all the smoke detectors,â€ Spiegel says.

Spiegel installed detectors in the appropriate places for a residential fire system according to the guidelines for UL-listed residential fire alarm control. Also, the installation conformed to the existing Connecticut State fire safety code, which stipulates that there shall be detectors on each level as well as detectors in each of the designated sleeping areas. In the end, due to a number of levels, stairways, hallways, and lofts, A.S.P. installed a total of 12 smoke detectors interconnected to sound whenever any one detector was activated by heat or smoke.

At around 3 a.m. on October 19, 2003, some students who were renting the house woke up to the sound of the fire alarm.

Earlier that night, the students and their guests were enjoying a fire in the fireplace in the first-floor living room, and went to sleep thinking the fire was out. However, due to a breach in the chimney wall, smoke and sparks had infiltrated and a fire began to gain momentum behind the walls.

When the local fire department arrived and opened up the walls, the room exploded in flames. Flames engulfed the bedroom immediately above the living room, turning the bed where two young people had been sleeping a short while earlier into a pile of ashes. Smoke filled the stairwell, remaining bedrooms, hallways, and the access to the attic sleeping loft.

Yet all six tenets and friends were successfully evacuated without injury, and the fire was contained to a relatively small section of the large house.

â€œThe living room with the fireplace and unsound chimney was 80 percent trashed,â€ Spiegel remembers. â€œThe room above, which just had two people sleeping in it, was completely incinerated. Everything in there was black, melted, and gone. The fire worked its way up the wall, and basically came out through that upstairs bedroom. The front stairwell leading up from the living room was blackened as was the top of the stairway. The bedroom next to the one that was incinerated was all blackened and heat-damaged. The smoke detector in there was melted. Fire worked its way down the hallway to a rear addition, and there was less smoke damage as it progressed further down the hall.

â€œThe fire departmentâ€™s quick response kept the fire pretty well contained. The room right next to the living room was virtually untouched, and the kitchen was untouched â€“ you would never know there was a fire in the place. But where people were sleeping â€“ on the upper levels where the smoke funneled up the stairway â€“ they probably would have been in serious trouble. Several of them would have been definitely dead.â€

After the fire, A.S.P. Security Systems was again called in by the same building contractor who said that the homeowners wanted to get the system re-operational. While Spiegel and his team were there chasing out cables that had been melted, removing smoke detectors that had been melted, and breaching circuits through, the students were there cleaning out their personal possessions.

â€œUsually, when dealing with intelligent college kids and most young people, they feel pretty impervious to lifeâ€™s woes and pains. But afterwards, they said to me and my son that the fire alarm saved their lives. They said they couldnâ€™t believe how quickly that fire moved once it came out of the walls. It made very lasting impressions on all of them,â€ Spiegel says.

The homeowners, too, said they canâ€™t speak highly enough about the fire alarm system and how it operated. Any opportunity they have to talk to other people in any capacity, they tell people that they should have a similar system.

The First Line of Defense Award was established to honor this spirit of sharing in the effectiveness of electronic security and life safety systems.

â€œThere are far too many instances where the media dwells on negative aspects of alarm systems: false activation, unnecessary responses, legislation, fines, etc.,â€ Spiegel says. â€œMedia issues usually are more negative, and this is an opportunity to demonstrate that there are positive aspects of these systems. In fact, that is the whole genesis of the First Line of Defense Award. What this award means to me and my company is vindication. A properly installed system can actually save lives. And there is a great deal of professional satisfaction in having worked on a system that did save lives.â€

Sidebar
How You Can Earn the First Line of Defense Award

The First Line of Defense Award, co-sponsored bySDMmagazine and the National Burglar and Fire Alarm Association (NBFAA), was designed to recognize the tangible values and rewards security and fire systems bring to communities and the nation. Established in 1999, this award honors the teamwork among security installing companies, central stations and emergency authorities in protecting their customers and community.

Â· The impact of the event on the companyâ€™s customer, i.e., lives saved or property damage averted

Â· Quality of the applicantâ€™s essay

Â· Press coverage of the event at the time it occurred (local, national or both)

Â· Back-up documentation submitted with the essay, including testimonials from responding police, fire or medical agencies

Winning companies must be NBFAA members. To apply for membership, entrants may visit the NBFAA Web site at http://www.alarm.org, or call (301) 585-1855.

SDM and the NBFAA are now accepting entries for next yearâ€™s First Line of Defense Award. The timeline for entry eligibility is October 30, 2002 to October 30, 2004.