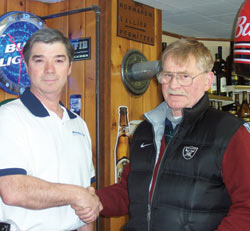 Terry Kelley of Northwest Alarm and Normand Lallier (right).
In an industry where municipal policies of non-response are proliferating nationwide, perhaps the greatest marketing tool is a true success story. The drama of an apprehensionâ€”solid evidence that security systems really workâ€”can go far in promoting the value of both individual security companies and the industry as a whole.

Northwest Alarm came about approximately four years ago and was started in order to fill a specific community need.

â€œIn our area a lot of the smaller alarm companies, including the one that James and I had worked for, were bought out by some of the larger organizations. Originally I stayed with the company that bought us out, and my partner went to work for another firm,â€ Kelley says. â€œAs time went on a lot of our old customers, who knew that I went to the bigger company, would call and say, â€˜Terry, who do I have to kill to get service. Iâ€™m not happy. Iâ€™m not getting what I used to get from the little company.â€™â€

With dogged determination, Kelley and Graham talked about it and decided that there was definitely an unappreciated niche in the market for a local company dedicated to local service. They felt that by creating Northwest Alarm they could fulfill that need.

A local customer in need of such localized service was the Normand W Spirit Shoppe in a quiet, primarily residential area in nearby Winsted, Conn.

Normand Lallier, a repeat customer for Kelley and Graham, had started a small package store and called on Northwest Alarm nearly six months later to install an alarm system.

â€œHe had been in business before and he had had an account with our old company,â€ Kelley says, â€œHe wanted an alarm system but didnâ€™t want to do it when he first started out. He wanted to get some money together first.â€

Catering to the customerâ€™s timetable, budget and specific security needs, Kelley installed what he describes as a â€œminimalâ€ system: two secured doors, one motion detector and exterior siren/strobe.

Only the basics were necessary to catch a perpetrator after an inept smash-and-grab robbery attempt and a dramatic chase.

Last August, alerted by the siren and strobe installed by Northwest Alarm, the Winsted Police Department dispatched officers to the scene of a crime.

There was a break-in at Lallierâ€™s Normand W Spirit Shoppe, where â€œthe perpetrator didnâ€™t physically open the door, but had smashed the glass out of front door, and the interior motion detector picked him up immediately when he came through,â€ Kelley says. â€œThe alarm went off and our central station (Security Central, Wilton, Conn.) immediately received the signal and notified the local authorities, who then dispatched accordingly.â€

Simultaneously, a neighbor heard the external siren going off and also called the police. Two units with a police dog, â€œRocky,â€ responded in approximately less than 8 minutes.

In the meantime, the perpetrator fled the premises of the package store with 13 bottles of hard liquor and 18 packs of cigarettes in a bag.

A neighbor reported seeing the suspect running toward some nearby woods a quarter of a mile away. The Winsted Police pursued the suspect then threatened to release the police K-9 if the suspect continued to resist arrest.

The officers released the dog when the suspect did not respond to their calls. When they heard the dog barking they went into the woods and found the suspect on the ground with the dog over him. Some fifteen seconds after his release, Rocky had cornered the robbery suspect, who compliantly played dead until police arrived and apprehended him.

Moral of the Story Rocky received much of the local press, including his picture in the paper with arresting officers, Mike Roy and Chris Roy.

Northwestern Alarm, however, deserves accolades from their customers and the electronic alarm industry for initiating this dramatic capture and earning the fifth annual SDM/NBFAA First Line of Defense Award.

Success stories, such as that told by Terry Kelly and James Graham of Northwest Alarm & Security, are an essential testament to the inherent and enduring value and integrity of the security industry. 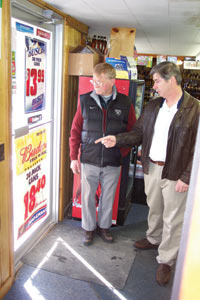 Sidebar: On the Job

Although Northwest Alarm owner, Terry Kelley, described this security system as nothing more than â€œbasic,â€ it satisfied the customerâ€™s needs and earned Northwest the SDM/NBFAA First Line of Defense Award.

Sidebar: How You Can Earn the First Line of Defense Award

The First Line of Defense Award, co-sponsored by SDM magazine and the National Burglar and Fire Alarm Association (NBFAA), was designed to recognize the tangible values and rewards security and fire systems bring to communities and the nation.

Established in 1999, this award honors the teamwork among security installing companies, central stations and emergency authorities in protecting their customers and community.

How to Enter
SDM and the NBFAA are now accepting entries for next yearâ€™s First Line of Defense Award. The timeline for entry eligibility is October 30, 2001 to October 30, 2003.

In its fifth year, the First Line of Defense Award, co-sponsored by SDM and the National Burglar and Fire Alarm Association (NBFAA) continues its mission to recognize and publicize the effectiveness of electronic security and life safety systems. The award honors the dealers, central stations and emergency authorities that have demonstrated outstanding performance in deterring, detecting or preventing crime and/or loss through the effective design, use and response to security and fire alarm systems.