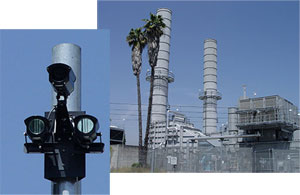 Video surveillance (left photo) is integrated with the access control system protecting Pasadena's Department of Power, including the generator (right).

Like many municipalities, the City of Pasadena, Calif., has placed a high priority on securing its power and water sources since September 11. In 2003, the city's Department of Power enlisted Stewart & Associates of Los Angeles to install an integrated access control, video surveillance and intrusion protection system at its dispatch center - where power sources throughout the city are monitored and decisions about when to activate and shut down substations are made. Since then, the power department has expanded the system to include several of its substations and a new power plant. Additionally, Pasadena's Department of Water has enlisted Stewart & Associates to install an integrated system to secure several reservoirs. Between the two departments, the City of Pasadena now has 128 card readers, 196 video cameras and 52 motion detectors, with plans to add more devices as additional substations and reservoirs are added. Stewart & Associates also is working with Pasadena's Department of Public Works to install a system to protect the Rose Bowl stadium.

"We needed integration between access control and the surveillance system so one would talk to the other," notes David Chau, senior information systems engineer for the City of Pasadena. "If there is an alarm on the access control system or vice versa, it will trigger both systems." If video cameras detect movement or if one of the outdoor motion detectors is tripped, monitoring personnel are alerted and the view from a nearby camera is automatically displayed. By viewing the images, monitoring personnel can quickly determine if the motion was caused by a human intruder or something else, such as a deer. 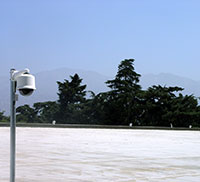 A pan/tilt/zoom camera helps secure one of Pasadena's reservoirs.
Currently, the Department of Power operates two separate monitoring stations - one handling the dispatch center and another handling the other locations. The water department handles its own monitoring. At the heart of all of the systems, however (including those still in the planning phase) is Honeywell Win-pak Pro software. By using a common platform for all of the systems, the city has been able to minimize costs and help ensure that all of the systems operate in the same manner. In the future, security personnel at different departments may be able to back up each other or possibly consolidate operations.

"The City of Pasadena really wanted to have the ability to have a cutting-edge system that could make a seamless transition into future technology and to invest in tried-and-true security products," notes Kathleen Stewart, CEO of Stewart & Associates. Richard Chiang, chief operations officer for Stewart & Associates, adds that one of the nice features of the Win-pak Pro software is that it can monitor a virtually unlimited number of locations.

Having an access control system that requires employees to use their cards to enter and to exit was a critical requirement of the Pasadena project. In the event of an emergency at a power or water plant, the city wanted to be able to quickly determine who was inside, Chau notes. In an emergency situation, the system also can be remotely locked so that no additional personnel can gain access at a location. 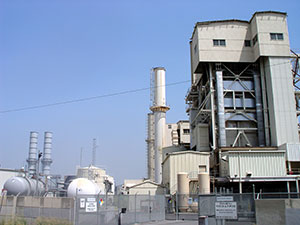 Expansions to the City of Pasadena's access control system have included a new power plant.
A live three-dimensional graphic diagram helps in monitoring the system. "We are able to integrate the access control, video and intrusion system databases into one system," Chiang explains. "We can see any point that is energized or we can track a person walking around." Authorized personnel also can deny an individual access to the system if there is any problem with that individual, Chiang adds.

Since the system was installed, the water department already caught an incident of illegal dumping and was able to use surveillance footage to identify the perpetrator. "When people see the surveillance system, it acts as a deterrent," Chau adds. Another benefit of the new system is that it has minimized the amount of patrols that security personnel have to do and has made patrols more effective.

In addition to adding more locations, the City of Pasadena is looking forward to a software upgrade to the Win-pak Pro system, expected this fall, that will help automate the process of archiving video recordings from the integrated security system. Stewart believes other municipalities could benefit by installing similar systems. "We want to treat Pasadena as a prototype," she says. 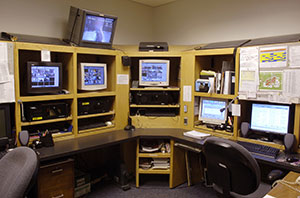 With more than 25,000 students, Johnson County Community College in Overland Park, Kansas, is the largest community college in the state - and it continues to grow even larger. When the college enlisted TED Systems of Merriam, Kansas, in 2000 to upgrade its existing access control system, that system controlled 10 or 12 buildings. Since then, several more buildings have been constructed, and the system now covers 17 separate locations, with two more under construction. The total number of readers has increased from about 150 to more than 500, with plans for 160 more.

The college undertook the initial upgrade in 2000 because its previous system was unreliable. "We had a lot of complaints and problems with the wiring," notes Gus Ramirez, director of public safety for Johnson County Community College. "TED completely rewired the whole operation and made it very professional."

The system is now connected through an Internet protocol (IP) network running on a fiber optic network, which TED installed. The new network, notes TED general manager Herb Farnsworth, "lets you get from place to place without having to worry about the length of the communications channel." Farnsworth adds that by relying completely on fiber, rather than a mixture of copper and fiber as with the previous system, the system minimizes potential problems with lightning. "Copper can be a great big lightning antenna," explains Farnsworth, adding that the Kansas plain is particularly vulnerable to lightning strikes.

In the upgrade in 2000, TED replaced the previous card readers, which required users to swipe their cards, with new proximity card readers from HID Corp. The 3,000 faculty and staff members who use the cards have found the new system much easier to use, notes Jan Porter, access control coordinator for the college. "The card can stay in their wallet or purse and they just have to hold it up," Porter says.

TED didn't see a need to change the college's existing PCSC control system, however. "We convinced them the system was good and if the applications and training were cleaned up, the system would support the campus and its growth plans quite well," Farnsworth says. "The real value of the software is it's very powerful and they already knew how to use it. It's intuitive but powerful and allows you to do some unique things with logic statements and counters." 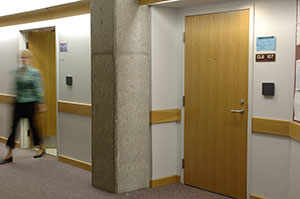 Instructors use the access control system instead of keys to lock and unlock classrooms.
As an example of how the college is using these unique capabilities, Porter points to the system's "flip out" feature. "The door is locked until the first person comes in to unlock it," Porter notes. "When class is over, you have the ability to lock it and then the next instructor locks and unlocks it. We put the burden on the instructors to open and secure the classroom. They use the system just like a key."

Another unique and powerful capability of the PCSC system is door monitoring, which will alert campus public safety personnel if a door that is supposed to be secured is opened - or an entry/exit door is left open for too long. The system uses a graphical display to show the exact location of the problem so public safety personnel will be able to quickly and easily determine where to go to investigate.

Despite the large scale of the access control system at Johnson County Community College, Farnsworth says the system does not experience operational delays. He attributes that to the system's distributed design. Each of its 50 control panels stores credentials locally and can make independent decisions. "It enables you to have a large system, but to execute very fast," Farnsworth says.

"A contractor must have a clear understanding of the client's goals and objectives in order to achieve their desired results," Porter says. "Jeff Pirner, the project manager for TED Systems, has taken the time to understand what our goals and objectives are at the college. This knowledge, plus TED Systems' loyal and dedicated staff with high standards and quality workmanship, has provided Johnson County Community College with an excellent security system which meets the needs of the college today and for the future." 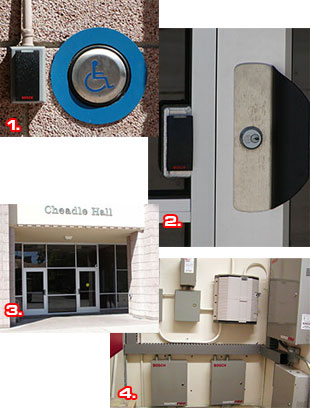 1.) Specialized readers help ensure that disabled people can enter facilities at the University of California at Santa Barbara (UCSB).

Another educational institution that has begun to implement access control on a large scale is the University of California at Santa Barbara. At press time, UCSB's physical facilities department had already installed 53 card readers in 10 buildings and was about to add 100 more card readers. "Every outside door on campus is our goal," says Tom Boren, principal electronic technician for the university, who anticipates that the project will span several years.

The university made the decision to install the access control system to eliminate security issues involved with issuing keys. "A lot of keys had been issued and some people don't return them or they got lost," explains Boren, noting that the university covers 990 acres and is home to 23,000 students. "It got to the point where we needed to do something major to increase the security around here." During regular business hours, some outside doors are unlocked, but at other times, an access card is required for entry. About 2,000 people currently have access cards, but that number eventually will increase to tens of thousands. "The automatic system to lock and unlock doors will be a cost savings," Boren says. "Having custodians walk around locking and unlocking doors is labor-intensive."

The new access control system is based on the Readykey Pro system from Bosch Security Systems. The university also uses Bosch digital video recorders and intrusion detection panels. Although access control, intrusion and video surveillance currently operate as three separate systems, decision-makers wanted the ability to easily integrate the systems in the future. For example, Boren says he would like to have the ability to trigger an alert and automatically display camera images if someone presents the wrong credential. Another key requirement was for the system to support IP connectivity. "Hardwiring would be out of the question," Boren says.

An important consideration in choosing Bosch Security Systems' products was that the company provides excellent customer support, Boren says. Additionally, physical facilities personnel were able to get training from the manufacturer so that they can do their own installation - although some individual departments are funding their own access control installations and have the option of contracting an outside firm to handle installation. The university's physical facilities department is not responsible for student housing. However, the administrators who handle those buildings also have made the decision to begin installing access control based on Bosch equipment.