The security industry's largest systems integrators have effectively adapted to the certainty of an uncertain economy and overcome ambiguity with nimble business strategies.

This is evidenced by SDM's 9th annual Top Systems Integrators Reportâ€“a ranking by revenue of the largest firms that contract electronic security projects for commercial, industrial, institutional, government, and other markets.

The data reveal evidence of more streamlined business operations in 2003.

Undoubtedly the result of the struggling economy, the total number of full-time employees was down significantly, as was the cumulative number of business locations. Yet collective gross revenue continued to climb. This strongly suggests that integrators have pared down their operations and are getting more for less.

While the number of employees and business locations fell, the number of new systems jumped dramatically, from more than 28,000 last year to more than 52,000 this year. One factor contributing to this growth is the increased number of companies reporting new system starts compared with previous years. However, this factor alone does not account for the striking 86 percent growth rate in new systems.

As expected, integratorsâ€™ strengths continued to come from the staples of electronic security: access control and video surveillance. 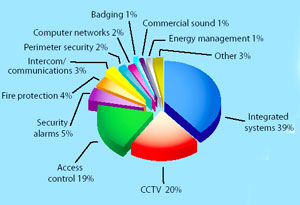 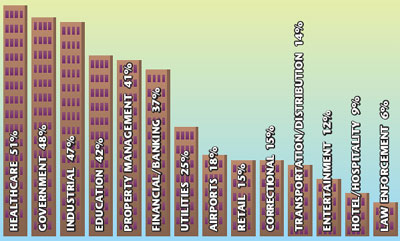 Integrators were asked to segment their revenue streams by vertical market. For a majority of Top Systems Integrators, the healthcare market presented the greatest opportunity. Other active markets include government, industrial, education, and property management. The following are percentages of integrators that confirmed a particular market as a significant source of 2003 revenue: 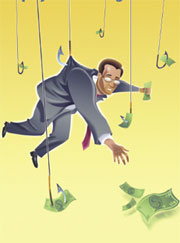 Although the ranked firms reportedly employ more than 72,000 full-time workers, (compared with 175,910 reported one year ago), no employee data was provided by Siemens or SimplexGrinnell, which accounted for almost 18,000 employees in last yearâ€™s report. Even so, it appears that the Top Systems Integrators have collectively pared down the workforce over the past year.

Tracking the Top Systems Integrators from year to year reveals less than 21 percent growth from last year, which is the second lowest growth rate over the last five years (second to 1999-2000, which measured just over 12 percent). This yearâ€™s growth rate is only about half of last yearâ€™s 41 percent growth rate, from $2.4 billion in 2001 to 3.4 billion in 2002. Still, 21 percent annual growth is phenomenal in any industry, and reflects the continuing boom in systems integration.

More From the Report

Would you like more information about each of the 100 firms ranked here?

SDM â€˜s Top Systems Integrators Report and Database is a useful marketing tool for companies with products and services targeted to systems integrators.

Making the Most of the Rankings

SDMâ€™s Top Systems Integrators Report includes 100 firms ranked in order of their 2003 total annual revenue (rounded to the nearest hundred-thousand), beginning on p. 40. The table includes selected information about each firm, gathered through an annual survey. Each entry includes: