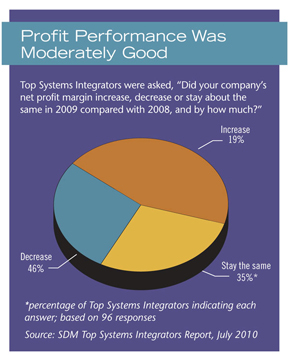 In the security systems integration business, fewer than 20 firms operate globally or nationally. The majority of integrators are regional and local businesses, which depend on construction and spending in a defined geographic area. This fact has a profound impact on how the Top Systems Integrators performed in 2009 â€” one school district, a single medical center or one corporate office building could make or break an integrator’s sales goals for the year.

If your sales and profits were better-than-expected in 2009, you were not alone.

According to first-time ranked CONTAVA Inc., based in Edmonton, Alberta, there was “strong market demand year-over-year due to increased interest from the energy, utility, government, health and academic sectors.”
If your sales and profits were worse-than-expected in 2009, you also were not alone.
Intertech Security LLC, based in Pittsburgh and ranked No. 29, reported that the market “weakened as the year went on. All segments slowed their decision-making process or postponed projects.”
The most common scenario among systems integrators was a year of quarter-by-quarter ups and downs.
“We saw a net drop in revenues of approximately 20 percent,” reported No. 73, Universal Security Systems Inc., Hauppauge, N.Y. “The private commercial/corporate segment was the weakest, with revenues off by over 50 percent. The public/government sector was strongest, with revenues up by 50 percent. Together this still resulted in an overall downturn. Many projects were postponed or canceled.”

Postponed spending by clients was a common theme last year, as integrators struggled with the unbalanced situation of too many quotes/bids and not enough signed contracts.
The greatest theme that emerged in 2009 was one of “fierce” competition, embodied by too much supply and not enough demand â€” something that integrators hope to shake off in the coming months. Only one in five integrators expects to have improved revenues in 2010.
“The available projects were fewer and harder to win. The number of respondents to open market bids was more than triple the averages of prior years,” reported No. 11, ASG Security, Beltsville, Md.
Operational Security Systems, Atlanta, ranked No. 61, summed up the year in just four words: “Weak economy, intense competition.”
By year end, total annual revenue of the largest systems integrators ranked on SDM’s 2010 Top Systems Integrators Report, grew 2 percent to reach $8.05 billion. This is a comparison between the top 100 companies ranked in 2009 and the top 100 ranked in 2010. However, SDM chose to begin expanding the Top Systems Integrators Report beyond the first 100 firms, and this year there are 107 companies ranked. This represents a 3 percent growth rate and $8.08 billion in annual revenue.
Fourteen systems integrators are ranked for the first time; however, some from among last year’s top 50 did not report this year, including: Kratos Defense & Security Systems Inc., Surveillance Systems Integration (SSI), Energy Control Inc., and Idesco Corp.
Systems integrators started approximately 71,000 projects. This increase of nearly 18,000 projects is largely the result of first-time reporting by Siemens of 8,400 projects and Ingersoll Rand Security Technologies of 2,980 projects; as well as significant increases in the number of project starts by Johnson Controls, Convergint Technologies, ASG Security, and Tri-Signal Integration.
SDM’s Top Systems Integrators Report ranks, by revenue, the largest firms that contract electronic security projects. 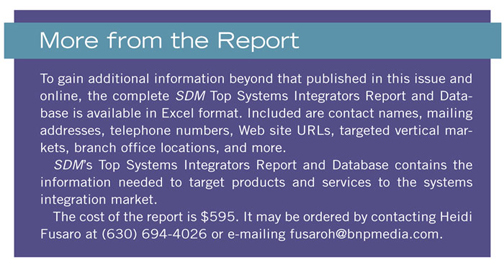