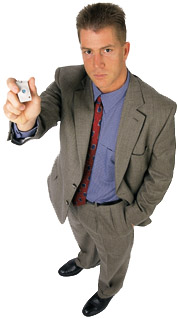 Network Alarm president Mike Nelson displays a panic device identical to that which was used to foil a would-be thief.
In an industry where word of mouth travels fast, the greatest marketing tool is a true success story. The drama of an apprehensionâ€”solid evidence that security systems really workâ€”can go far in promoting the value of both individual security companies and the industry as a whole.

Such is the philosophy behind the First Line of Defense Award, sponsored by SDM and the National Burglar and Fire Alarm Association (NBFAA). In its second year, the First Line of Defense Award continues its mission to recognize and publicize the effectiveness of electronic security and life safety systems. The award honors the dealers, central stations and emergency authorities that have demonstrated outstanding performance in deterring, detecting or preventing crime and/or loss through the effective design, use and response to security and fire alarm systems.

Top honors in the 2000 First Line of Defense Award go to Network Alarm, Norman, Okla. In a retail application, the company installed a Napco burglar alarm complete with a Visonic handheld panic device, preventing injury during a late-night armed robbery and leading to the suspectâ€™s arrest.

The site of the attempted robbery was Priscillaâ€™s in Tulsa, Okla., one of 10 stores in a chain that Network Alarm has protected since its opening in March 1996. According to Mike Nelson, president of Network Alarm, each storeâ€™s system employs full perimeter and interior space protection, including CCTV, and a hold-up alarm, which consists of stationary and handheld panic alarms. It was one such remote panic device that saved the employee on dutyâ€”and the storeâ€”from becoming the victim of an armed robbery.

Ironically, the handheld panic button was not part of the original security system at Priscillaâ€™s. â€œIt was [added] very quickly after the initial installation, within a year of opening,â€ says store owner Robert Floyd. â€œThe way we run our stores, much of the day thereâ€™s only one employee, so the employee is out on the floor cleaning, stocking shelves, things like that. We felt it was important for [employees] to have the security to know that if something did happen, they didnâ€™t have to run somewhere. They could immediately press a button and know that aid would be on the way.â€ Floydâ€™s foresight would pay off on the night of March 1, 1999. It was about an hour before the storeâ€™s midnight closing time when the single clerk on duty noticed a suspicious-looking shopper.

â€œWhen youâ€™re working in a store you learn ... how to watch people, and you have a gut feeling, and you know when the wrong thing is happening,â€ Floyd says. â€œOur clerk that night could tell this person was not there to be a customer. He could tell the person had a gun.â€ 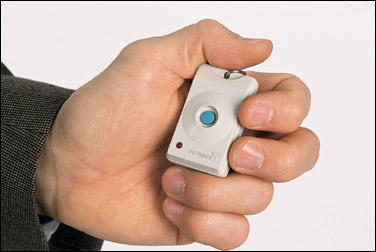 A handheld panic device, the Visonic WT201, allowed the employee on duty during the holdup at Priscilla’s to quickly summon police—without alerting the thief.
At Network Alarm, central station manager Nancy Elam was on duty when operator Kathryn Allen received the panic alarm signal. According to Elam, such alarms are not uncommon at the central station, which receives several panic alarm calls per eight-hour shift. While many are false alarms, the employees dispatched police immediately without calling the store, following the procedure for panic signals.

â€œIt was a little bit unusual, because they have had a lot of robbery (attempts),â€ Elam says. â€œWe knew it was more likely to be real.â€

The Tulsa Police Department responded swiftly, arriving at the store to apprehend the suspect before he even had the chance to attempt escape. Once the central station received word that the suspect was in custody, Elam phoned Floyd to inform him of the close call.

â€œThe alarm was great,â€ Floyd says, adding that he would definitely recommend such a system for other retail applications. â€œWeâ€™ve been [with Network Alarm] for a long, long time. They do all our work in all our stores, and I have their system in my home.â€

â€œThe technicians who installed the systems and our central station personnel can see that what we do really helps people,â€ he says. â€œIt also helps our overall customer base and our main objective, which is their peace of mind. They can feel better about their decision to secure their home or business, because they can see the results.â€ Floyd credits the security system for serving its purpose in the robbery, but cites Network Alarmâ€™s overall performance as an integral factor in its success.

â€œWeâ€™re really happy with how they handle our business, and we donâ€™t have any problems with them,â€ he says. â€œAt one time I was with a different company and had nothing but problems The security system is a good system, but the bottom line is, the company that services the system is probably more important than the system itself.

A security industry veteran, Network Alarm, Norman, Okla., has been a member of the alarm community since 1972. The company, which currently employs 37, operated for 23 years under the name T Security, becoming Network Alarm in 1995. Company president Mike Nelson has been on board for five years. He describes Network Alarm as a â€œthoroughly variedâ€ company that installs residential burglary, fire, panic, medical alarms and CCTV, plus commercial burglary, fire, holdup, access control and CCTV. The company currently serves about 3,500 accounts. â€œWeâ€™re in an expansion phase,â€ Nelson says, describing the companyâ€™s current growth objective. Another goal, he says, is to expand the types of markets in which Network Alarm is involved. â€œRight now the biggest part of our growth comes from the new construction residential market,â€ he says. â€œWe would like, in addition to keeping our market share, to expand more into the large commercial sector.â€ With these goals in mind and the 2000 First Line of Defense Award under its belt, Network Alarm plans to continue its long tradition of service into the 21st Century.