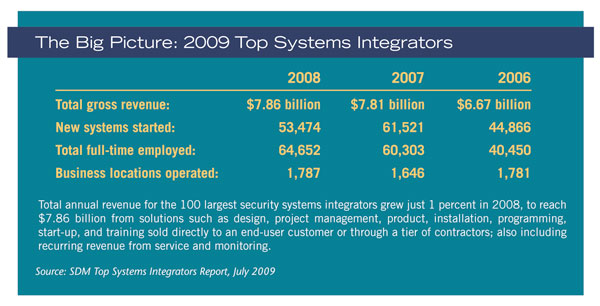 The big splash security systems integrators made in the market during the first three quarters of 2008 was tempered by a fourth quarter that looked more like a quiet ripple in the water. Some firms, which admitted they had been on target for 10 percent or higher growth – had the latter part of the year held up like the first part – ended the year by finishing just about even with 2007, or maybe slightly above. 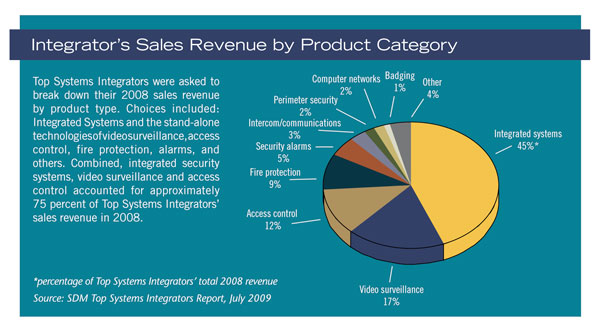 “Overall, the market for integrated security systems sales was somewhat weaker in 2008 compared to 2007, reflecting the slowdown in the U.S. economy. Comparatively, even though this market suffered less than most, it was impacted by the recession, especially as new construction projects slowed down,” reported Diebold Inc., ranked No. 4. “The most qualified business opportunities were found within the government, homeland security, healthcare, education and large commercial segments.”

SDM’s Top Systems Integrators Report ranks, by revenue, the largest firms that contract electronic security projects for commercial, industrial, institutional, government, and other non-residential markets. For ranking purposes, these are businesses that derive more than half of their revenue from the sale, design/engineering, installation and service of multi-technology electronic security systems, such as access control and identification, video surveillance, alarms, perimeter security, and other network-based technologies. 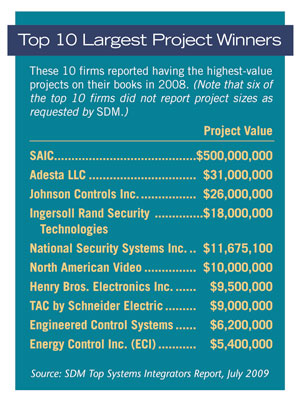 “Most of our enterprise customers had a budget in 2007, and they were able to spend the money to meet the overall objectives of the security department. By contrast, 2008 was much more difficult for integrated security system sales. Money didn’t flow like it did in 2007 for us,” reported No. 99 ranked Enterprise Security of Anaheim, Calif.

This year’s report marks a shake-up among the 10 top integrators ranked, with ADT taking over the No. 1 spot for the first time, based on SDM’s estimates of $1.5 billion, and Siemens moving down to No. 2 based on reporting of $1.4 billion in 2008. Also, readers will note that technology solutions giant SAIC (Science Applications International Corp.), San Diego, a Fortune 500 firm, is ranked for the first time on the report – in the No. 6 spot with $200 million in security systems integration revenue.

Among the top 10 ranked firms, only two reported decreased results for 2008. Among all 100 integrators, 37 percent experienced negative results, but 56 percent had higher year-over-year results, and 7 percent were even with 2007.

The government and healthcare markets, as well as education, were commonly cited by integrators as being their best sources of new and continuing business. So while there are opportunities, the economy will again have an impact – as we are well into 2009 and several integrators suggested that they will report little or no growth this year. On a positive note, there remains heightened interest and a strong need, best expressed by No. 89, SiteSecure Inc. of Sanford, Fla.

“It appears that there is aging security infrastructure that is budgeted for replacement with IP-based solutions.”

Some industries in this recession have been forced to simply go with the flow of the economy. Security systems integrators made small gains in 2008 and helped keep interest in security solutions heightened.