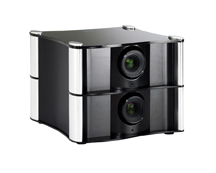 Runco®, a provider of luxury display solutions, announced the introduction of its new Quantum Q-1500d lampless LED home theater projector. The Q-1500d was designed to combine the technology and benefits of the QuantumColor Series with powerhouse performance that yields an incredibly bright image ideal for larger screen sizes. The company describes the Q-1500d as “the brightest LED home theater projector available on the market,” which maximizes the benefits of Runco’s InfiniLight™ lampless LED illumination technology, and pairs it with the QuantumColor’s revolutionary technological advancements such as Runco SmartColor™, InstantOn™, and an energy-efficient system.

The Runco Q-1500d offers homeowners with larger theaters and screens (up to 200 inches) the ability to enjoy the benefits of an LED projector with the performance of the QuantumColor Series.


According to Runco, the Q-lumens in the QuantumColor projectors are perceived as brighter than lamp-derived lum ens, but that is not the only brightness advantage of the QuantumColor platform. The aging curve on the InfiniLight LED illumination system is much more stable than that of a traditional UHP mercury lamp, which loses significant brightness in its early hours of operation, falling to a plateau and then aging gradually to half-life, burn out, and replacement: starting the cycle over again. In contrast, Runco’s lampless InfiniLight system is calibrated at every start-up and has a more gentile brightness loss curvature. This means the perceived brightness-advantage of Q-lumens is even more pronounced after 1,000 to 2,000 hours of ordinary use.


Another Runco QuantumColor benefit is InstantOn™, which provides a nearly immediate projected image when turned on. InstantOn saves the homeowner both time and money, as the projector no longer needs to be left in standby mode, which consumes exorbitant power when the projector is not in use.


The Q-1500d offers two lens options to accommodate nearly every theater and various screen sizes. For the ultimate in viewing flexibility and enjoyment, each model is available with Runco’s exclusive, award-winning CineWide and CineWide with AutoScope™ technology. These technologies reproduce 2.35:1 CinemaScope™ movies with unparalleled accuracy and full vertical screen image height and eliminate useless black bars.

Tapping Into the Revenue of Home Theater Projects