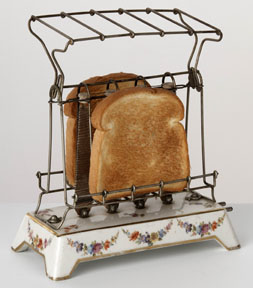 PHOTO COURTESY OF THE GRAIN FOODS FOUNDATION
Toast, anyone? While home electricity first handled lights, it also, believe it or not, also handled the making of toast as early as 1909, when the first U.S. patent for an electric toaster was made by General Electric for an appliance surrounded by a wire cage to hold the bread. The model, the D-12, is considered the first commercially successful toaster in U.S. history. Today home electricity handles much more than toasters, as today’s IEEE 1901 standard brings powerline communications to home broadband applications. With the recent ratification of the IEEE 1901 standard, technology and product providers are taking another look at powerline communication (PLC) for home applications, and electronic system contractors can expect a new wave of smart appliances that could talk over powerline communications.

Of course, PLC has a rather long home history, thanks in large part to X10, which was invented in the late 1970s by British-based PICO Electronics, whose engineers relocated to the United States to concentrate on remote control of record players using existing powerlines. After nine unsuccessful experiments, the story goes, the tenth one was the charm. X10 USA and a new way to view home automation was born.


Its signaling method opened up the ability to remotely control almost anything plugged into the powerline without adding any other control wiring. For X10 PLCs and some other designs, devices such as passive couplers, coupler repeaters, surge protectors, noise filters and signal blocks are installed in or near the electrical service panel. These are required for consistent and reliable whole house signaling performance.


In what some industry players call a next step in the maturing of PLC, IEEE 1901 or broadband over powerline (BPL) introduces a new standard for secure, high-speed communications via electric powerlines. It defines data distribution among all classes of BPL devices â€” for the smart grid, first-mile/last-mile service connections, in-building home area networks, vehicle platforms and other security-sensitive applications. Driven by the requirements of diverse end users, the standard ensures efficient use of the powerline communications channel, defines coexistence and interoperability among multi-vendor devices, delivers sufficient bandwidth and supports so-called quality of service.

There are kits such as this one that offers 4-port powerline networking for turning electrical power outlets into high-speed Internet and home network connections. Photo courtesy of Netgear Inc.

BPL, also known as powerline Internet or powerband, is the use of PLC technology to provide broadband Internet access through ordinary power lines. A computer (or any other device) would need only to plug a BPL "modem" into any outlet in an equipped building to have high-speed Internet access.
A stamp of approval by IEEE, the world’s largest professional association dedicated to advancing technological innovation, can make a big difference.

"The broad market acceptance of networking technologies such as Ethernet, Wi-Fi and Bluetooth is in great part due to the IEEE worldwide standards that help define product interoperability and performance thresholds for them," says Rob Ranck, president of the HomePlug Powerline Alliance. "Having this IEEE powerline networking standard provides a stable foundation that will help the industry to accelerate mainstream adoption for broadband networking.”


The alliance is an industry group promoting adoption of powerline home networking products. IEEE 1901 incorporates its HomePlug AV Medium Access Control (MAC) and Physical (PHY) layers as a baseline. "The 1901 standard is designed to accommodate a wide range of major applications for PLC, including in-home broadband networks for data, audio and video distribution,” says Jean-Philippe Faure, chair of the IEEE 1901 working group.


Ken Erdmann of Erdmann Electric, Springville, Utah, and CEDIA’s immediate past chairman, has a family business going back to 1916. “I remember when there were limitations to powerline communications. Electrical noise issues, limitations due to the size of the home. In the process of defining the standard, the technology and its applications improve,” he says.


Now, he adds, powerline for computer networking has good success as well as the moving of flat panel TVs to Web-enabled TVs. “You can use powerline without tearing up a home” when there is no way to run a wire and wireless may prove too bulky, Erdmann says. Erdmann also points out that no one means of communications dominates in the home these days. “You have to look at the choices. Each of the technologies has some benefits and advantages. Look at the infrastructure before picking coax, Cat 5, powerline or wireless. Basically, customers do not care what is going on behind the curtain, just that things work right,” Erdmann says.


While PLC aims at broadband data, audio, video, lighting and window curtain controls, it also seems that an emerging target is smart grid applications to and from homes as well as inside the home.


For example, the Wi-Fi Alliance and the HomePlug Powerline Alliance recently entered into a liaison agreement to facilitate and promote the adoption of their tech approaches for the smart grid. Adds Ranck, "HomePlug and Wi-Fi devices represent a large share of installed nodes worldwide, and ensuring seamless interoperability is critical for broad scale smart grid deployment." Firms ranging from Alarm.com and ADT Pulse to Xfinity Home Security are promoting home energy management as a complement to monitored home security.


Still, 1901 PLC has the juice on the home entertainment side, too. HomePlug recently demonstrated carrier-grade powerline nets to carry HDTV throughout a home at the 2010 Broadband World Forum in Paris.


The 1901 standard comes with a warning, however, since it includes two different PHY layers: one based on OFDM modulation and another based on Wavelet modulation. Each PHY is optional, and implementers of the specification may, but are not required to, include both. Devices that use the OFDM PHY only would not interoperate with devices based on Wavelet PHY. Orthogonal frequency-division multiplexing (OFDM) is a frequency-division multiplexing scheme used as a digital multi-carrier modulation method for wideband digital communication, whether wireless or over copper wires, in applications such as digital television and audio broadcasting, wireless networking and broadband Internet access. Wavelet modulation, also known as fractal modulation, is a technique that makes use of wavelet transformations to represent the data being transmitted. One of the objectives of this type of modulation is to send data at multiple rates. If the channel is not clear for one specific bit rate, meaning that the signal will not be received, the signal can be sent at a different bit rate where the signal to noise ratio is higher.