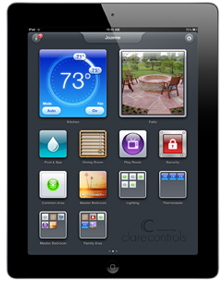 Clare Controls, Sarasota, Fla., a provider of configurable and intuitive automated systems for residential and commercial applications, announced the upcoming debut of its new ClareHome App for iPad® and iPhone®.  By replacing the room navigation metaphor commonly pre-configured by the dealer, the ClareHome App allows users to organize their home automation tasks using a familiar dashboard concept.  With the new App, users may build personal interfaces based on their favorite things to do — not just the rooms they’re in.

“ClareHome was designed to meet two very specific goals: to maximize dealer efficiency and to empower users,” explained Clare Controls Chief Executive Officer Brett Price. “The new ClareHome App makes significant progress in both objectives. Dealers will continue to configure and deploy their projects using Clare Control’s unique cloud-based Fusion Configuration Tool.  Now, by transitioning design of the user experience to the user through familiar metaphors, the configuration time is dramatically reduced. And users will be delighted with its personalized functionality.  Simply put,” he concluded, “no other home automation product puts as much control over the interface in the users’ hands.”

Control Spaces can be unique for every user. Updates to a user’s space propagate to every iPad or iPhone instantly — keeping all Control Spaces in perfect synch. Users may also create unique interfaces based on device type — iPhone oriPad.

Clare Controls will debut the ClareHome App in booth 3150 at the CEDIA Expo, Sept. 6-8, in Indianapolis.  First shipments to dealers are scheduled for Q4, 2012.