Have You Graduated To Addressable?

2.         What is the maximum number of water flow switches permitted to be connected to a single initiating device circuit?

3.         What is the maximum number of water flow switches permitted to be connected to a single initiating device circuit when the system is an addressable system?

4.         What is the maximum number of supervisory devices permitted to be connected to a single initiating device circuit?

5.         Fire alarm systems installed in new one- and two-family dwellings must be addressable.

6.         According to chapter 18 of NFPA 72, all fire alarms installed in a new educational facility must be of an addressable type.

7.         When installing an addressable system in a school the entire system must incorporate circuit integrity wiring.

8.         Addressable fire alarm systems get their name from the numbering scheme established by the manufacturer known as the MAC address.

9.         A fire alarm system component with discrete identification that can have its status individually identified or that is used to individually control other functions is known as

c.          alert the teachers and to have the children stay in their seats since there could be smoke in the hallway.

d.         suppress the fire until trained personnel arrive to extinguish the blaze.

12.       When a fire alarm signal is deactivated (silenced), the system is required to reactivate the notification appliances upon the subsequent activation of addressable devices.

13.       One benefit of an addressable system is the ability to program cross zoning without having to run multiple wires and utilize the limited number of zones typically found in a conventional fire alarm system.

14.       A sprinkler system in an educational facility is required to activate the building fire alarm system. 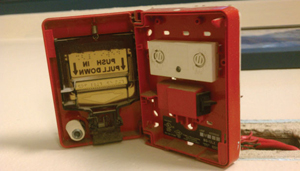 A technician was assigned to do a fire inspection. It was a location he had been to several times in the past. He knew it was an addressable fire alarm system and he had tested each device and reported everything worked. However, when the technician was testing the pull station the system went into trouble. He opened the pull station to visually inspect. Everything seemed appropriate. Can you figure out his next step?  And can you identify what was wrong with the device? 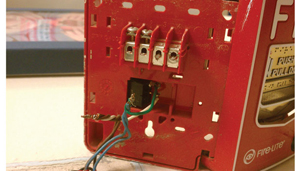 Answer to: What’s Wrong With This?

The technician removed the pull station from the wall to examine the wiring. The device went bad and someone removed it, and because the previous technician didn’t have a replacement device he altered the wiring so that the system appeared normal. In addition to impairing the system operation, the previous technician could be held criminally liable for such action. The technician replaced the device and reprogrammed the panel, adding the device address back in to the control.