Since the invention of the electric bell ringer in 1831, Americans have relished the benefits of the ever-present doorbell to let them know someone's calling. A new nationwide survey shows that no matter how long we have doorbells as fixtures on front doors, we still have very strong and personal reactions to hearing them ring.

The 2,000-person survey was conducted by an independent market research firm and sponsored byVTech® Communications Inc. a wholly owned subsidiary of VTech Holdings Ltd. VTech has advanced the doorbell to the digital generation with a new line of video doorbell phone systems that give Americans the "X-ray" vision they want when the doorbell rings by conveniently using their home phones.

Beyond turning into a superhero to see who's there (30 percent want X-ray vision), survey respondents said that an intercom to engage with the visitor (22 percent), followed by the immediate desire to continue activities unnoticed (16 percent), were their top spontaneous reactions to hearing the bell.

A Relentless Need-to-Know
No doubt, maintaining a sense of security is a top reason nearly all consumers (95 percent) say they won't open the door before checking who is there. The majority (89 percent) said they sometimes hesitate to open the door when the bell rings, especially late at night (57 percent), when there's an unfamiliar face (42 percent) or when home alone (31 percent).

Other fun facts from the VTech/Toluna survey show:

Mars and Venus reactions to a ringing doorbell. Women are more concerned about security than men — 60 percent of women check who is at the door due to safety worries compared to 45 percent of men. Men, instead, were more apt than women to peek out of curiosity or to screen visitors.

Pets are the secret weapon for home security. The majority of consumers (69 percent) take some measure to protect their homes with 43 percent hoping the family dog will warn them of any trouble. Nearly one third (31 percent) use alarm systems and almost a quarter use motion-detecting lights (23 percent).

“In our work with the new VTech video doorbell system, we wanted to find out what Americans think about their doorbells and if this fixture on the front porch is still something people feel attached to,” said Matt Ramage, senior vice president, product management, VTech Communications. “We saw that knowing who's at the door still provides a sense of comfort and security — while satisfying an equal desire for curiosity and convenience. As Americans embrace more digital solutions in the home, we can now take the doorbell concept a step further to accommodate all of those needs.” 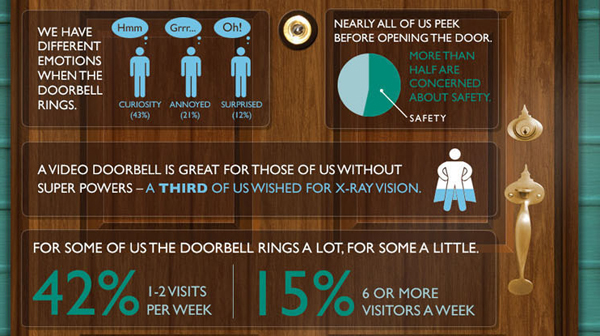