By Marty Minchin
An expert on drones and law enforcement recently spoke at the first drone Summit hosted by Security 101 – Charlotte, which drew 100 people representing a variety of industries.
Security 101, which specializes in commercial security, hosted the summit because company leaders felt there was an immediate need to educate the Charlotte market about evolving security solutions as drone threats become more prevalent, said Scott Robitzer, Security 101 – Charlotte partner and president of sales.
“We hoped that every person that attended would leave with more knowledge of drones and the threat of drones than they walked in with,” Robitzer said.
The summit was held at the Charlotte Knights baseball stadium, where Security 101 provides security.
Don Roby, the featured speaker, is the training program manager for the Airborne Law Enforcement Association. Prior to becoming an international speaker about drones, he worked for the Baltimore County Police Department for 35 years.
Security 101’s Drone Summit was the first time a private security firm had reached out to Roby to speak.
Roby said that drones were a hot topic that were “consuming everything we do in aviation right now.” A growing number of law enforcement agencies are using drones for everything from crime scene photography to assisting officers with situational awareness, although their high cost and short flight time and distance can be limiting, he said.
He detailed different types of drones, going over popular hobbyist and law enforcement crafts as well as much more expensive models with greater flight time and distance capabilities.
More industries are embracing drones, including agriculture, construction and real estate, Roby said. Their wide range of uses includes search and rescue, crowd management, aerial photography and building checks.
For individuals and businesses interested in flying drones, Roby recommended thoroughly researching rules and regulations and acquiring proper pilot training. Users should make sure that a drone is viable for its intended use and choose an appropriate unmanned aircraft system (UAS), he said.
Groups using drones also should stay current on issues of privacy and data retention, which are still being developed, Roby said. “Whatever you do, follow the rules.”
Robitzer said that people who attended the summit received “a wealth of knowledge along with being in a great atmosphere with industry peers.”
The summit, which included lunch and time for networking, also hosted company booths representing businesses and agencies such as Axis Communication, Hitachi Data Systems, Genetec and Wesco. Charlotte UAV’s booth included a display of several types of drones.
Attendees represented companies and groups including the Carolina Panthers, Duke Energy, Charlotte Douglas International Airport, LPL Financial, Nightingale Intelligent Systems and UNC Charlotte.
Robitzer said that Security 101 plans to host an ongoing series of summits covering different topics. The main goal of the first summit was to shed light on security concerns from within the security community and teach attendees about drone uses, rules and regulations.
“Regardless of the topic, Security 101 feels that there is a need to educate our customers and [the] security community on various topics to make them more efficient and powerful within their daily responsibilities,” Robitzer said.
By Marty Minchin
SIDEBAR 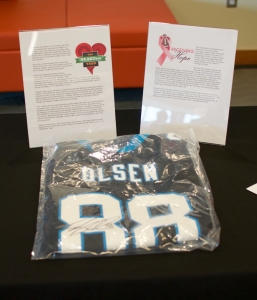