Dealers share a few challenges they’ve faced installing and servicing commercial alarms this year, and how they overcame them.

Anyone designing, installing and servicing commercial alarms knows there is no such thing as a one-size-fits-all solution. From historic buildings to multi-tenant buildings to a neighborhood accounting firm, security dealers encounter unique challenges every day.

SDM asked some dealers to share their biggest challenges of 2017 and how they overcame them. Here is a small sampling of the everyday innovation those in the security industry employ on a regular basis. 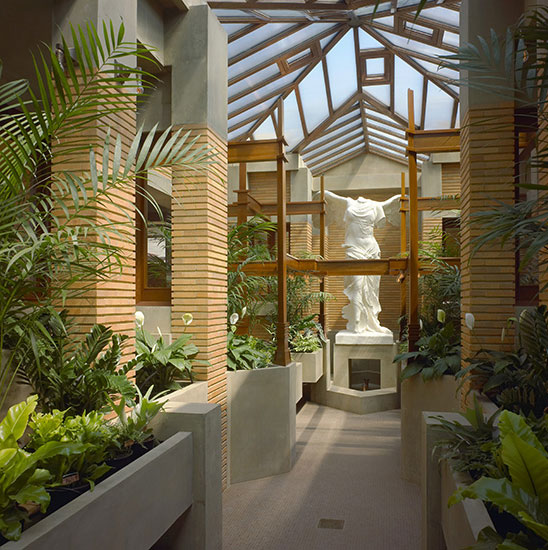 John Sperrazza, president, Advanced Alarm Inc., Tonawanda, N.Y., says one of the most interesting and challenging installations his team at Advanced Alarm had this year was the Darwin Martin House, a residential complex built by iconic American architect Frank Lloyd Wright.

“The site included 30,000 square-feet of historic architecture, original furniture and artwork, and 394 art glass windows,” he says. “The aesthetic integrity was paramount to a successful installation — hidden cameras, wires and systems were crucial.”

Aside from the aesthetics, the building was being managed by three separate alarm companies, which made it difficult for the staff to keep up with the high number of false alarms, Sperrazza says. “Advanced Alarm stepped in to update the various systems one by one to ensure they were approved by the conservation group’s architects, and could be integrated into one effective, continuous and consistent system.” 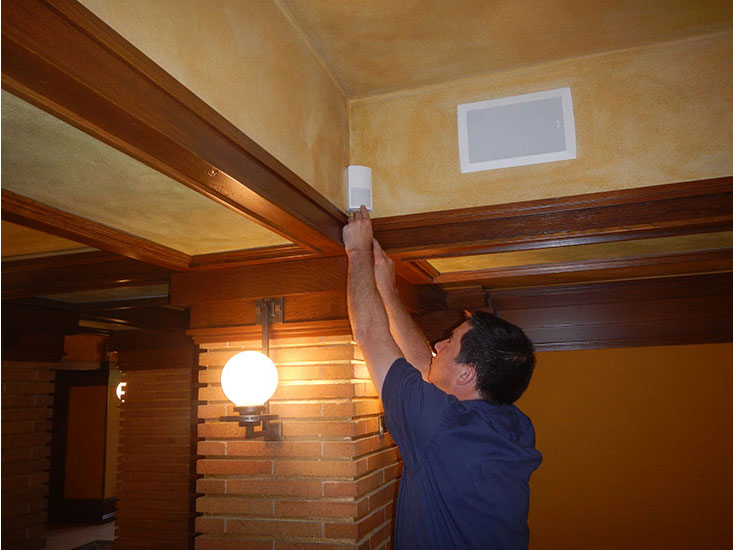 Advanced Alarm, Tonawanda, N.Y., used wireless sensors from Honeywell that allowed them to avoid extensive drilling and cabling, and gave them the option for recess-mounting at the Darwin Martin House. Photo courtesy of Advanced Alarm

To overcome the challenge of seamless aesthetics, Sperrazza’s team looked to wireless sensors from Honeywell that allowed them to avoid extensive drilling and cabling, and gave them the option for recess mounting. “By using various Honeywell systems (glass-break detectors, smoke detectors, motion detectors, IP camera system, etc.), we were able to integrate all components into an easy-to-operate system, and one that significantly reduced the number of false alarms,” he says.

In addition, Advanced Alarm installed a Honeywell IP camera system on the outside of the six buildings, which Sperrazza says eliminated the need for them to add a less-than-appealing perimeter fence or an around-the-clock security officer. “With this system, the staff could also review the building remotely on smartphones and tablets, providing a peace of mind they didn’t previously have.”

“This was truly the nightmare of all nightmares, but we were determined to help them.”
— Wes Usie, Guardian Alarm Systems, Shreveport, La.

Wes Usie, founder and CEO of Guardian Alarm Systems, Shreveport, La., says one of the biggest challenges his company ran into was when it was contacted by one of its area school administrators to help resolve some problems they were having in one of their schools. The alarm was tripping falsely daily, causing their security guards to be dispatched to the location almost every day for more than a year. “In our initial conversation they said they couldn’t figure out what was causing the false alarms,” Usie says. 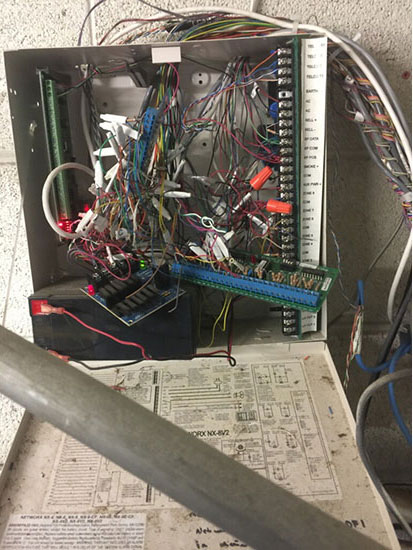 A previous installation that included this panel contributed to false alarms on nearly a daily basis for one Louisiana school building. Photo courtesy of Guardian Alarm Systems

Guardian Alarm Systems sent an experienced technician to the site to try to quickly identify what was causing the problems. “Shortly after he arrived we received a photo of the main panel,” Usie says (see photo on page 94). “The original installation had splice points in six areas above a drop ceiling where the wires were twisted together with no b-clips. Also, all of the multi-conductor cabling to these areas was lying on top of the roof. In the southern United States the sun will bake the jacket off the wire pretty quickly. This was truly the nightmare of all nightmares, but we were determined to help them.”

Usie says his company sent photos of the wiring to the administration and explained what it would take to correct all the problems with the existing system. “At first they were reluctant to spend the money, but they decided to allow us to do the work in just this one building. We rewired and replaced the entire system. The only things reused were the motion detectors. We also provided them with a legend of the facility that allowed them to accurately and quickly determine where an open zone is when they attempt to arm the system. Once completed, the false alarm problems went away and the staff was thrilled that they had a reliable system in place.”

Usie says that as a result of the success of this one system replacement, Guardian ended up repairing/replacing the equipment at more than 70 other locations. “After the repairs on their infrastructure, they were able to reduce their security guard payroll substantially, saving them a considerable amount of money. The school district has become our largest customer and our relationship remains strong today.”

Tom Echols, president of the global group for Security 101, West Palm Beach, Fla., says the biggest challenge Security 101 faces is dealing with a security intrusion type system in a multi-floor, multi-tenant building “where your customer is one of the tenants, and you have very diverse departments in that building — how do you actually manage the security system arming/disarming?”

Echols says the key to securing so many people with such varying hours and jobs is creating a strong perimeter and creatively working within it to meet the needs of the tenants. “Think about your home alarm when you stay in — I turn all the door and windows on, but I’m free to roam around on the inside of the building.

“We’ve developed a kind of early warning system where we actually provide an audible notice with flashing lights that the security system is going to arm in 15 minutes,” Echols says. “Then we let the tenants know again in five minutes, and then we give them another signal one minute before it’s going to arm. That gives people in the building who are still working in their office the opportunity to go to the console and extend that timer or request it to be delayed or disarm it and have to rearm later.”

Bill Marks, major account executive, Imperial Surveillance Inc. Arlington Heights, Ill., (www.ImperialCCTV.com) says a design challenge his company faced this year was for a client who owns a freight forwarding company that was having issues with truck trailers being stolen out of their yard.

“They requested we install hardwired contacts to monitor the trucks, and they wanted us to integrate this into their existing burglar alarm system that we installed,” Marks says. “Although there are similar products on the market, there was nothing that could meet the distance requirements and other needs that were put forth. So after the meeting we sat down with one of our distributors and our in-house design team and came up with a flexible metal cable housing that contained the wires to the door contact and included a quick release that prevented the cables from being damaged when the vehicle pulled away.”

Marks says this configuration has prevented the theft of trailers on two separate occasions so far. “By working with our distribution channels and thinking outside the box we now have a system in place that is saving our clients a lot of time, money and aggravation.”

Whatever the challenge, security dealers across the country have been solving and securing every type of building imaginable in creative and innovative ways.

For more about commercial intrusion alarms, visit the following articles:

Designing Commercial Alarms With an Eye on the Future