An awards program from the National Center for Spectator Sports Safety and Security, sponsored by SDM, recognizes excellence in system integration at sporting venues. These are the 2018 finalists.

Manufacturers and integrators who execute security projects in sporting venues have an award for the work they do — the Golden Eagle Award. The award, sponsored by SDM, is from the National Center for Spectator Sports Safety and Security (NCS4).

The University of Southern Mississippi is home to the National Center for Spectator Sports Safety and Security and the Golden Eagles. This award recognizes excellence in the safety and security aspects of sports venues by their designers, builders and integrators. The award will honor the best project among all nominees each year. The naming of the Golden Eagle Award also recognizes the commitment and work that the University of Southern Mississippi does in contributing to safety and security in the global spectator sports industry.

The security projects from the three finalists are presented on these pages. Their case studies will be presented to attendees of the 2018 National Sports Safety and Security Conference & Exhibition, during a session on July 10, 2018, to be held in Louisville, Ky. The audience then will select one of them as the sixth annual Golden Eagle Award winner. See “More Online” on page XX to learn how the winner will be revealed.

Every August, Little League International brings close to 500,000 visitors to the small town of Williamsport, Pa., for the Little League Baseball World Series (LLBWS). With a population of 6,500, providing ample security for athletes, visiting dignitaries and spectators could easily overwhelm the community’s resources. Even though the LLBWS hires auxiliary security personnel and receives support from volunteers and local, state and federal agencies, Little League International believes cutting-edge surveillance technology is an essential element of its total security program. 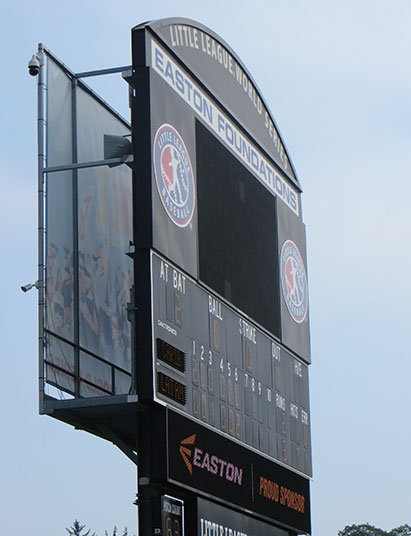 Each year the bases are loaded with an all-star team of solution providers integrating the newest technologies for the highest level of situational awareness. Extreme Networks supports wired and wireless connectivity throughout the complex for Lenel’s access control system and Axis Communications’ surveillance solutions featured in Milestone’s video management software.

LLBWS chose to partner with providers who could deliver effective solutions that easily share video amongst local, state and federal law enforcement agencies. With their guidance, LLBWS sought to continue a partnership with Axis Communications for an 8th consecutive year.

For the 2017 LLBWS, the organization was seeking to improve its existing security installations for an overall improvement to situational awareness. The International Grove complex was particularly important, serving as the residential compound to all of the players throughout the World Series games. As a nonprofit dedicated to keeping the LLBWS a family-friendly experience with no admission fees, the team approached the project with the goal to do more with fewer resource and maintenance costs such as reducing lighting accessories, refraining from pulling cabling throughout the complex, and consuming less energy and electricity. In addition, the day-and-night superior image quality of Axis network cameras enables the security team to improve incident responses with less equipment and maintenance costs. The installation used more than 66 Axis network cameras, bringing the total to more than 120 permanent network cameras in place. Axis’ thermal and radar technologies add another layer of protection around the perimeter. Little League International maintains top-notch security while delivering the ultimate LLBWS experience for athletes, families and fans alike. With these advanced solutions, the Little League International Complex transforms from a rural ball field into one of the safest sports venues.

During game time, the PGA Tour, Scottsdale Police Department and, in general, stadiums and arenas are responsible for the safety of tens of thousands of people. Prior to the most recent PGA Tour, the Police Department coordinated with PGA Tour security personnel, including members of the FBI, the Bureau of Alcohol, Tobacco, Firearms and Explosives, and the U.S. military. Every inch of the PGA tour grounds was monitored and protected, but the airspace remained vulnerable. So Scottsdale Police Department deployed Dedrone technology through a local partner, Aerial Armor, to diagnose the grounds’ airspace activity.

By flying near the event, pilots risk violating federal airspace laws designed to protect public events. A rogue drone would hinder the ability for the Police Department and other security personnel to use aerial response in the event of an emergency. Recently, Arizona had experienced a slew of drone interruptions from pilots, who interfered with firefighters during a wildfire battle.

When an unauthorized drone is in the air, all airspace activity needs to be grounded until the threat is mitigated. Dedrone’s technology provides situational awareness and airspace activity assessment for Scottsdale Police Department to begin understanding drone activity over critical infrastructure and major events. Dedrone’s radio frequency sensor was installed to provide real-time information regarding the presence of drones. It detects drone signals and collects evidence in the event a drone pilot loses control of their drone or flies to cause damage to property or people. Detection range can reach up to 1 mile, depending on installation and environment characteristics.

Aerial Armor oversaw the installation and deployment of Dedrone’s radio frequency sensor and other passive sensors including cameras. Scottsdale Police Department kept a live feed of DroneTracker and provided daily status updates on airspace activity, with hundreds of intruding drones recorded over the five-day installation. DroneTracker immediately began tracking activity, with over 20 drones detected within the first day of installation. As a result, the Police Department was able to protect PGA athletes, media and attendees from drone interruptions every day of the event.

In January 2018, an estimated one million people visited Minnesota for Super Bowl LII and the 10 days of festivities leading up to it. As it was a highly publicized, high-pressure event held in a confined public space, heightened levels of security were required. The Minneapolis Police Department led the way in organizing the massive security effort; more than 80 different public safety agencies and hundreds of law enforcement officers from various jurisdictions participated. 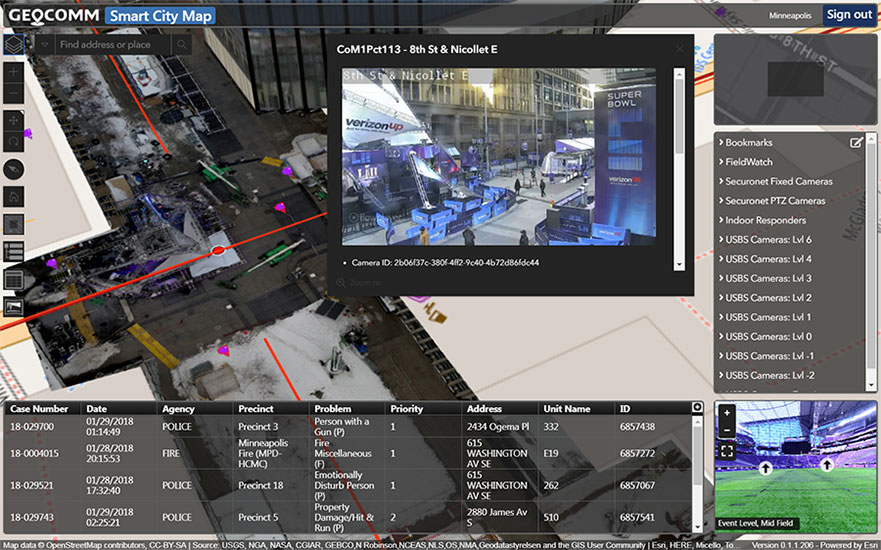 To assist the Police Department in its efforts, GeoComm provided an innovative, new smart city mapping system. The system, called GeoComm Smart City Map, was first utilized by the city of Minneapolis during major planned public events beginning in mid-2017. Across multiple events, the system helped streamline incident response coordination within the Minneapolis Police Department’s Multi-Agency Command Center (MACC) by connecting people and devices into a system for real-time analysis, visualization and communication.

GeoComm Smart City Map system focused real-time information and sensor feeds into a single common operating picture (COP) built around 3D and indoor maps for the Police Department. For the first time ever, public safety users could virtually see into buildings and, through their use of GeoComm’s solution during these events, the Police Department and other agencies achieved a new level of situational awareness, making emergency response more targeted and efficient.

The visual COP provided these agencies with information quickly in one location, allowing decision-makers to gain immediate situational awareness, reducing the risk of loss of life and property damage through decreased emergency response time.

GeoComm Smart City Map leverages the latest Esri technology combining 3D and indoor maps with the Internet of Things, incident management systems, and indoor/outdoor tracking system integrations, getting crucial information to the right people when it matters the most. Watch this video and learn more about how the city of Minneapolis ensured the safety of the public with the help of GeoComm Smart City Map.

At the National Sports Safety and Security Conference & Exhibition in Louisville, Ky., the case studies of the three finalists will be presented to conference attendees on July 10, 2018. The audience then will select one of them as the sixth annual Golden Eagle Award winner, which will be announced on July 11, 2018. SDM will announce the winner on its Facebook page at www.facebook.com/SDMmagazine. If you like SDM in print, please “like” us on Facebook, too, and learn which company was chosen as the sixth Golden Eagle Award from NCS4, the National Center for Spectator Sports Safety and Security.