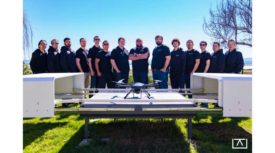 Companies You Should Know: Nightingale Security

When Jack Wu and John Hsu founded Nightingale Security in 2014, protecting premises with drones serving as eyes in the skies was pretty much off the radar for most commercial and industrial enterprises. Now, as Nightingale’s visionaries prepare to celebrate the company’s fifth anniversary in June, they’re also celebrating an innovation whose time has come.

Life Safety: All in a Days Work

Erin Harrington
No Comments
Although many dealers and integrators could make a good living protecting life and property, along with that profitability also comes a humbling measure of responsibility. And liability. Consequently, it’s not
Read More

Erin Harrington
No Comments
Spending is down. The housing market is down. The economy is down. All of this is really getting people down. Is there an up side? Enterprising residential integrators say there
Read More

Erin Harrington
No Comments
Home theaters by Media Rooms are designed to meet the client’s expectations, and not be oversold.As long as customers’ expectations for entertainment are met, they’re happy to accept a less
Read More

Erin Harrington
No Comments
Home theaters by Media Rooms are designed to meet the client’s expectations, and not be oversold.Spending is down. The housing market is down. The economy is down. All of this
Read More

Erin Harrington
No Comments
Many dealers and systems integrators are training their technicians in IT networking courses, including those from CISCO Systems.Network-based technologies are driving the control system industry at lightning speed; they are
Read More
Subscribe For Free!
More Videos