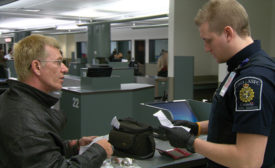 Canada’s border agency ended its reality TV program Border Security: Canada’s Front Line after Daniel Therrien, the federal privacy commissioner, found that the agency violated rights of a construction worker filmed during a raid in Vancouver in 2013 by not gaining “valid consent” to film the incident around his arrest.