Talk to people involved in security dealer financing or buying and selling security dealers about recent trends and you’re likely to hear the word “frothy.” It’s the word that the financial community uses to describe the industry just prior to COVID-19 when security dealers were selling for relatively high prices, expressed as a multiple of recurring monthly revenue (RMR), but as Mike Barnes, founding partner for St. Louis-based Barnes Associates, Inc., puts it, “the average performance of alarm companies had been slipping.”

Market valuations, according to Barnes, were frothy and there was a need for those valuations to moderate, if not come down.

As the pandemic hit, valuations did come down, but metrics improved, which he sees as a positive sign.

“For a good market to occur, you have to have companies performing well,” Barnes says.

Some people involved in security dealer mergers and acquisitions (M&A) and financing say there was too much emphasis on growth in the period shortly before COVID-19 for dealers focused on the residential side of the market.

“Companies tried to grow too aggressively and took on a lot of debt to grow,” says John Mack, executive vice president and co-head of investment banking for Los Angeles-based Imperial Capital. “The cost to generate sales was too high, attrition was higher than expected, and gross margins were not necessarily as good as expected.”

Margins were thinner than expected because companies had to offer more services than expected to be competitive, he notes. A few large companies got to a point where they couldn’t service their debt and had to declare bankruptcy or go through out-of-court restructuring. Mack refers to the plight of these companies as a “downdraft” that has made investors wary of smaller companies as well, depressing the price that companies are willing to pay.

“There was too much emphasis on growth,” he observes. “The overall economics weren’t as favorable as they had been. We have moved beyond that phase, but capital is still tight for residential alarm companies. Growth has slowed a bit in that sector and some of that is healthy — the economics are better, and companies are getting a better return on their investment in new customers.”

Residential alarm company valuations are off their frothy highs, says Jim Wooster, president of San Rafael, Calif.-based Alarm Financial Services, but are holding steady at what he sees as a more realistic level.

Mack notes that residentially focused companies that fund growth through cash flow, whose cost to create customers is not out of control, and who manage attrition and margins well are trading at valuations closest to historic norms. 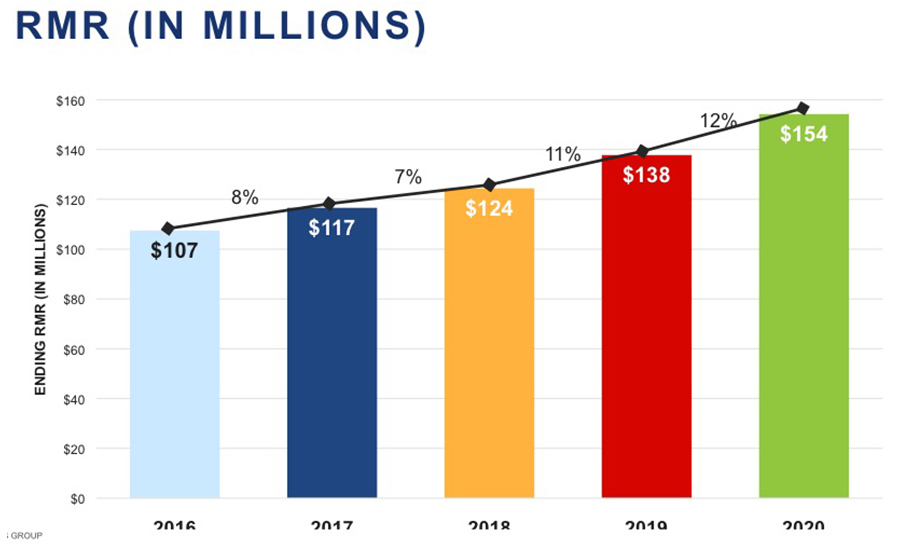 VRI sold for $315 million, yielding a multiple of 67 times RMR, according to The Edmonds Group.

Perhaps the news isn’t surprising, considering the performance of PERS companies over the past five years. According to research conducted by The Edmonds Group, there were 4.5 million PERS subscribers in 2020, a big increase from 3.1 million in 2016.

The healthcare channel also sees less attrition. The annual rate is 27.2 percent, compared with 31.6 percent for the direct-to-consumer channel. According to The Edmonds Group President Henry Edmonds, valuations are stronger for dealers that sell through the healthcare channel.

An important development that essentially signaled the end to the frothy period in the security business came in 2019 when some major banks that had made large loans to large dealers either stopped making loans to the industry or were scaling back on the size of loans, expressed as a multiple of RMR, that they were willing to make.

When less capital is available, buyers may not be able to make as many deals and may not be able to pay as much for companies they do acquire. The banks’ moves were of particular concern, considering the unique nature of the security industry. Many banks are uncomfortable with the concept of making loans based on RMR.

As he explains, managers of these funds argue that they understand the security business better than the banks do and that they don’t take any more risks than banks do.

CIBC Bank, whose U.S. headquarters is in Chicago, is one bank that does make loans to security dealers.

Mark Melendes, security industry group head for CIBC Bank, sees some more banks getting involved in the industry. Some regional banks, he says, are learning how to use RMR as an asset.

He notes, though, that the business of lending to security dealers isn’t as frothy as it was from 2017 to 2019. “The RMR multiples offered by banks have leveled off,” he says.

“Family office and private equity are increasingly interested in a minority investment [in a security dealer],” he says.

Family offices invest the money of wealthy families, who have become more professional about their investments and have hired people with a private equity background, Stang explains.

Taking on a minority investor in the form of a private equity firm or family office is a very good development for companies that don’t want to give up control, Stang says. “If returns are good, it’s good for everyone.”

Things are Different in the Commercial Market

At the same time that dealers focused on the residential market have faced major challenges, dealers and integrators that focus on the commercial side are experiencing a heyday.

“There is very strong interest in commercially oriented companies and prices are at an all-time high,” Edmonds says.

“If a commercial company has very low customer acquisition costs, is making money on new sales and has a nice profit margin and low attrition, it will be higher valued than a residential company with higher attrition and a margin squeeze,” he says. “The fundamentals of the commercial business have been strong and improving and fundamentals of residential have been weakening.”

Melendes says that commercial in integrators have seen increased sales of video and access control systems amid the COVID-19 pandemic, as employees work from home and businesses seek to secure locations where fewer people are working.

“Integrators are in demand now; there is a lot of activity there,” he says.

Sean Forrest, CEO of West Chester, Pa.-based Alarm Connections LLC, sees the strong valuations for dealers and integrators specializing in commercial and commercial fire systems occurring because, “Several large players are trying to build out their footprint and have been buying local commercial alarm companies.”

In some cases, these large players have been in competition with one another on acquisitions, which has driven up the price, Forrest says.

Forrest sees strong interest in companies specializing in fire systems because regulations in that area have become tighter and expectations have increased, which has resulted in higher revenue for those companies.

Buyers like dealers and integrators that do fire systems because that business is very profitable and stable, says Rory Russell, owner of Albany, N.Y.-based Acquisition and Funding Services.

“[Fire is] not subject to the whims of the economy,” he says. “There is a plethora of capital for the fire/integration business. There are more well-qualified buyers who know how to get a deal done and get it done in a timely fashion.”

These buyers include private equity and publicly traded companies, he notes.

PERS sales have increased, in part, because the large baby boom generation is aging and because people have been trying to take care of loved ones remotely during COVID-19, Melendes says.

“PERS is having a historic year,” he says.

According to Edmonds, “[The direct-to-consumer market] suffered some of the excesses of the residential alarm business, similar lender pullback and softening of values.”

The healthcare channel, however, has very strong economics and all-time high valuations, he says.

Charting the “Frothy” Period & its Aftermath 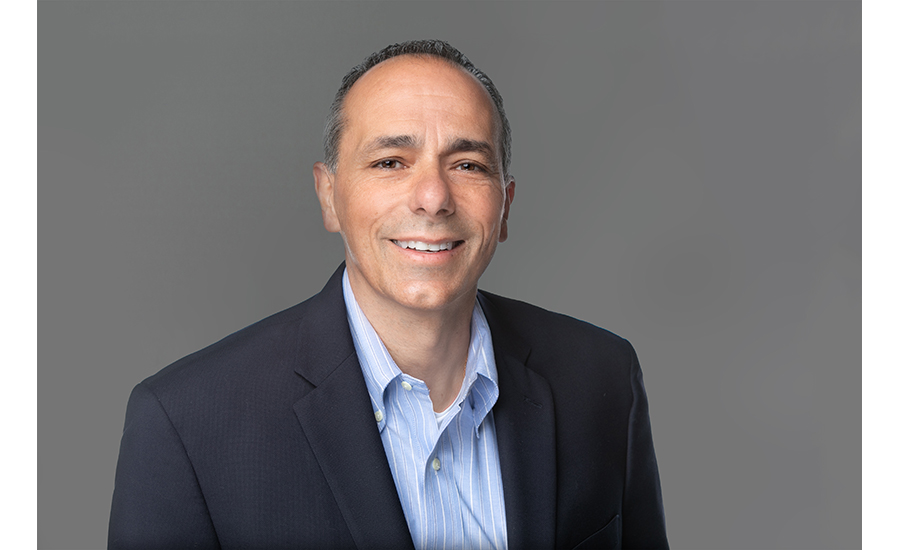 The following chart from Barnes Associates illustrates the upward trend in security company sales that culminated in what insiders call the “frothy” period between 2017 and 2019 when, some say, residential alarm companies were overvalued. The chart also shows the aftermath, where valued have dropped. 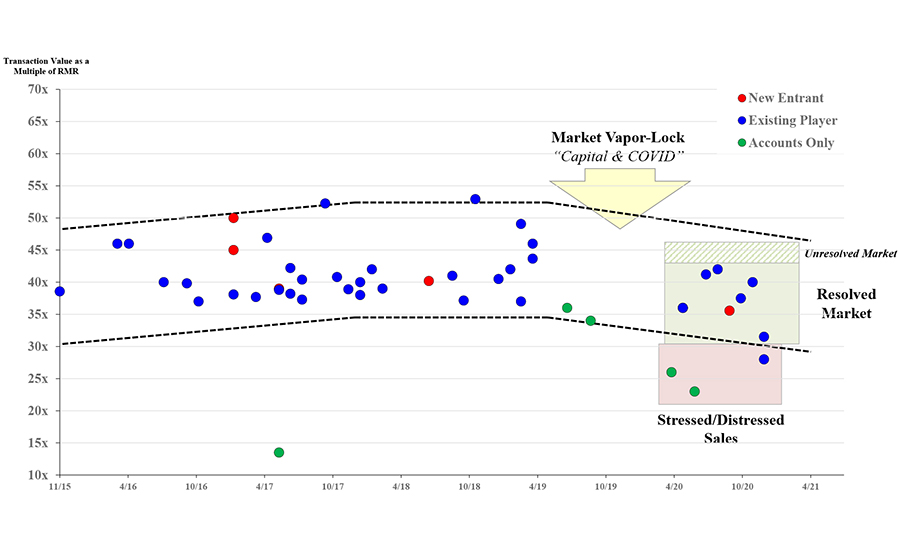 Just prior to COVID-19, some companies traded above 40 times RMR.

But as Mike Barnes, Barnes Associates founding partner, explains, the “’bid-ask’ spread widened too much in late 2019, with sellers expecting high values, while buyers were feeling the withdrawal of two key lenders to the industry.”

Another factor, he says, was investor concerns over increased risk in the industry. In an apparent reference to companies like Amazon and Google, he says the concerns involved new entrants and the potential for disruption.

Although the new entrants have not been as disruptive as expected, what followed was what Barnes calls a “vapor lock” in the market.

“Transactions resumed in the later part of 2020 after the initial shock of COVID-19 and quarantining but at lower valuations,” Barnes explains, adding that those deals are referenced on the chart as the “resolved” market.

Barnes also notes that there would have been more transactions, as, “A number of sellers came to the market seeking to sell and receiving solid offers but not transacting as a result of the value not being quite high enough.” Those deals are labeled as the “unresolved” market.

Finally, Barnes notes that some distressed companies were sold at relatively low valuations.

Moving forward, however, “The stage is set for a relatively high level of acquisition activity over the next year-plus,” Barnes says.

Barnes Associates charts this information for presentation annually at the Barnes-Buchanan Conference, which will take place this year on February 10-12, 2022.

Even though valuations for residentially focused security companies are down compared to the period before COVID-19, it’s important to recognize that the two years just before the pandemic were frothy, as the pundits say. There was too much emphasis on growth, valuations were too high, and fundamentals were down. With fundamentals improving, it’s logical to expect valuations in the residential market to stabilize and perhaps pick up.

Meanwhile, dealers and integrators on the commercial side have seen more steady improvement in fundamentals and are seeing the valuations to prove it. Buyers and investors are particularly keen on dealers specializing in PERS and fire.

Fortunately, the high valuations we’re seeing in these areas are grounded in strong fundamentals. In other words —  they’re not “frothy.”