Nestled into the base of the Sierra Foothills and on the way to California’s Yosemite National Park, the Chukchansi Gold Casino and Resort offers visitors and locals alike a scenic gaming and entertainment destination. It is owned and operated by the Picayune Rancheria of Chukchansi Indians and features 56,000 square feet of gaming space with 1,750 slot machines, 36 table games, a nightclub and a players club, as well as dining and entertainment services.

The casino opened in 2003 with a Pelco video surveillance system including Pelco cameras and the Endura video management system (VMS), designed and built by systems integrator SSI, Rocklin, Calif.. Since that initial installation, SSI has helped guide the casino in making decisions regarding the addition of new IP cameras, upgrading the infrastructure and ensuring compliance with tribal, state and federal gaming regulations. Most recently, the casino gave the go-ahead for SSI to replace the existing Endura VMS with Pelco’s newest VMS, VideoXpert. In doing so, Chukchansi Gold will further improve its ability to monitor gaming table and slot machine activities, cash rooms, a recently-added service station and convenience store, and other areas of the property while establishing the groundwork for future scalability.

“We have worked hand-in-hand with Chukchansi for the past 14 years and knew they would benefit greatly from the efficiencies and expansion Pelco’s VideoXpert VMS offers,” said Todd Flowers, president of SSI. “The upgrade from Endura to VideoXpert was seamless as the changeover was accomplished with little to no disturbance of their operations.” 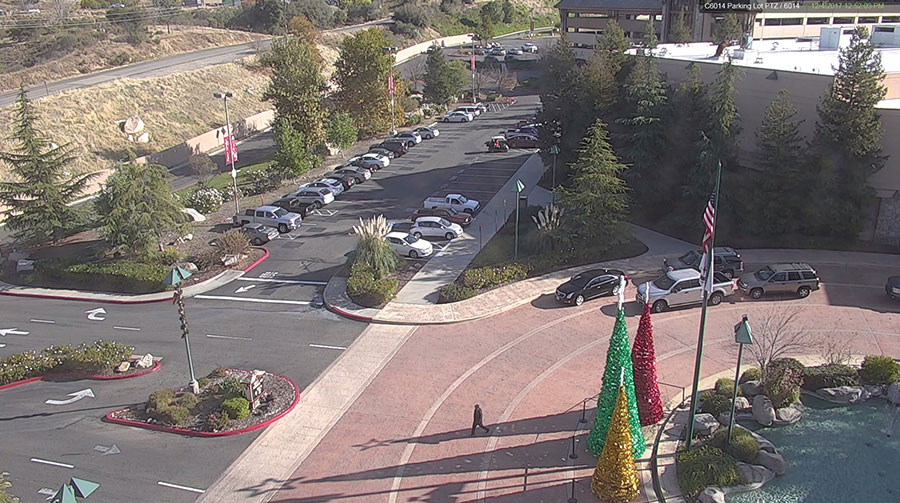 The new VMS solution tackles the casino’s need for more functional monitoring and control of the video surveillance system. The software’s extensive capabilities allow them to plan for growth and added functionality through on-board features, as well as third-party integrations. Photo courtesy of Pelco by Schneider Electric

Flowers points out that the new VideoXpert VMS solution tackles the casino’s need for more functional monitoring and control of the video surveillance system. The software’s extensive capabilities allow them to plan for growth and added functionality through on-board features, as well as third-party integrations. With an intuitive browser-like interface that utilizes tab views for a single source experience, views can be called up via sequencing, alarm tabs and event viewer features such as the bookmark feature. This allows operators to quickly review incidents by capturing scenes from multiple angles and then synchronizing the video, utilizing VideoXpert’s investigative engine that quickly locates and collates video. Another important feature for improving efficiency is tagging, which allows cameras to be tagged with multiple names, providing the means for very specific and dedicated search operations.

Infrastructure upgrades are often finished prior to implementing a new video surveillance and control system, but in Chukchansi Gold’s case, the upgrade was concurrent with the VideoXpert VMS and a new control room install. These capabilities allowed for a smooth crossover because SSI could install the new VMS in parallel with the casino’s existing Endura system. For example, SSI could map Endura components nearly one to one with VideoXpert. Pelco’s simple migration application also enabled Chukchansi to migrate its entire Endura database, ensuring a relatively seamless transition between the VMS solutions. The migration process transfers user names, roles, permissions and the associations for all three items, allowing authorized Endura users to maintain their same roles and the permissions when using VideoXpert. The migration process also transfers all camera names, numbers, groups and locations.

Plans for the changeover also included the casino repurposing its existing Endura-based storage. All that was involved was to upgrade the NSM licenses and then deploy the cameras and migrate them over to VideoXpert. This saved the casino considerable budgeted funds that were subsequently applied to adding new Pelco IP cameras and a more efficient control room. According to Flowers, this made economic sense in several ways for Chukchansi Gold.

“More cameras equal better surveillance and security for the casino,” he said. “Pelco’s new IP cameras have better compression technology for optimized bandwidth utilization and storage requirements. Each part of the Pelco solution adds to the overall cost effectiveness and efficiency of the system.”

Another system advantage pointed out by SSI can be seen in the control room. The decluttered workstations contain only an enhanced keyboard and a 3D mouse. Operators are trained on VideoXpert usually in less than a day.

Per the California Nations Indian Gaming Association (CNIGA), tribal government gaming is subject to more stringent regulation and security controls than any other type of gaming in the United States. Chukchansi Gold is confident that its newly upgraded Pelco video surveillance and control system more than meets these demands, and puts them at the forefront of tribal gaming trends in California.

“We have been able to meet regulatory demands and ensure a safe and secure experience for our staff and guests by leveraging new technology,” said Tommy McDonald, surveillance manager, Chukchansi Gold Casino and Resort. “We couldn’t be more pleased with the results.”