Resistance Is Futile: Interactive Services Are Here to Stay

Until recently interactive services may have seemed like a novelty or a fad, but that is all changing, as the market trends toward remote services and interaction.

The vision for interactive services has been around since at least the ’60s, when Star Trek’s Captain Kirk, Mr. Spock and the poor doomed red shirts walked through the foam sets of the Enterprise to the transporter room as doors swished open automatically before them, talking to the computer and interacting with their ship in a way that would be only a science fiction dream for decades to come.

Now, the technology most people have in the palm of their hands would, by comparison, make Kirk and his crew the laughingstock of the Federation of Planets. Imagine if instead of an early 2000s-era flip phone communicator, Captain Kirk could have turned on his smartphone, video chatted with Scotty, pressed a button in his app to beam up, and, in the same app, turned on the light in his quarters and set the temperature to a comfortable 70 degrees? 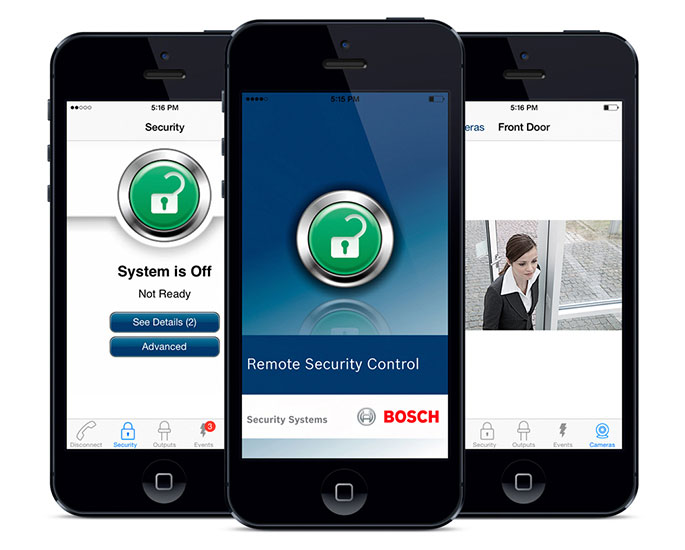 Nearly everyone has or knows someone who has interactive products in their home such as video doorbells, connected thermostats, video surveillance accessible by smartphone, and many others. Photo courtesy of Bosch Security Systems

Interactive technology is here, promising all kinds of conveniences and benefits for people in their day-to-day lives. It’s not just something most people read about in a magazine or see on TV; now, nearly everyone has or knows someone who has interactive products in their home such as video doorbells, connected thermostats, video surveillance accessible by smartphone, and many others. What is really driving this boom is the way these products and networks are starting to play together, allowing people to add what they want with whatever system they already have and control everything with one app.

One app to rule them all

The future seems to be all about making various technologies and products compatible with each other and able to be controlled by one source. In some form or another, it was apps and smartphone control that most dealers and integrators interviewed said they were most excited about.

While the technology allowing customers to interact with their security systems, confirm alarms or cancel false ones isn’t a new concept and has been available to consumers for some time, it is the ability of many products and services from various manufacturers and companies to be controlled by one app that has really ramped up enthusiasm. And not just apps, but voice activated systems such as Amazon’s Alexa and Google Home as well. Nearly every day, more companies are announcing new integrations with voice activated systems. 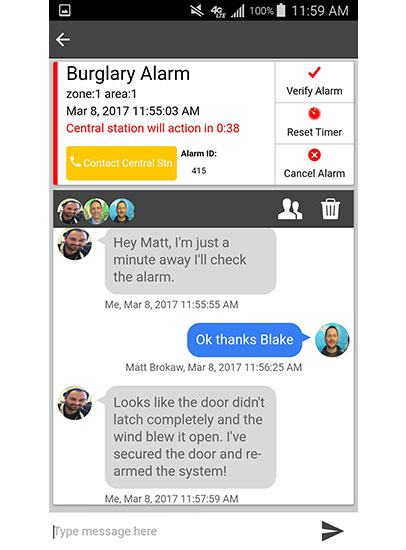 If a sensor is activated, users can receive a notification in real time to take action before the problem becomes serious. Photo courtesy of Bold Technologies

“It’s a different world from even just a few years ago when hardware was the dealer’s primary concern,” says Ilan Dee, director product management and marketing – software, Honeywell Homes, Morris Plains, N.J. “Now, software and apps are just as important, and they’re helping security professionals create systems that excite consumers and expand the pool of potential customers.” Dee cited HD cameras and video doorbells as two examples of options that create a more immersive user experience. “When you combine those types of devices with smartphone apps, it provides an outstanding mobile experience that can help attract new customers. Offering this experience can help attract the interest of customers who typically fall outside the 20 percent of homeowners who currently buy security.”

‘It’s a different world from even just a few years ago when hardware was the dealer’s primary concern.’
– Ilan Dee, Honeywell Homes

As the number of devices compatible with interactive systems rises, customers — and dealers — want one app to control it all, says Warren Hill, product marketing leader, intrusion and smart home, Interlogix, Lincolnton, N.C.

Wizard-based programming can also make it easy for either the dealer or the end user to program automation based on manual, scheduled or location-based events, says Paul Garms, director of regional marketing – intrusion, Bosch Security Systems Inc., Fairport, N.Y. “A dealer or end user could program the lights to turn on, the thermostat settings to change and the security system to disarm when users enter a defined area near their residence or business. These capabilities are enabling dealers to customize solutions to meet the specific needs of their customers.”

As common standards and interoperability increase, people will be able to control all their products across their network with a single app, and that will be a boon to the dealer who can demonstrate the advantages of such a model.

Interactive services aren’t just an add-on or a novelty; they are starting to open doors and deliver real benefits to security professionals and customers alike.

More and more, interactive services are allowing dealers and integrators to go beyond traditional security, generating RMR and allowing them to enter markets they were not playing in before, Dee says. “Our security dealers are now selling home automation services, connected locks, thermostats and lights. And often, they lead with those devices before security. That’s a huge departure even from recent years — [Honeywell’s] customers understand that security is not always the first thing that sells.”

Rather than being the only solution, security now is becoming one piece of an overall solution that has to be integrated with all the other aspects of a smart home. Coles calls smart home solutions that don’t integrate with the security system a waste of time.

In the past, the only interaction users had with their security system was to arm and disarm — if they remembered or bothered to. They were very passive and served the function only of intrusion detection. Now, however, because security alarms are easier to interact with, users interact with them more frequently, enabling dealers to add greater value to the end user’s everyday life. 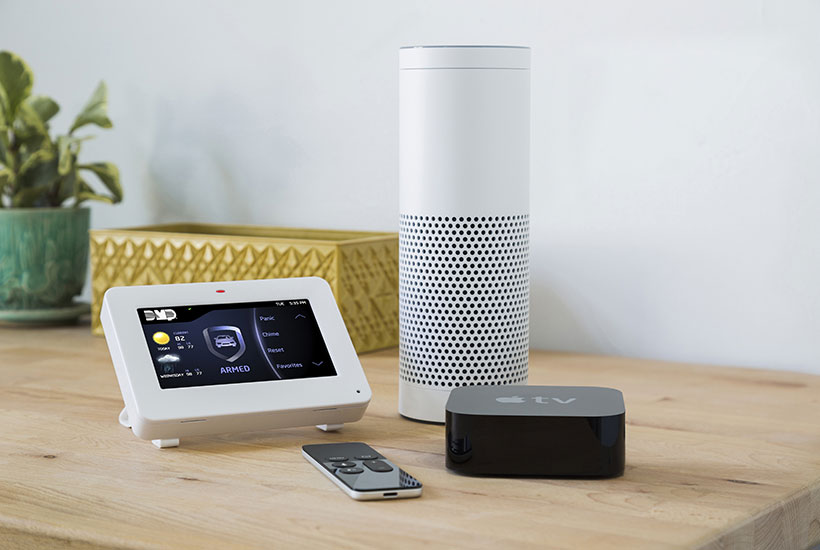 Interactive services are able to be controlled by apps and by voice activated systems such as Amazon’s Alexa, Apple TV and Google Home.

“With interactive services, we no longer look at systems as purely intrusion,” Garms says. “We’re looking at how we can connect the IP cameras to the alarm panel, while bringing in additional services to create an integrated solution that solves the user’s pain points. As a result, the user is much more engaged with their system than they have been in the past.”

In fact, interactive services have become an expected part of the security system now, says Mark Hillenburg, executive director of marketing, Digital Monitoring Products, Springfield, Mo. “I don’t know how anyone could sell an alarm without it nowadays,” he says.

Hillenburg recommends dealers and integrators start offering interactive services as part of the base system and allow customers to remove them for a small discount. “But if you present it and show it,” he says, “they will buy it. It’s really that simple.”

Set your RMR from stun ... to kill

Obviously the best posture for security dealers is one of embracing interactive services and making them work to increase their bottom lines. So what is the best way to translate these industry changes into RMR?

One way, Hill says, is when service providers charge one monthly fee for a basic package and don’t charge [the dealers] for added features; this opens the door for dealers to bill end users a modest fee to create RMR and allows them to improve their service margins. And as more devices become available to integrate with traditional security systems, end users will be able to customize systems to meet their specific needs, allowing dealers to charge more for their security and smart home services.

Dealers can charge a monthly fee for automation capabilities, for access to a mobile app, as well for video monitoring services. With video monitoring services, dealers can offer video verification of alarms on the users’ property for a faster response from local authorities, Garms adds. “They can also offer live intervention and other interactive services. For example, if the monitoring center operator can speak or play a recorded message to a possible intruder, the risk of additional damage to the property is reduced. This is a powerful deterrent that brings added value to the system.”

Like anything, those who will succeed must embrace the change, be creative and, above all, be able to demonstrate the benefit of the service to the customer. Even that, however, is getting easier as customers already know about the products and technologies and are asking for them. The most important thing is to not fumble the opportunity to give customers the interactive solutions that will add value to their lives and to your solutions. To do so would be… illogical.

“One of the most impactful tools we’ve seen to enable better selling is our interactive dashboard in Honeywell AlarmNet 360,” he says. “For example, dealers can use filters and a map view to look at the purchasing behavior of their typical — or average — customers. They can then use that data to develop targeted offers for new customers.”

Dee says looking at individual purchase histories can help dealers create targeted, upsell, and additional RMR opportunities for current accounts. They can use customer purchasing behavior to help reduce attrition, he adds. Filters also help analyze account engagement, accounts with setup issues and those that have not enabled or used specific features — so they can react quickly to end-user needs. “Through our interactive map interface, they can better plan and schedule service calls. All of these insights help AlarmNet dealers and central stations react more quickly to customer service needs.”

For more on interactive services, visit the following articles: