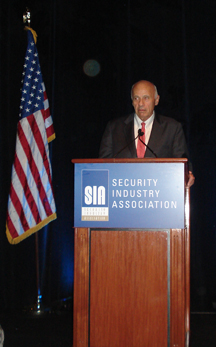 Last night a record high of 310 people attended the 2010 Tri-Association Awards Dinner held at The Lighthouse in Chelsea Piers,. With a gorgeousautumn night and theas a backdrop, the Security Industry Association (SIA), the Central Station Alarm Association (CSAA) and the Electronic Security Association (ESA) honored Leo Guthart and Cecil Hogan for their monumental contributions to the security industry and presented a special award to Admiral Thad Allen, formerly of the U.S. Coast Guard.

“I couldn’t think of a more deserving person to present this award to tonight. I want to personally thank him for his positive influence on me. He’s a consummate mensch,” Forman said. Guthart highlighted the evolution of the security industry since the time when he started at Ademco at 26 years of age and attributed the development of technologies and expansion of the industry to the remarkable “good people” that are a part of it. “You can have great ideas, but you need good people,” he remarked.

The heads of the three associations each took a moment to honor the memory of John A. Murphy, the recipient of the 2009 Triton Award, who passed away Oct. 13 this year.

In Murphy’s place, Ralph Sevinor presented the 2010 Triton Award to Cecil Hogan, founder and president of Security Consultants Inc., , in recognition of his long-standing dedication to the industry and work to re-establish and maintain a good working relationship between the three associations.

“… I had a couple secret weapons when I got elected [as president of ESA in 2002]. The president of SIA was a boy, and the president of CSAA was a good friend of mine and a boy. And it didn’t take long for us to figure out we didn’t need to be mad at one another.” Hogan sat on the ESA board of directors for 18 years.

Also during the awards dinner, retired Admiral Thad Allen received the fourth annual Fred V. Morrone Memorial 9/11 Award for his contributions to homeland security. Allen was a leader during the Deepwater Horizon oil spill in the , relief efforts for Hurricane Katrina and the Sept. 11 terrorist attacks.