By Karyn Hodgson
Although high-end technologies often get the glory these days, tried-and-true ones still have an important place. Integration and smart cards may be sexy, but the stalwart stand-alone system is still a must-have in many access control applications.

When it comes to stand-alone systems such as keypads and electronic door locks, your customers want rugged reliability. Although the technologies and how they are used vary widely, end-user companies who employ these types of systems for the most part want to keep them simple and easy to use.

Keypads are clearly the workhorses of security. â€œKeep it simple,â€ said one respondent to an informal SDM online survey of Security Magazineâ€™s end-user subscribers. â€œThe more gizmos there are on the system means the more things that can and will go wrong.â€ Only one-fourth of respondents were interested in high-end features or built-in biometric technology.

Another respondent touted simplicity on another level. â€œEase of use for your employees is paramount. If it is difficult to use, they will find ways to circumvent it.â€

At the Department of Veteranâ€™s Affairs in West Palm Beach, Fla., keypads are used throughout the facility, but especially in the pharmacy, says Tracy Johnson, chief of processing and decontamination.

At the VA hospital, it is important to keep records. That is why the hospitalâ€™s keypads are linked to a hard drive. â€œAnyone who uses their code to enter a specific door, it will log in that information,â€ Johnson notes. 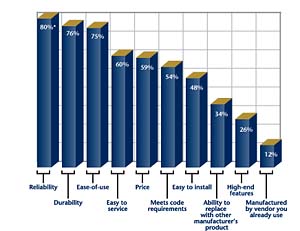 Vandal-resistance and reliability in the door lock are key features for William Gordon Jr., assistant superintendent, reception and diagnostic center, for the Department of Juvenile Justice in Richmond, Va.

â€œWe have keypads for several of our doors in the main building,â€ he says. â€œI run a prison, so the [magnetic] locks canâ€™t be opened unless with a key. The keypads allow authorized people to go out.â€

Keith Dean, director of security, Great Eastern Resort, Harrisonburg, Va., uses keypads for safety in conjunction with magnetic locks. â€œWeâ€™re currently in the process of finishing a water park at the bottom of the mountain,â€ he says. â€œWhen itâ€™s completed, it will be the largest indoor/outdoor water park in the eastern United States. Weâ€™re using electronic access for the egress systems at some of our outdoor pool areas.â€

Keypads are located on the outside of the pools so employees can enter that way, but the doors are locked to guests and alarmed on the inside.

â€œThe reason we keep it locked is when the pool is not in use, we donâ€™t have lifeguards,â€ he says. â€œBut this system still allows it to be used as an exit in case of an emergency.â€ 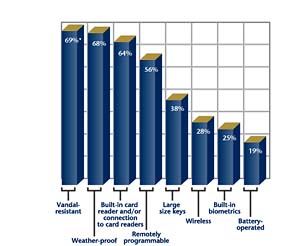 Stand-alone door locks differ from keypads in that they can use a multitude of technologies for opening the lock, from keypads or push buttons to proximity and smart cards. Although reliability and durability are considered important features, those interviewed were just as concerned about how a door lock operates as how durable it is.

â€œWe use these systems in hospitals quite a bit, as well as in some computer room applications,â€ he reports. â€œThey are very good for mechanical rooms (a room within a room).â€

For Roseâ€™s clients, stand-alone access control systems are a good fit when they want them to be easy and secure. â€œNormally when Iâ€™m working with customers, this is where they want their quick, inexpensive fixes, but donâ€™t necessarily just want a PIN system,â€ Rose notes. â€œThey want a full audit trail.â€

Another advantage to these types of systems, Rose explains, is that they can be tied in with the overall security system. Often, employees can use their existing access control cards on the stand-alone system.

â€œWith a lot of our companies, we can normally set something up for the stand-alones within their hardwired access control systems,â€ he notes. â€œThey are very convenient. They are great for rooms with very little turnover. Itâ€™s part of a cost savings. Whenever you start looking at cost-benefit, itâ€™s wiser to go stand-alone.â€ 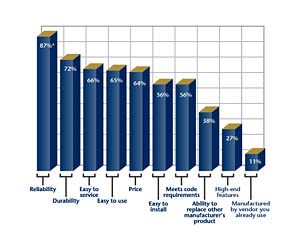 Comments from respondents to the informal SDM online survey reflect the idea that these systems are not quite as straightforward as on the keypad side. â€œKeep it simple, but up-to-date,â€ suggested one respondent.

â€œMake sure that they can be integrated into an access system as the customer wants to expand their use,â€ said another.

â€œConfirm that any technology is consistent with other technologies in use at the facility,â€ said a third.

Andrew Robinson, CEO of Comm-Tech, Prescott Valley, Ariz., views stand-alone electronic locks as one of many security tools at his facility. The company does research and development for mining operations of a sensitive nature.

â€œWe use them mainly in several mining operations that have security issues, and they are using them for access control,â€ he explains. â€œOur security plan is layered. One or two things arenâ€™t going to do it. But if you put up six barriers, it might. This is just one of the layers of security.â€

Robinson also cites reliability as a top concern. â€œWe are looking for reliability more than anything else,â€ he emphasizes. â€œSome of these projects are fairly valuable, so cost is not an issue.â€

More than one-third of respondents say their company reviews their current keypad and electronic door lock systems with regard to changing needs or new technology on an ongoing basis. However, about the same number do such reviews less frequently than once a year.

For those who are considering purchasing a new system, 27 percent cited the need to improve security at their facility as the main reason. Twenty-three percent said problems with their current unit would cause them to select a new or different system, and 18 percent said new technology would entice them to make a switch. N

Rugged reliability and durability are what customers say they want from keypads and stand-alone electronic locks, according to SDM's research of your potential customers. 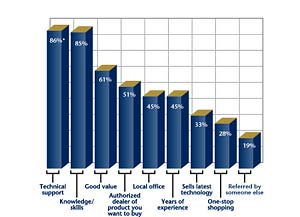 What They Expect from You: Knowledge and Support

Across the board, the level of dealer support and knowledge is paramount to end-users who purchase access control products.

in selecting a vendor or the security dealer. â€œDealer support is very important,â€ said one respondent.

â€œTimely response to issues/questions/ concerns with one point of contactâ€ was the suggestion of another.

Nearly as many respondents â€“ 85 percent â€“ cited knowledge and skills as an important factor in choosing a dealer. â€œConsider the long-term support and maintenance of the system, and the expertise of those who will be maintaining it,â€ said one.

Also high on the list were value and having a local office. â€œAlways buy from a local dealer with knowledgeable field staff,â€ advised one respondent.

As the Editor-in-Chief of SDM, Karyn Hodgson is responsible for the overall editorial direction of the magazine, its supplements, e-newsletters and website. She works with the SDM editorial staff to develop content that helps security dealers and systems integrators operate successful businesses. Karyn represents SDM at trade shows and conferences, and directs exclusive research studies such as the SDM Industry Forecast. She also manages SDM’s Dealer of the Year and Systems Integrator of the Year Award programs. Karyn has an MSJ in Journalism (magazine publishing) degree from Northwestern University, and more than 25 years’ experience writing for and about the security industry. Contact Karyn with article ideas.