How to Buy Batteries & Power Supplies

All types of security systems - including intrusion detection, access control, video surveillance and fire protection - rely on batteries and power supplies. Typically, batteries and power supplies are used together to convert incoming 110/120-volt electrical service to meet the lower 12- or 24-volt requirements of the security industry and to provide backup in the event of a power failure. The power supply is responsible for transforming the power and for charging the battery, while the battery is responsible for backup.

In addition to the voltage specification, batteries and power supplies are rated in ampere - or amp - hours, which indicate the product's capacity. One amp-hour is the amount of power needed to provide 1 amp of power for an hour - although the president of one power supply manufacturer says that formula is a bit "idealized." In theory, dividing a power supply's capacity in amp-hours by its load, measured in amps, should give your system run time, notes Dan DeMerchant, president of Highpower Security Products LLC of Meridien, Conn. But that number will be just an approximation, he says. "Leave a 20 percent cushion for longer power supply life," DeMerchant advises.

Stephen Custer, vice president of Oberlander Alarm Systems, a Peoria, Ill.-based security installing company, leaves an even wider margin. "We won't load a power supply to more than 70 percent of its value," he says. "If the power supply isn't stressed, you get good longevity. If we get to 60 percent to 70 percent of the load on an alarm system, we add auxiliary power supplies." 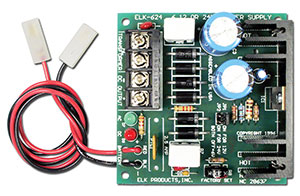 As Kile Unterzuber - who is an instructor for the National Burglar and Fire Alarm Association's National Training School and a senior consultant for Security Management Consulting of Raleigh, N.C. - explains it, determining amp-hour requirements is a three-step process. "First, you need to know what your operating voltage and current requirements are, particularly the current requirements when the system is in alarm," Unterzuber says. "This will determine the current capacity of the power supply and whether you have to use multiple supplies."

Additionally, installers must consider how fast they need batteries to charge, Unterzuber says. "In the case of a fire alarm system, the batteries need to charge completely in no more than 48 hours," he notes. "This means you need to have enough current to operate the alarm system while charging the batteries at an adequate rate."

The third consideration is how much battery backup time is needed. "Most fire alarm systems need to operate for at least 24 hours on the secondary power supply and then sound for either four or five minutes," he says. Like DeMerchant, Unterzuber advises dealers not to cut capacity requirements too closely. "The VA rating is just a coarse tool to estimate battery capacity and you need to be generous in your design to make sure you have enough backup," he says.

A battery with insufficient capacity may provide insufficient backup time. But the downside of choosing a power supply with insufficient capacity may be more difficult to detect - and just as damaging, notes Trudy Hammer, marketing manager for battery manufacturer Elk Products Inc., Hildebran, N.C. If the power supply used isn't adequate, the system will draw from the battery even in everyday operation, which can accelerate battery corrosion and decrease battery life, Hammer explains. "Once a battery is corroded at 30 percent it will no longer maintain a charge," she says. Installers also need to recognize that a battery's power does not decrease in a steady manner over its lifetime, but instead decreases slightly for the majority of its life, then drops abruptly near the end, Hammer advises. To help ensure maximum battery life, Hammer recommends selecting a battery that does not use recycled lead. 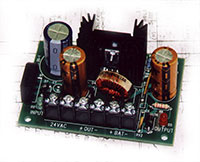 In selecting a power supply, dealers must make several important technology choices. One of these is whether to use a linear or a fixed power supply. That choice determines how the power supply handles the transformation from one voltage level to another. As DeMerchant explains it, linear power supplies burn off excess voltage as heat. "A switching power supply doesn't do that; it rapidly turns on and off to regulate the voltage through filters," he says. "For anything under 1 or 2 amps, you can go linear. Above that, you have to go with a switching power supply. The reason people use linear is that you have less noise on the output, which can affect things like card readers, keypads and other sensitive electronics."

Linear power supplies, however, are generally less efficient than switching power supplies, notes Gene Pecora, general manager of power supply manufacturer Honeywell Power Products of Northford, Conn. A power supply's efficiency, he explains, is measured as a percentage, indicating the amount of energy coming into the supply that is converted to energy on the way out of the supply. A good efficiency rating is in the range of 85 percent or higher, Pecora says, adding that legislation is pending in California to outlaw power supplies with efficiency ratings below 60 percent.

Depending on the application, installers also may need to choose whether to use a plug-mounted power supply that connects the device under power to an electrical wall outlet or a centrally placed unit that can power multiple devices. The second option is becoming increasingly popular for installations with multiple video cameras, Pecora notes. The reason, he says, is that it helps eliminate the interference that may appear on the video images when multiple cameras are plugged into different electrical outlets, which can mean that the power is not synchronized. "If you plug in several supplies, there's no guarantee that the power will be synchronized because it could come from different legs of the input to the building," Pecora explains. "If the system draws all of its power from one point, the cameras are synchronized."

Transient protection, which helps insulate the device that is being powered from fluctuations in the electrical service, is another power supply feature that can help ensure that a system runs smoothly. One form of transient protection is to use a fuse that opens when an over-voltage or high-current condition occurs. A more sophisticated approach is to use metal oxide varistors or other built-in components, which help ensure that surges or spikes bleed harmlessly to ground, thereby protecting the device under power. 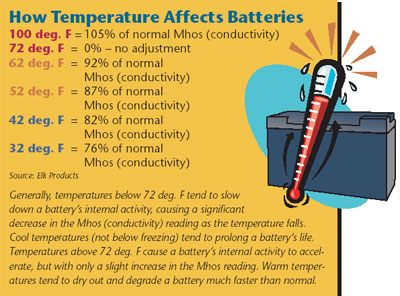 For security systems that cannot tolerate even a brief disruption of power, such as high-end video surveillance systems, dealers may want to consider an uninterruptible power supply, or UPS. A UPS combines the functionality of a power supply and a backup battery in a single device that also may have a built-in mechanism to help ensure that the system continuously receives steady power voltage. As John Chappie, vice president of sales and marketing for UPS vendor Ditek of Largo, Fla., explains, many cameras have routines programmed in that can be lost if power is interrupted, requiring a service call. Custer of Oberlander Alarm Systems likes to use a UPS to back up surveillance cameras, because if intruders cut power on a break-in, the cameras - which run for 15 to 20 minutes on a typical UPS - often will have sufficient time to capture images of the intruders. If customers want longer backup time, Custer notes that some UPS systems can support additional batteries.

UPS systems come in three different varieties - standby, active and on-line. As Rich Mitchell, director of technical support for Ditek, explains it, a standby UPS, which is the lowest in cost, typically provides power as a square waveform, while an active UPS uses a voltage regulator to provide a sine wave. "It's like the difference between a jab and a punch," Mitchell says. "The square wave would be a lot of punches. It provides more abrupt power delivery and puts higher stress on the power supply it's feeding. The active supply controls the voltage output so it goes to the battery less often and does a better job of conditioning irregular power without resorting to going to battery only." Custer says he uses active UPS products exclusively.

At the high-end of the UPS market is the on-line or double conversion UPS. "An on-line UPS isolates everything plugged into it from the incoming utility so that equipment always sees steady power," Mitchell says. John Pecore, president of UPS vendor Stormin Protection Products Inc. of St. Petersburg, Fla., elaborates. An on-line UPS, he says, converts incoming electrical service to a higher frequency, then down to the lower voltage required by the security system. "The higher the frequency, the better control and less power consumption you get," Pecore says. Because on-line UPS products usually sell for $1,000 or more, however, their use is generally limited to the highest end installations.

Another high-end (but at around $700, a bit less costly) UPS option is the automatic-disconnect UPS. This type of product uses a subscription-based service to communicate with the National Lightning Detection Network. In the event of lightning within a 4-mile radius, the UPS completely disconnects itself from the electrical service, thereby isolating the security system from the potential ill effects of a lightning strike.

8 Tips for Selecting and Using Batteries and Power Supplies