Dealers also have settled into a diversity of products and services outside burglar and fire alarms. This is especially true of the growth of CCTV video surveillance â€” handled by more dealers than ever before and a continuing hot purchase by end user buyers, mostly, of course, at nonresidential sites.

It is an important indication of the influence of technology within the security business that dealers, for the first time in the nearly two decades of the SDM annual business activity survey, rank â€œkeeping current with technologyâ€ among the top four challenges they will face over the next several years.

The annual SDM Magazine survey of business activity is the oldest such continuing industry research.

On an annual basis, SDM surveys a large, representative sampling of all types and sizes of security dealer and installer firms. This annual survey provides valuable insights into current condition and future trends. 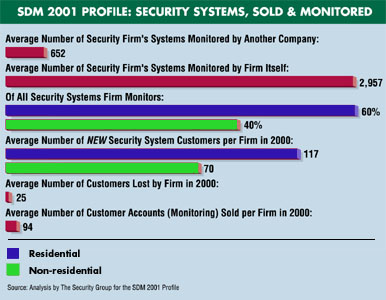 For the average security firm, the sale of the account to a third-party monitoring organization, dealer programs and attrition place significant pressure on the constant need for new security system customers.

In October 2000, SDM mailed out a questionnaire to 2,000 top executives at active dealer, installer and systems integrator firms. There was a total of 14% responses that were usable.

Survey results cover myriad topics. Included among them are dealer response about such factors as industry consolidation and use of the Internet by dealers.

Thereâ€™s no doubt, of course, that a small group of the largest security firms control a sizable portion of the total dealer market. SDM ranks these largest dealers that install in its SDM 100 report.

That mix of sizes of businesses and market share is a fairly common situation in many industries. So is the push for consolidation, which, according to the SDM study, has slowed significantly.

About 6.5% of dealers report they have been involved in the purchase of another company in 2000 as compared to 9.3% the year before.

Based on SDM survey follow-up interviews, consolidation has, in many ways, instead concentrated among manufacturing firms and through the global arena.

If there is any element more important to dealers than the impact of consolidation, according to survey respondents, it is the growth of revenue and the keen need to protect and grow profit margins.

When dealers were asked to project revenue growth for 2001, they are very bullish. Nearly three-quarters of dealers (73%) believe their revenues will go up this year as compared to those who reported revenue growth last year.

They are just as sure when asked to rank whom they consider their stiffest competition. 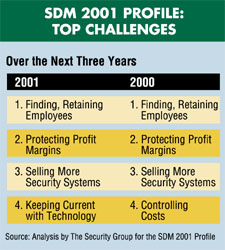 Continuing into year 2001 is the U.S. tight labor market. But for the first time, dealers rank "keeping current with technology" within their top four challenges. That's thanks to more sophisticated home systems integration and the computer, communications and video tech advances in both residential and nonresidential installations.

With so much good news â€” higher revenues, more diversity of business, a more stable business environment, more growth this year, it's ironic but not surprising that dealers face troubling Year 2001 signs.

Foremost are the state of the U.S. economy and its "twin sister," the high price of energy.

It's also obvious that the slowing U.S. economy may not impact every business and every region in the same way. 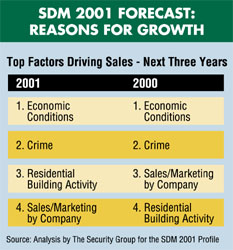 Year 2001 may prove the most challenging in recent memory as the economy slows, crime is significantly down and new home construction and existing home sales also slow. However, most economists also believe the U.S. economy is still strong and housing is still hot.

But equally troubling â€” at least in a macro way â€” is the feeling that sustained high cost of energy could spur a harder "landing" of the economy.

There is some historic truth to such concerns.

Recent previous U.S. economic recessions had â€” at their heart â€” escalating energy prices. There is more than just a feeling that the U.S. economy is slowing down. 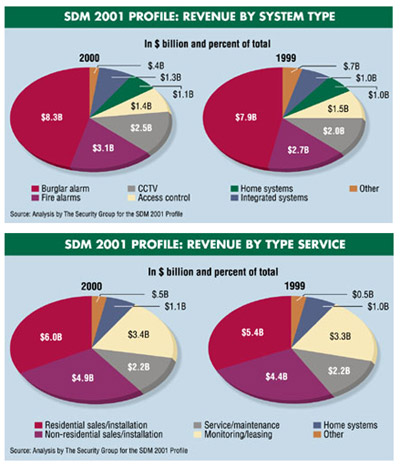 Among trends over the course of our years: less percent of revenue comes from "bread-and- butter" burglar alarms, more revenue comes from "hot" CCTV, while more sophisticated integrated systems revenue continues its upward climb. Looking at total revenue by type of service (as compared to products), dealer firms report rather consistently from year to year, although revenue from nonresidential clients has gone up.
About two of every three U.S. manufacturing firms are now "concerned or worried" about their business in 2001, according to the National Association of Purchasing Management. Manufacturing firms are slashing their estimate of revenue growth this year â€” now at 4.4%. Nonetheless, nonresidential construction spending seems on track through 2001, with differences depending on region of the country and type of business. 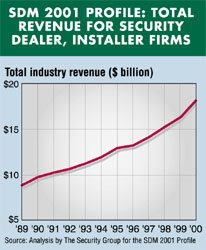 There is still robust growth in total revenue through dealers, although growth more often depends on the size of a business, its region of service and its diversity of product and service offerings.

On the residential side, sale of existing homes and new housing starts slowed a bit in 2000, with most housing analysts predicting a continuing slowdown through at least mid-2001. It is important, however, to note that last year proved the second best year on record for new home construction and home resales in the U.S. And, again depending on the hard or soft landing of the slowing economy, homebuilders should have a reasonably solid year 2001 nonetheless.

When viewing the dealer sector from the standpoint of residential versus nonresidential business, the SDM survey discovered factors proving both consistency and change. 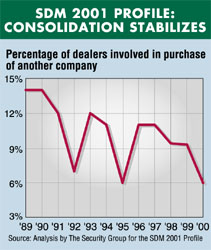 Consolidation, as measured by those firms saying they have purchased another security-installing company in the past 12 months, has dropped to a level similar to 1995 and 1992.

The allure of larger, commercial jobs also is rather obvious: larger margins and often a longer, deeper client-to-dealer relationship.

Over the past year, there has been a lot of talk and media coverage about home systems (the new political correct phrase for â€œhome automationâ€) and home network technologies, including structured wiring, home broadband and wireless as well as home theater. The annual SDM survey found, however, the number of dealer firms working this area hasnâ€™t increased.

In ways similar to home security, some of the largest dealer firms have relationship agreements with new homebuilders for structured wiring and low-volt home networking. Of course, home systems beyond security are not every security dealerâ€™s cup of tea.

While most spending by type of technology has remained constant, there is growth 1999-2000 in areas such as access controls, CCTV, integrated systems and intercoms.

Further, the slowing U.S. economy could have significant impact here. Already the sale of home personal computers fell off the table during the close of 2001. Home PCs are the heart of many home automation designs. Some observers now feel that home broadband may also be more hype than real business â€” at least at this time.

According to the SDM survey, when asked to name top factors driving security sales for the next three year, dealers consistently list â€œeconomic conditionsâ€ in the top spot, following by â€œcrime.â€ This year, dealers ranked â€œresidential building activityâ€ as the third most important factor driving security sales while placing â€œsales and marketingâ€ in fourth place.

The SDM survey also provides valuable insight into the top challenges that dealers believe they face.

Reflecting the tight labor market generally, dealers for the second straight year ranked â€œfinding and retaining employeesâ€ as their top challenge. And, for the first time in a decade, dealers ranked â€œkeeping current with technologyâ€ among the top four challenges.

In survey follow-up interviews, dealers report that their product and service offerings now are much more dependent on computer and communications technologies as well as niche technologies such as CCTV, smart cards and biometrics. So it is natural for dealers to see â€œkeeping currentâ€ so much more important.

About the SDM Survey of Business Activity

To determine total revenue and growth, the SDM survey employs a consistent formula that accommodates large firm revenues and growth projections without destabilizing the entire respondent base with regard to the vast number of small firms.

The SDM survey, with breakdowns by type, size and location of the dealer firm, is for sale at $150 per copy. Contact: The Security Group, SDM Year 2001 Profile Research, BNP Media, 1050 IL Route 83, Suite 200, Bensenville, IL 60106 or email SDM@bnpmedia.com and mention the Year 2001 SDM Industry Profile.