Release the Kraken? Forget It Release the Broadband Residential Gateway! 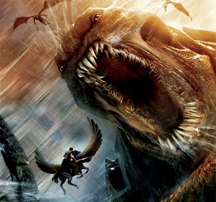 The Kraken is nothing compared to the Clash of the Titans over broadband residential gateways. Advances and who owns the gateway will influence the future of smartHOME and home security businesses. Photo courtesy of Warner Bros. Entertainment Inc. and Legendary Pictures

This is the real Clash of the Titans: men fighting kings fighting gods in the truest and bloodiest sense of the digital home battleground.

From Ashville to Grand Rapids, from Portland to Sarasota, American cities are fighting tooth and terabyte to be the next Google higher-speed broadband experiment. On April Fool’s Day, Google turned into Topeka, Kan.


In a just-conducted federal appeals court battle royal, Comcast, the cable and high speed Internet giant that bought NBC Universal, lock-stock-and-Leno, knocked out the Federal Communications Commission (FCC) and its so-called “net neutrality” plans. The court ruled the kings of the FCC do not have the authority to “reign” in the commercial cable gods. Comcast wants to limit â€” read that as charge more â€” certain larger amounts of high-speed Internet traffic over its own system and make sure other companies wishing to push mostly video content through Comcast's pipelines cannot.


For smartHOME and residential security professionals whose memory goes back farther than Facebook, they may recall the Clash of the Titans pre-quel. In 1995-96 when Congress was considering its first major overhaul of United States telecommunications law in nearly 62 years by amending the Communications Act of 1934, the Krakens at that time were the Regional Bell Operating Companies and their monopoly powers to bundle services into homes. Security’s David won with a protective exception.
How quaint.


Today, providers as diverse as telephone companies, cable operators, satellite dish companies, Internet search firms, computer software and router operations and more are realizing that the broadband residential gateway will be the means through which they can extend their networks and services into the digital home and, in the process, gain control of the distribution of data, voice and video.
No doubt, more broadband-enabled homes and faster networks will create additional opportunities for smartHOME and residential security professionals.


For most homeowners, a residential gateway is a home networking device, used as a gateway to connect devices to the Internet. It is an umbrella term, used to cover multi-function networking computer appliances used in homes, which may combine a DSL or cable modem, a network switch, providing local area network (LAN) switching, a router, and sometimes a wireless access point. In the past, such functions were provided by separate devices, but by technological convergence, they have often merged into a single device.


When it comes to video content or security video, ultra high-speed broadband networks are a next step. Google announced in February, for example, that it plans to test broadband networks in one or more trial locations in the United States, claiming that the networks will deliver Internet speeds more than 100 times faster than what most Americans are using today.


But it may be managed home automation that is the sweet spot for smartHOME and security installers. More than one million systems are expected to be installed in 2012. That figure, which represents a tripling of the 2008 market, is forecast to nearly double again in 2014, according to ABI Research.


One significant element of managed home automation packages is security. Traditional security service alarm service providers as well as telcos and cable broadband service providers are now entering the market for managed home monitoring and automation services. "Managed home security usually represents good value for the consumer," said ABI Research practice director Sam Lucero. "It's something of a 'plain vanilla' offering, but it is packaged by the service provider in a way that is relatively easy to deliver. Standalone home automation and security systems pose a significant challenge to consumers, in both cost and complexity. When home automation functionality is included in an overall security alarm package, it is more seamless and less expensive for the consumer to acquire."


Further, mobile broadband is an exciting new frontier for consumer electronics, bringing a whole new world of connectivity, community and creativity to users. Take for instance smartphones and the iPhone. In 2014, almost half of mobile broadband net subscriber additions will be on devices other than mobile phones. Phil Kendall of Strategy Analytics Global Wireless Practice, added, "Devices offering a compelling user experience over LTE and WiMAX will be crucial for growth, although in five years, 3G will still account for two-thirds of active mobile broadband subscribers."


Traditional broadband is well established, according to a FCC survey.

At the same time, home broadband speed continues to increase, by 28 percent compared to last year, albeit at a slower rate than in 2008, according to In-Stat research firm. "Today's broadband service subscriber is becoming increasingly aware of the capabilities, and the limitations, of their broadband connection," said analyst Mike Paxton.

Ironically, according to FCC figures, ala carte brings in more revenue than bundled services. In 2009, the average reported bill was $40.68 per month, falling to $37.70 for bundle subscribers and rising to $46.25 for standalone buyers. Dial-up access costs an average reported rate of $22.98. Seventy percent of users reported buying bundled services, but only half of those were able to identify the cost of the Internet service portion of the package.

In the city fight over Google’s fiber infrastructure, more than 1,100 United States communities applied to become Google's test site. All the excitement around Google's fiber optics experiment speaks to the appetite for faster broadband as Americans come to rely on the Internet as their primary source of communication and entertainment. "Our goal is to experiment with new ways to help make Internet access better and faster for everyone," Minnie Ingersoll, product manager on Google's alternative access team, reported in an e-mail. "We want to see what developers and consumers can do with ultrahigh speeds, like creating new bandwidth-intensive 'killer apps' and services, or other uses we can't yet imagine." Google's one-gigabit-per-second network will raise the bar for broadband.

Give Them a HAN: Broadband Home Management Mergers Increase

Web, TV Convergence: Bring the ‘Rivers and Streams’ Together