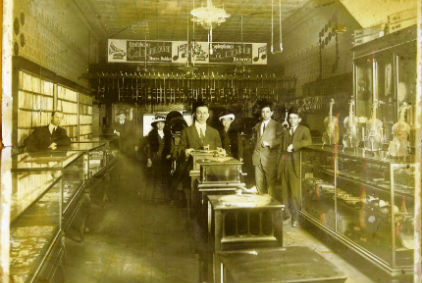 1902.  One hundred and ten years ago. It is stunning to think about all that has changed and advanced in the world in over a century. Next think about how much has changed and advanced within business and technology in that same time span. This really puts into context the amazing history of the Schireson brothers and their upstart company, which would evolve into what we know today as Volutone Distributing. Brothers Jack and Nathan Schireson opened the doors of the original Schireson Brothers on South Broadway Street in Los Angeles in 1902. Their company evolved into a business that would survive and thrive in the American economy of the 20th century, an economy that provided every windfall and catastrophe imaginable. Remarkably the Schireson brothers maintained their presence in a field that was barely in existence at the turn of the century, but is a part of our daily lives almost constantly today — the field of technology. Technologies so advanced and deeply embedded within our daily lives the possibilities of which neither brother could have imagined. Yet they always saw a future in adapting and staying upon the edge of it.

According to Jack Schireson’s son Stanley, his uncle Nathan was an “inventor” and a true mechanic of violins.  His curiosity and ingenuity led to a chance meeting with a gentleman who had created a magnetic pick-up and Nathan was instrumental in the creation of his own electric guitars. The magnetic pick up was slid under the steel strings of a guitar creating music with both volume and tone, hence the inception of the operating name “Volutone.” His brother Jack was a born salesman and businessman and under his leadership Schireson Brothers grew in the sale of musical instruments to the public. Stanley Schireson, succeeded his father Jack and continued the family tradition of personal and friendly customer service before there ever was such a term.  As the transistor revolutionized the electronics business in the 1950’s Stanley also had ambitions and his vision was to grow the company from retail to distribution.

In 1957 a Japanese gentleman came into Schireson Brothers and patiently waited to catch Stanley’s eye and ear.  He asked Stanley if he would be willing to look at and also listen to the product he had to offer.  In his briefcase he had two radios: an eight transistor and a six transistor.  Stanley had never seen anything so small and compact that was able to deliver such good sound. Over a handshake with Mr. Akio Morita, president of Sony, it was agreed that Schireson Brothers would become a distributor. Since this was still fairly soon after the second World War, marketing this Japanese product to some people could be a sensitive issue. Stanley explained to potential customers who needed convincing that Sony stood for “Standard Oil of New York” and the rest, as they say, is history.

As amazing as the Schireson brothers and their story of longevity, it is equally amazing that this family business has passed through four generations to remain a family-owned and operated company still to this day. Gary Schireson, son of Stanley, and Neville Hansen, son-in-law of Stanley, became the third generation of the Schireson Brothers.  Much like their predecessors had done Gary and Neville focused on maintaining the business while challenged with growth, development and expansion of electronic sales through the distribution channel. With the efforts of their dedication and hard work Volutone transitioned from a retail company to the distribution company it is today.

Currently under the leadership of Trevor Hansen, the son of Neville and grandson of Stanley Schireson, Volutone continues to be known for its century-old customer service, competitive pricing and the most knowledgeable staff in the industry. Currently as a PowerHouse Alliance Member, distributing industry leading commercial and residential world-class audio/video, security, home automation and home networking products.

Volutone Distributing Company would like to thank its loyal customers and vendors for their continued support as we celebrate 110 years in business!