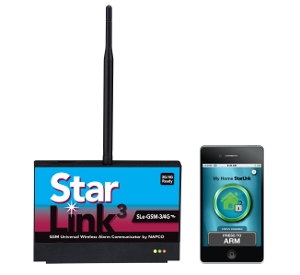 Napco Security Technologies Inc., Amityville, N.Y. announced that its Napco's StarLink™ Future-Proof Universal Radio Series – new SLE-GSM3/4G model 3G/4G Network-Ready Radio is available in distribution. The Napco SLE-GSM Series features an upgradable communication module so it can be upgraded anytime there are progressions in cell networks, from 2G to 5G to xxG, down the road, without ever replacing the radio.

Like its predecessor, the StarLink 3 (Model: SLE-GSM3/4G) still features universal full primary or backup event reporting from any panel brand, virtually anywhere, to any central station and requires no special equipment. Also with Napco’s StarLink App for Apple/Droids, remote-enabled accounts can arm/disarm their system from their smartphones or tablets anywhere they are and get bi-directional confirmation on-the-spot. Lastly, StarLink’s Takeover Feature enables it to capture any panel’s existing CS phone number, so you can reroute/redirect it to another central station.

SLE-GSM3/4G includes an AT&T Sim card for use with AT&T direct service “AT&T PLUS” and benefits from its large service footprint (It comes preactivated and has no radio activation fee).

Napco’s upgradable StarLink 2 SLE-GSM is still also available thru distribution, and uses T-Mobile™ Service, as T-Mobile has stated that they are “maintaining their 2G network for the foreseeable future…having made a substantial 2G Machine-to-Machine customer base.”