The Big Security Deals of 2018: What They Tell Us

Who’s buying, who’s selling and what’s with all of these unusual buyers?

Last year was a big one for security industry mergers and acquisitions. SDM counted at least seven major deals involving security dealers or integrators — as either buyers or sellers. We asked financial specialists in this area what motivated these deals and what they mean for the industry. We were particularly curious about why so many new types of companies are investing so heavily in the industry — from guard company and electronic security integrator Securitas to auto club franchisee AAA Northern California, Nevada and Utah (AAA NCNU).

A trend several years ago was the arrival of private equity firms as investors in security dealers and integrators. However, here’s the thing about private equity: These firms only want to hold their investments for five years or so. They want to get in and get out, often by selling to another private equity firm or executing an initial public offering, and hopefully making a nice return in the process.

The upshot is that those private equity firms that invested in the security industry several years ago are now looking to get out.

Perhaps the highest profile deal of that kind in 2018 was the initial public offering of ADT. The security dealer giant had been owned by Apollo Global Management since 2016 and as David Stang, president of Chicago-based Stang Capital Advisory LLC, explains, the company was so big that only one or two private equity firms could afford to buy it.

“The main way to exit was to do an IPO,” Stang observes.

As Henry Edmonds, founder and president of St. Louis-based The Edmonds Group LLC, explains, however, Apollo retained a controlling share of ADT, who also notes that ADT’s stock value has dropped since the IPO — a situation Edmonds says is the result of Wall Street becoming disappointed with certain aspects of the deal.

The rise in popularity of do-it-yourself security systems has brought some large new players into the market over the past few years — including Amazon, which bought video doorbell manufacturer Ring, and Hellman Friedman, one of the world’s largest private equity firms, which bought DIY security system manufacturer SimpliSafe. Both transactions occurred in 2018 and as Ron Stennes of Sierra Consulting explains, both sellers received strong values for their companies.

“One way to think about that market segment would be to say that professionally installed and monitored security systems have always been focused on owner-occupied households,” Mack says. “The newer technology is applicable to a huge market of people who previously didn’t have ready access to it.”

The buyers of companies such as Ring and SimpliSafe “see a big category with an economic model that’s reasonably attractive — selling to consumers and in many cases getting RMR,” he describes.

Edmonds is somewhat less enthusiastic. He calls SimpliSafe a “meaningful competitor” that serves a customer that was not one that the “traditional industry served particularly well.” He adds, though, that he believes the DIY segment represents only a “single-digit” percentage of the security market and sees Amazon’s focus “on facilitating package delivery” and obtaining data to understand customers better, rather than on providing security. He doesn’t see selling security systems as a “good fit” for Amazon but notes that “having a system in the home does provide information that helps Amazon understand customers better.”

“Once ADT became public, the team didn’t do a great job of communicating with Wall Street,” says Edmonds. “Wall Street doesn’t like surprises and there were a number of surprises. Over the last year, ADT has performed well, doing the right things, but because communication with Wall Street wasn’t perfect, they have suffered some erosion,” he says.

Because ADT’s stock value has declined, Edmonds believes Apollo’s most likely option for exiting the business will be to sell to a telephone company or conglomerate. As broadband providers, telecom companies are looking for ways of further monetizing their broadband networks, and some of the companies view home control and security as a good way of doing that.

“Convergint was owned by private equity [firm] KRG for a number of years and grew dramatically internally and through acquisition,” Stang observes. “When it was time for KRG to exit, they found a larger private equity firm” to buy Convergint.

As Mack notes, Ares Management “sees room for Convergint to continue to grow.”

A major part of ongoing growth strategy for both ADT and Convergint is to acquire other dealers and integrators.

Indeed, acquisitions have been so important to ADT that, according to Ron Stennes, owner of Buckley, Wash.-based Sierra Consulting, “Stockholders want to see recurring monthly revenue. … ADT has essentially been buying RMR for years.”

Other sources note another motivation for ADT’s acquisition strategy. At one time, ADT had both a residential and commercial division but when the company was spun off from Tyco several years ago, Tyco retained most of the commercial side of the business. Over the last year or so, the company’s acquisitions, in large part, have been commercially focused. The largest of these deals in 2018 was the acquisition of Red Hawk Fire & Security, a company with strong commercial operations.

Sources identified seven big deals of 2018 involving security dealers/integrators as either buyers or sellers, along with two major deals involving manufacturers of do-it-yourself (DIY) products. This table summarizes those deals and includes links to SDM’s coverage of each deal at the time it was announced.

Security integrators that target the commercial side of the market may have strong appeal to other buyers, as well.

One reason is that commercial accounts have lower creation costs and are less susceptible to disintermediation by internet and DIY [do-it-yourself] models, comments Will Schmidt, managing director of the Security Lending Group at Chevy Chase, Md.-based CapitalSource. (See sidebar, “New Players Enter the DIY Market” on page 47.)

While ADT and Convergint may be the highest-profile industry consolidators, sources also note several regional companies that are active on the acquisition front. Mark Melendes, managing director and head of the security industry group for Toronto-based CIBC Bank US, points to ADS Security of Nashville, Tenn.; Per Mar Security Services, Davenport, Iowa; Bates Security of Lexington, Ky. (SDM’s Dealer of the Year; www.SDMmag.com/sdm-2018-dealer-of-the-year-bates-security) and B Safe Security of Wilmington, Del., as regional consolidators. Barry Epstein, president of Dallas-based Vertex Capital, adds Lancaster, Pa.-based Select Security and Pittsburgh-based Vector Security to the list.

Although no individual deal of theirs was large enough to make our top deal list, the combined value of acquisitions that these companies have made is substantial.

Perhaps the most interesting trend on the mergers and acquisitions (M&A) front for 2018 was a rise in non-traditional buyers. Non-traditional players that invested in security companies in 2018 included:

Best Buy’s decision to purchase Great Call was driven by the retailer’s desire to “differentiate themselves with consumers and extend their brand beyond products you can buy in a retail environment,” Schmidt explains.

The ability to earn RMR also was likely an important factor in the decision, as both PERS and the elderly cellphone service generate RMR.

BCE’s decision to buy the Canadian operations of AlarmForce Industries, meanwhile, was driven, in part, by a desire to follow the lead of cable and broadband provider Comcast in the smart home market, Edmonds describes.

Although some phone companies in the 1990s purchased security dealers and later sold those operations, the smart home market has seen substantial change in that time, as equipment is considerably more affordable than it was 20 years ago.

This time around, Edmonds says, “It seems like Comcast made a strong enough commitment [and] everything they say suggests they’re in it for the long haul.”

Securitas’ decision to purchase the Kratos unit also was driven by changes in technology, Mack observes.

“[Securitas and other guard companies] believe they should be able to go to their larger customers and bring a full-service solution,” Mack explains.

Perhaps the most surprising company to purchase a security company in 2018 was AAA Northern California, Nevada and Utah. However, according to R. Anthony Smith, president of Tujunga, Calif.-based Security Funding Associates, who consulted with the auto club on the deal, it was a carefully considered decision.

“They saw that they could be losing significant profits and revenues through changes in the auto industry,” Smith explains. “They were looking for a cash flow-focused business with recurring revenues like insurance and they discovered the alarm industry.”

Already cars are beginning to communicate with each other, thus avoiding accidents, and self-driving cars are about 10 years away — all of which could reduce insurance revenues, Smith says. Offering security services “fits like a glove” with AAA’s roadside protection business, he notes.

Stang sees other benefits for AAA, as well. Offering alarm systems will give them daily interaction with customers, and he sees the line between auto and home security beginning to blur. Those who use AAA for home security might also be willing to allow AAA to monitor their car, especially if doing so could decrease their insurance rates, he argues.

In general, the security dealer/integrator M&A trends observed this year would seem to bode well for the future. Among the new types of buyers, it would not be surprising to see other guard services, big box retailers, broadband providers, guard companies or insurance companies moving into the security business through acquisitions.

M&A Activity in the Security Industry 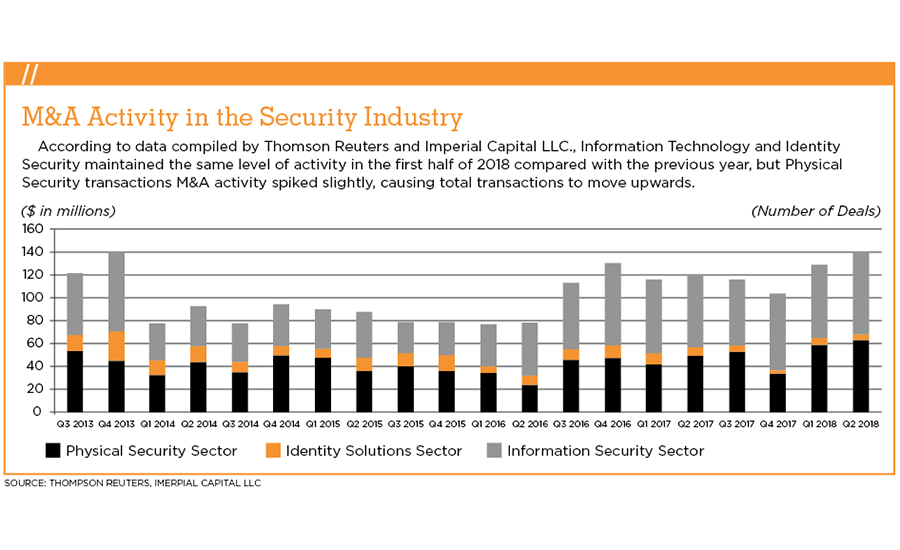 According to data compiled by Thomson Reuters and Imperial Capital LLC, the first half of 2018 was slightly more active than that of the comparable period in the prior year, with a total of 270 transactions.

Information Technology and Identity Security maintained the same level of activity in the first half of 2018 compared with the previous year, but Physical Security transactions M&A activity spiked slightly, causing total transactions to move upwards.

One possible concern on the M&A front is that some potential investors may see increased risk in the rise of DIY systems. But others believe DIY will continue to be a small niche in the overall market, and industry consolidators seem poised to continue with acquisitions into 2019 and beyond.