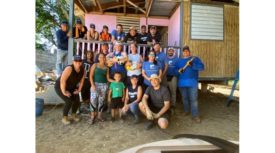 Mission 500, the non-profit supported by the security industry and dedicated to serving the needs of children and communities in crisis, completed its second trip to Puerto Rico to assist families still struggling from the devastating damage of Hurricane Maria.

CEDIA Names 2013 Volunteers of the Year

CEDIA Names 2012 Volunteers of the Year