Back to ‘Normal’ at Successful ISC West 2022

Cloud, cloud, cloud — plus AI and deep learning — were some of the hottest topics at ISC West, held March 22-25 in Las Vegas. While a much-delayed in-person event was held last summer for the first time since the pandemic began, for many this was the first “normal” feeling show in a couple of years. For one thing, masks were not required — though wrist bands confirming either fully vaccinated status or negative COVID-19 tests did give peace of mind that the crowded halls were as safe as possible.

There were high hopes for a busy show even before ISC West. According to Mary Beth Shaughnessy, event director of ISC Security Events, 2022 pre-registration levels in February already doubled the attendance of 2021.

And, with a final headcount of around 20,000 attendees, the halls were crowded. At LenelS2, Product Manager Mike Green reported watching a solid stream of attendees pour through their booth — located in front of the main doors — on day one for up to 15 minutes without a break. Throughout the hall there was a feeling of excitement and optimism, and reports of good traffic and conversations.

Of course one of the highlights for many attendees — particularly those who had stayed away until now — was seeing the latest technology in action. There was plenty to see.

New to ISC West this year was The Bridge, a central spot on the show floor that held multiple award ceremonies, like the New Products and Solutions Awards, formerly known as the New Products Showcase Awards. Featuring 72 products across 25 categories, the spotlighted technology was an example of the industry’s entrepreneurial spirt. ASSA ABLOY was awarded the SIA NPS Merit Award; Allegion was awarded the Best New Product honor for its LCN 6400 COMPACT Series Operators product, submitted in the Access Control Software, Hardwire, Devices & Peripherals — Wired category. Newcomer Hakimo was awarded the prestigious Judge’s Choice Award for the Hakimo Alarm Monitoring 2.0 product, submitted in the Commercial Monitoring Solutions category.

The cloud seemed to be the dominant technology of the day, with many different products and solutions showcasing cloud-based solutions.

“The cloud was coming before the pandemic; and while we were in seclusion our main focus was to get into the cloud,” Green said of his company’s new access control as a service offerings. Elements is a unified access and video management solution built specifically for the cloud. Whereas the company’s flagship access control product, OnGuard, will have a cloud-based option towards the end of the year. 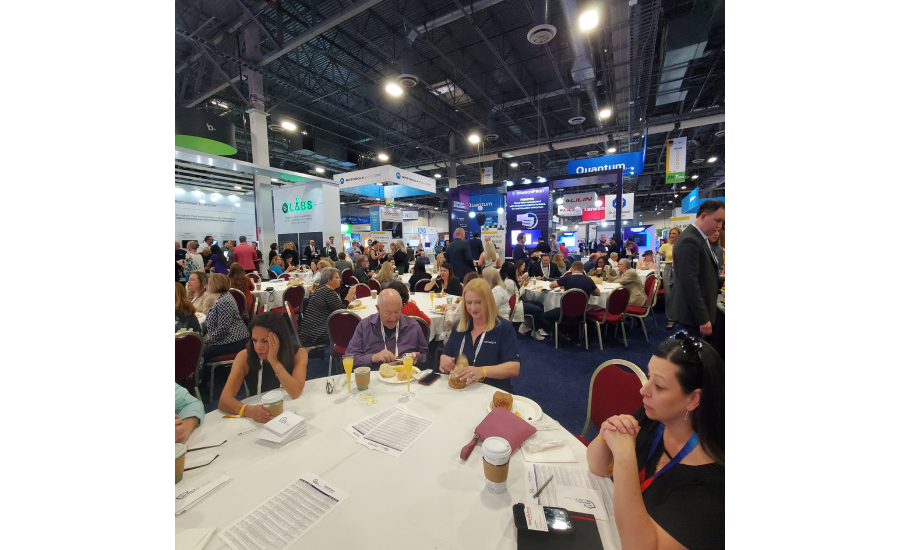 The Women in Security Forum held its annual breakfast and keynote on Friday morning on the show floor.

“What is funny about physical security is you can’t really have cloud the way that Salesforce or Dropbox do,” said Sanjay Challa, chief product officer. “You have to have something physically on premise. … The model we are aiming towards is being a transition leader to helping businesses that have a heavy footprint that won’t push all that video up to the cloud.

“Our cloud offering gives people flexibility and affordability and will allow people to do more with their video data, such as giving it to other teams and being able to monitor and manage and configure systems.”

At the annual Axis press breakfast founder, Martin Gren and vice president of the Americas, Fredrik Nilsson, made a game of which technology was more important: cloud or edge analytics and deep learning. Dressed in racing gear, they each represented a “team.” In the end the race was a tie: “As with all good things the answer is really the combination of edge + cloud is the winner,” Gren said.

Edge and cloud also featured in products from Genetec, with its new Streamvault Edge product and Cloudrunner LPR.

At Eagle Eye Networks, President Ken Francis showed off the company’s new “Natural Language” search function. “When you think about searching, having the ability to talk or type into a Google window is key. If you can get video surveillance to the point where it uses natural language it saves tons of time.”

Not all was normal and rosy, however. While the products on display were exciting and new, several manufacturers noted issues with supply chain and rising costs, along with the need to mitigate both.

“Supply chain has been tough,” said HID’s senior director, public relations and corporate communications, Matt Winn. “Chip shortages are causing issues in terms of fulfilling orders in a timely manner, which has been a frustration for our customer base and us as well. We have a global team spending all their time sourcing chips. We are trying to be as transparent as possible with our customers. We have absorbed a lot of cost.

“It is a macro issue, but it is hitting us and our customers. We are hoping it is short term and not long term.”

Axis also addressed this at the press event.

“In general it is getting better, slowly,” Nilsson said. “There is light at the end of the tunnel. We have become more skilled at the model. We noticed in the middle of last year our spend efforts in reassigning products with new components. We spent a lot time in Q4 to mitigate that. But now it is better because of those redesigns. Memory chip sets are also decreasing in price, so that is a positive sign. But we won’t be out of the woods for another quarter or two.” 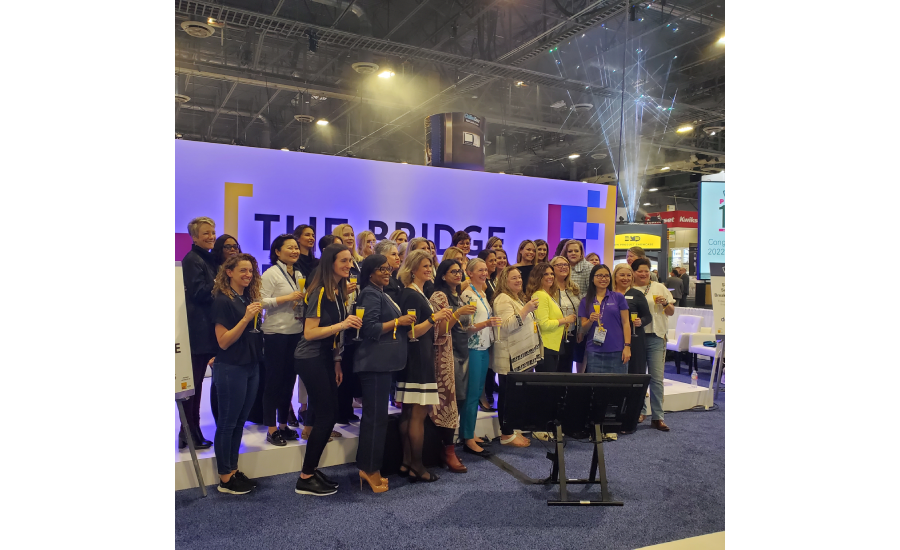 Members of the inaugural WISF Power 100 gather for a champagne toast at the Women in Security Forum breakfast.

During the SIA press briefing, SIA gave updates on legislation affecting the industry, like facial recognition bans and the Build Back Better bill, and introduced the new Proptech advisory board, chaired by Lee Odess of group337.

SIA also discussed findings from its latest Security Market Index, which shows a growing confidence in industry momentum. The SMI of January/February was 72, up from 47 in December. An index above 50 indicates that conditions within the industry are largely positive and that security industry professionals are predominantly confident in their business outlooks.

And, judging by the findings in the SMI, security professionals are approaching “normal.” Seventy-nine percent of industry respondents rated current business conditions as “good” or “excellent”; 67 percent of security professionals reported increases in marketing spending and 90 percent said they believe business conditions will be “much” or “a little” better within the next three months.

Off the show floor there were plenty of other signs of returning to “normal” — particularly in the parties, cocktail receptions and events that were curtailed in previous shows. The Market Leaders Reception was back at Drais; Genetec celebrated its 25th anniversary with a party at Palazzo pool deck; numerous companies hosted cocktail receptions; and the Women in Security Forum celebrated it’s inaugural Power 100 at its annual breakfast Friday morning.

All in all, most exhibitors and attendees seemed to agree the event was a success.

“It truly was amazing to see all our attendees, exhibitors, and partners in person again,” Shaughnessy said. “ Clearly the security and public safety industry is ready to get back to face-to-face meetings as the show floor was packed and the electrifying energy consistently included positive messages throughout the week such as ‘exceeded our expectations,’ ‘feels like 2019,’ and ‘ISC West is back.’”

As the Editor-in-Chief of SDM, Karyn Hodgson is responsible for the overall editorial direction of the magazine, its supplements, e-newsletters and website. She works with the SDM editorial staff to develop content that helps security dealers and systems integrators operate successful businesses. Karyn represents SDM at trade shows and conferences, and directs exclusive research studies such as the SDM Industry Forecast. She also manages SDM’s Dealer of the Year and Systems Integrator of the Year Award programs. Karyn has an MSJ in Journalism (magazine publishing) degree from Northwestern University, and more than 25 years’ experience writing for and about the security industry. Contact Karyn with article ideas.