Also known as Video Monitoring-as-a-Service (VMaaS) or remote guarding, the idea is to deter criminals via voice-down. Maybe video can even replace a traditional alarm system.

When cars were getting broken into at a local food pantry, those in charge contacted Solana Beach, Calif.-based Pioneer Security Services about installing video surveillance cameras in the parking lot.

But Howard Feldman, president of the local security dealer business, told them, “I can sell you cameras, but they won’t solve the problem. After a car is broken into, the next morning you’ll look at grainy video, and law enforcement . . . will give you little satisfaction and you’ll say you were ripped off two times because I charged you for a useless camera. You need to interrupt bad behavior in real time.”

“How do I do that?” the potential customer asked.

That was a couple of years ago. Pioneer now offers what some call proactive video monitoring and others call remote guarding or Video-Monitoring-as-a-Service (VMaas). The company buys the services on a wholesale basis from four different central stations.

What makes the service so powerful is that operators use voice-down capability to alert intruders there are eyes on them, Feldman explains.

Pioneer charges about $150 per camera each month, which includes maintenance on the cameras. The cameras are leased, which means it might take six months to break even on the installation. Most of the central stations charge less than $50 a month per camera, although one charges $65 to $70.

Why four central stations? Feldman has been keeping tabs on operator response time in order to identify the central station with the best performance.

Multiple sources interviewed for this story agree on one thing: Existing video accounts without proactive video monitoring are great prospects for the service.

Selling to them is much easier than selling proactive video as part of a new system, observes Howard Feldman of Pioneer Security Services.

Several experts cautioned, though, that dealers may need to reposition existing cameras when upgrading a customer to proactive video monitoring.

“As you use cameras with video analytics, placement is critical,” comments Justin Wilmas of Netwatch. “A camera may be great for surveillance, but it may not be in the right spot for analytics to work.”

For example, Cloudastructure offers health monitoring as part of its service, alerting customers when cameras go down. The company, as well as some others, also offers cloud recording of video alarm events and storage for a certain time period.

Eagle Eye Networks adds value to its offering by providing continuous cloud recording. Eagle Eye President Ken Francis explains this can enhance proactive video services by enabling operators and the end user to access recorded video more quickly in comparison to pulling it from cameras located at the customer premises.

What makes proactive video monitoring different from traditional video verification? With video verification, cameras sensing motion send clips to the central station for an operator to view in order to determine whether an actual intruder is present or if a false alarm has been tripped by an animal, tree blowing in the wind or some other anomaly. If an intruder is present, the operator dispatches police; and while verified alarms get faster response than non-verified alarms, police may nevertheless arrive well after a crime has been committed.

Perhaps the most important aspect of proactive video monitoring, though, is the ability to issue a verbal warning to intruders.

Emergency24, a wholesale central station based in Des Plaines, Ill., offers a service from CHeKT that uses a bridge box installed at the customer site that connects to virtually any camera and continuously stores the most recent 10 seconds of video seen by the camera. When an alarm is detected, the operator sees not only what happened after the alert was generated but also what happened right before.

As Kevin Lehan, director of national sales and marketing for Emergency24 explains, the operator either calls police or, depending on the situation, plays a prerecorded message urging the intruder to leave. The latter choice might be appropriate if, for example, someone is using a pool when it is closed.

End users may be able to replace human guards with the offering, Lehan notes.

As an alternative to prerecorded messages, some central stations have operators use voice-down capability to speak to intruders.

For example, an operator can verbalize, “You in the blue shirt,” Wilmas explains.

“When audio voice-down is customized to that level, it really makes an impact on the person and what they’re doing,” he notes. Intruders in that situation often will leave before a crime is committed, he adds.

Union, N.J.-based Affiliated Monitoring, a nationwide monitoring center, offers proactive video monitoring solutions including what it calls “customized talk-down.” Anthony Iannone, video services director for the company, highlights an important benefit of the offering: “You get a higher priority response from law enforcement.” 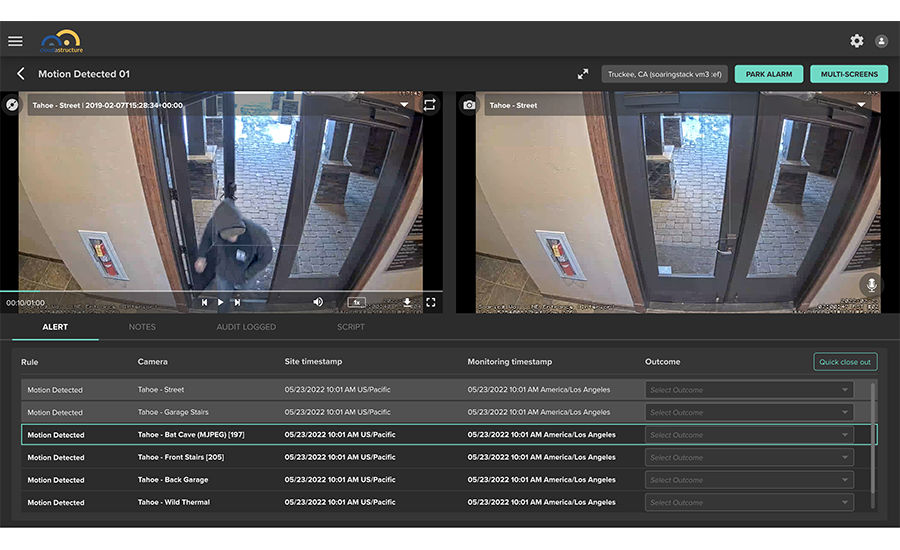 Remote guarding software from Cloudastructure includes voice-down capability so central station operators can warn intruders they are on camera. // IMAGE COURTESY OF CLOUDASTRUCTURE

Security dealers wanting to offer proactive video monitoring may make the same choice that Pioneer Security Services did and use a wholesale central station to handle the monitoring. Alternatively, dealers that have their own central stations may opt to offer the service using their own equipment and operators.

In either case, there are a range of decisions that must be made. For example, some developers of proactive video monitoring technology are selective about the central stations they use and may essentially only offer their technology as a wholesale service.

Cloudastructure, a Miami-based developer of remote guarding technology, currently has an agreement with just one wholesale monitoring company to support its service, although the company wants to establish more monitoring agreements, according to Lauren O’Brien, vice president of sales and marketing.

For example, Cloudastructure offers health monitoring as part of its service, alerting customers when cameras go down. The company, as well as some others, also offers cloud recording of video alarm events and storage for a certain time period.

Eagle Eye Networks adds value to its offering by providing continuous cloud recording. Eagle Eye President Ken Francis explains this can enhance proactive video services by enabling operators and the end user to access recorded video more quickly in comparison to pulling it from cameras located at the customer premises.


Netwatch North America sees central station operators, known as “intervention specialists,” as a critical element of the company’s value proposition. Accordingly, those wanting to use Netwatch technology must use Netwatch for monitoring. 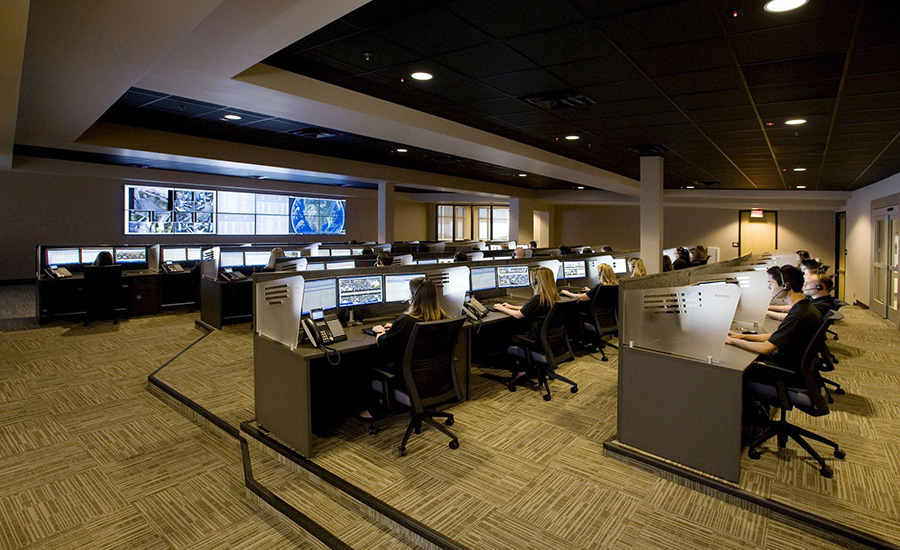 As Dice Co-President Avi Lupo explains, “We see cameras as sensors.” Dealers can assign a customer’s cameras to different zones that can be armed or disarmed separately. In addition, the system can pull up all cameras in a zone when one camera in the zone is tripped.

Some central stations may opt to augment the capabilities of their central station automation systems by interfacing with additional technology designed specifically for video that may add capabilities such as voice-down or AI-based intelligent queueing.

Both Tampa, Fla.-based Immix and Austin, Texas-based Eagle Eye Networks offer technology designed to integrate with the most popular central station automation systems and give central station operators consistent video control, regardless of which company manufactured the end user’s cameras or camera system.

“We normalize video,” explains Immix CEO Chris Brown, who likens the capability to a universal remote control that enables channel up-and-down functionality to work consistently with any device.

It’s also worth noting that using existing central station automation software or integrating with it aren’t the only options. Some proactive video technology developers — including Cloudastructure and Netwatch — developed that automation software underlying their offerings.

Central stations adopting proactive video monitoring technology also will want to consider whether to use a cloud-based or on-premises approach. Some technology developers offer both options, while others offer only one or the other.

Proper scripting can help operators perform their tasks most efficiently and effectively.

Not Your Father’s Remote Guard Service

Traditionally, the security industry used the term “remote guard tours” for a service that called for central station operators to view cameras at a customer location according to a schedule, similar to how a live guard might walk around the property.

But some people in the security industry see that type of service on the wane now that proactive video monitoring, AI and intelligent queueing have made it possible for the central station to get immediate notification of intruders virtually anywhere the cameras can see.

Accordingly, some people now use the term “remote guarding” to be synonymous with “proactive video monitoring.”

As Daniel Forrest, CEO of Houston-based central station EyeForce, puts it, “Every camera is a guard’s eye.”

Immix, meanwhile, has its own unique nomenclature for proactive video monitoring, calling it “remote detection and response.”

Ask security professionals involved with proactive video whether it can replace a traditional alarm system and a considerable number of them will answer affirmatively.

“We use the video system as an alarm system,” says Wilmas of Netwatch. “You arm it when you want us to monitor it.”

Not only can proactive video monitoring replace a traditional alarm, it may provide better performance, according to Anthony Novotne, marketing manager for Falls Church, Va.-based CheckVideo, a provider of cloud-based video analytics.

“Traditional security systems typically catch the crime after it has already occurred,” Novotne observes. In contrast, proactive video monitoring “can monitor every aspect of your facility, lower false alarms and verify intruders in real time.”