In its 75th Year, SDA Security Looks to the Futureand that includes the Internet 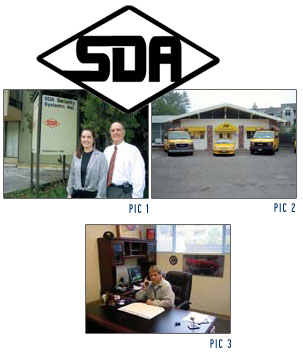 Pic 3 - Roy Cats, president of Fire Protection Inc., Everett, had been a sheriff's policeman in the Seattle area for 10 years.

Despite celebrating the business' 75th year, those at SDA Security Systems Inc., San Diego, are looking ahead to the future of the industry, instead of looking at the past.

"We're into the third big phase in our industry, which is the transition to the Internet communications world, which we've been a leader in," said SDA's president Rod Eales, son of the company's founder, Harold Eales.

SDA Security is upgrading its central station software to take advantage of all the new applications, such as video monitoring, that it allows. "So we see obviously the Internet vehicle of communications as critical to the 21st century alarm installation, servicing and monitoring," Eales noted.

"The next big sale in the monitoring area is the capability for the customer to have hands-on access to his data via the Internet by browsing and get it right down to the contact or to the device that he can control and see," he predicts.

Eales, who is celebrating his 40th year with the company, traces his involvement with alarm technology from watching the old ticker tape and monitoring the McCullough loop signals through multiplexing circuitry to digital communications over telephone networks and now the Internet.

"It's been changing in transmission and technology every 15 years," he insists. "In the next few years, we'll geometrically expand our technical capability to communicate over the Internet."

His father Harold started the business in 1930 as San Diego Burglar Alarm Co. by working as a produce clerk in a local grocery store during the day and installing and monitoring alarm systems at night. Harold's first burglar alarms were made from the brake drums of automobiles and were so loud they "made your hair stand on end," he maintained.

By 1948, the company had hundreds of miles of wire running all over downtown San Diego and approximately 450 customers. Eales' technicians could install three types of alarms and adapted each to fit the needs of individual stores.

Despite technological changes, Rod Eales declared that the essence of the business, which now is approximately 80 percent commercial, has not really changed.

"Trying to satisfy the customer's needsâ€¦that's the name of the game," he emphasized. "That has to be done with people. And we've been fortunate and had very good [employees]."

Citing the growth in the security industry since Sept. 11, Shandon Harbour, director of sales and operations and the third generation of the family in the business, pointed out, "Life protection and safety are at the top of everybody's list. All of those concerns are at the forefront of the customer's mind these days. How are you going to protect me?"

In connection with that, SDA has a UL certificate for Department of Defense facility clearance. "We've seen a tremendous increase in our classified work these past two years," Eales added.

"It's been a fun run; it's not over yet," Eales concluded.