When You Need to Look Good 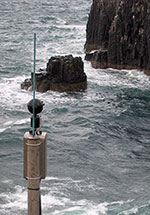 Moondance, Extreme CCTV's ruggedized PTZ camera, is suited for outdoor locations such as coastlines.
The obvious benefit of a pan-tilt-zoom (PTZ) camera is that it allows users more control compared with a fixed camera, such as panning or zooming in on an incident of interest.

"Everybody wants PTZ, but that main thing is the price," says Tae Kim, system administration for KT&C USA, a Los Angeles-based manufacturer of PTZ cameras.

There is an obvious price difference between a fixed camera installation and a PTZ installation. Most manufacturers agree that PTZ is still a technology reserved for more sophisticated applications, and as Ron Go, product manager for PTZ at Honeywell Security, Syosset, N.Y., emphasizes, "PTZ does not fit every application." Casinos, corrections facilities and schools are some examples of typical PTZ applications.

Added features and continued improvements, however, give integrators more than what they were buying five years ago. Keith Kanestrin, marketing manager for security and vision systems at Panasonic, Secaucus, N.J., believes that the added features and options over the past few years have increased the value of a PTZ camera. "The price has been stable, while features have continued to rise. This means you are getting a lot more for your money," Kanestrin says.

Gareth McClean, director of research and development at American Dynamics, San Diego, Calif., agrees. "[Cost] is coming down gradually. Each year the features are becoming more sophisticated. New features are being added and that keeps the cost constant," McClean says.

According to Go, every customer is looking for something different in a PTZ camera. Some buyers focus on price, some on capabilities such as IP technology or wireless, some on zoom and field-of-view. ("Not everyone is asking for wireless," Go says, "but it does come up.")

According to Joe Olmstead, director of marketing communications at Pelco, Clovis, Calif., the integrator's choice for a specific PTZ camera is due to a variety of reasons, such as space, cost and weather conditions of the application.

More for Your Money

So, with many options available, what will you get for your money?

"It depends on what you want to spend," Olmstead says. "Options are limitless," he adds. Kanestrin points to intelligent technology, such as auto-image stabilizing and auto-tracking as highly sophisticated options for applications such as corrections facilities or casinos. Auto-tracking or motion-tracking is a feature that will follow a moving object, for example. Auto- or motion-tracking may be built into the actual camera or provided separately as a function of the video surveillance system, depending on the manufacturer, Kanestrin says. Motion-tracking technology has yet to be perfected, however, McClean says.

"A lot of people have experimented with that already over the last few years. There are a few difficulties with the practicalities of actually tracking the object, but it is likely to get better and better," McClean says. Currently, the technology tends to work under certain circumstances but not all, such as multiple moving objects, he adds. Motion-tracking is different from a common technology in PTZ cameras, usually called motion detection, which can cause an alarm to start recording or trigger an alarm when it detects motion.

To maintain a clear and right-side-up picture of an object passing underneath the camera, cameras may come equipped with auto-flip (also called auto-pivot or automatic 180-deg. turning, depending on the manufacturer). Many cameras also include a technology called privacy masking (the function name varies by manufacturer), which prevents users from viewing sensitive areas.

Day/night capability, manufacturers agree, is a must for 24-hour surveillance applications. In addition to day/night capability, customers are looking for further low-light capability and high-resolution images at night, Kanestrin says. One such technology that ensures a clear image in a range of lighting conditions is wide dynamic range. "Wide dynamic range can take two images exposed at different [light] levels and combine those together to improve the picture," McClean explains.

For applications such as power plants, corrections facilities or similar outdoor areas, ruggedized PTZ cameras are in demand. Such cameras withstand extreme weather conditions such as wind, rain and snow.

Another option that integrators are demanding is IP-based PTZ cameras. Currently, the typical PTZ camera for large installations is an analog-based system. At simplest, users can view the camera through an Internet Web browser. Some manufacturers offer digital video management systems, which allow the end-user to also control the camera's functions.

"IP cameras have already gained a lot of market acceptance in applications such as home surveillance and small-business surveillance. As they are evolving in control and viewing options and smarter network impact, they are gaining more acceptance with integrators. Higher-level business solutions will come next," says Gilbert DeLiso, national sales manager, CCTV products group, at Elmo USA Corp., Plainview, N.Y. Advancements in the IP-based PTZ cameras themselves, advancements on the back end as far as digital video management systems, and seamless integration with IT and the network, is the future of PTZ technology and video surveillance systems, he says. "The digital realm is the direction any serious player must be aware of and respond to," DeLiso adds.

McClean agrees, adding that advancements in IP-based PTZ cameras will start to take off in the next 12 months and even more rapidly thereafter. Buyers should look for an increase in features such as IP capabilities, motion-tracking and auto-image stabilization in the near future.

In this article, SDM highlights a selection of the industry's latest PTZ cameras and presents technologies upon which they are built. 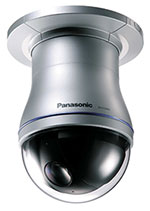 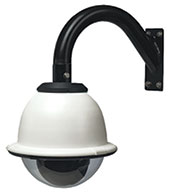 With its snap-in dome drive, Toshiba's Surveillix Dome CCTV cameras claim easy installation and simple integration with electrical connections, and in-ceiling or pendant mounts. The cameras offer 480-TV-line, high-resolution capture and auto-focus with manual override. Digital-recorder-ready with 50dB signal-to-noise, the cameras feature 18X optical and 12X digital zoom, as well as 360-deg. pan rotation. These dome cameras are fully programmable with RS-422 connectivity to link up to 255 cameras on one system. Indoor or outdoor options are available. 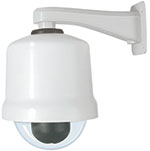 The KD6i series of dome cameras from Honeywell Video Systems performs in both standard indoor applications and extreme weather outdoor applications and, most recently, was used for surveillance in the 2005 World Series of Poker tournament. For extreme low-light performance, the optional color camera converts to black-and-white. The high-speed dome includes auto-pivot tracking, which allows the dome to turn 180 deg. when reaching its lower limit - in case an individual moves directly below the camera. One unique feature - auto-homing - activates a video guard tour, PTZ pattern, or a pre-shot position after a specified period of inactivity, and is programmable up to 99 min. A flashback feature recalls the last pre-shot position observed, and a freeze function freezes and unfreezes a video signal with a keyboard command.

The latest version of Bosch's AutoDome camera features a 26X optical zoom, 12X digital zoom and day/ night capabilities. An auto-track feature causes the camera to automatically lock onto a subject when motion is detected, zoom in for a better view and follow the subject anywhere within the camera's 360-deg. coverage area; when connected to a recording device, the recorder will provide uninterrupted video of the object in motion. Users can integrate the camera systems with select manufacturer's control systems, as well as with Bosch's standard options of Biphase, Bilinx, RS232 or RS485 communication.

A premium model of the Spectra III line of Pelco's dome systems is the Spectra III SE 23X. Available with a 23X optical zoom, the camera features an infrared cut filter removal for day/night operation. Pelco offers a number of different enclosures to ensure that the camera system is ideal for any application. The 23X day/night camera features an 80X wide dynamic range, which responds to bright and dark areas and makes adjustments to provide the best possible image available. Programmable motion detection technology can create an alarm signal to trigger a recorder. For on-site programming, set up and pan-tilt-zoom control, the camera uses a RJ45 data port.

The Legend dome camera incorporates GE Security's SilkTrak direct-drive technology with closed-loop position feedback, which eliminates gears and belts that cause jerky motions, for smooth, precise performance. Users can program resets to within Â±0.015-deg. Features include 1.0 lux color sensitivity for 24-hour surveillance applications, and a 26X optical and 12X digital zoom. A plug-in video encoder/decoder facilitates field upgrades of Legend cameras to full IP-based systems. The camera's electronic image flip eliminates the need to rotate the camera 180 deg. to track an object beneath the camera. The manufacturer claims that installation can be accomplished with one hand. 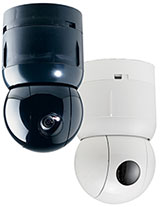 With enhanced day/night capabilities, the SpeedDome Ultra VII uses a 23X optical zoom, 10X digital zoom, and digital signal processing (DSP 6), which provides enhanced clarity and color in low-light conditions. Motion detection monitors areas of interest, and when triggered, will initiate an alarm, initiate a pattern, or monitor an area as long as motion is present. An optional feature freezes a moving image to a preset, reducing hard drive space when the video is digitally recorded. The zoom adjusted program automatically adjusts pan and tilt speeds in proportion to zoom position, and a home position feature allows the dome to return to the home position after being inactive for a specified period of time.

Users of the Axis 213 PTZ network camera can remotely monitor video with pan-tilt-zoom control over an IP network. With a built-in Web server, the Axis 213 network camera - an alternative to the traditional PTZ camera - provides 20 pre-set positions, and features a 26X optical zoom and an IR mode for night conditions. An optional connection module allows for additional functions such as two-way audio.

Unlike a traditional analog PTZ camera, the CommandView digital dome is a network camera that allows users to digitally pan-tilt-zoom 360-deg. video with no moving parts. Monitoring is done over a LAN/WAN connection. Features include built-in motion detection, alarm notification and the ability to interface with external alarm devices. Field-of-view is 360 by 180 deg. For vandal-resistance, the enclosure has the strength of 10-gauge steel and can withstand 120 lb. of force. 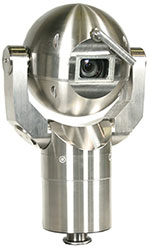 Moondance is Extreme CCTV's ruggedized PTZ camera that has been installed in all types of outdoor locations from busy urban streets to coastlines. The rugged dome is made of compact stainless-steel or aluminum and is waterproof and corrosion-resistant. The camera offers 18X optical zoom and 12X digital zoom. An optional 45-deg. yoke configuration allows the camera to look vertically downwards from a pole top. A mechanical IR-cut filter provides optimum performance in low-light conditions. 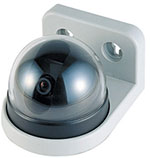 KT&C's Speed Dome KPT-SPD301FHE PTZ camera offers a 27X optical zoom and 480-TV-line resolution. The camera pans 360 deg. at 0.1 to 120-deg. per sec., and tilts 120 deg. at 0.1 to 120 deg. per sec. In addition, the speed dome offers 360-deg. continuous pan rotation. This model is weatherproof and offers mechanical day/night capabilities. The camera is equipped with 128 pre-set positions. 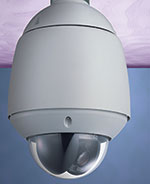