Andy Johannsen, president, and Kelly Johannsen, vice president, of Total Security Concepts.
In its third year, the First Line of Defense Award, co-sponsored by SDM and the National Burglar and Fire Alarm Association (NBFAA) continues its mission to recognize and publicize the effectiveness of electronic security and life safety systems. The award honors the dealers, central stations and emergency authorities that have demonstrated outstanding performance in deterring, detecting or preventing crime and/or loss through the effective design, use and response to security and fire alarm systems.

Business owners large and small know a good security system goes a long way. The upfront investment may seem costly, but in the long run, it may actually be a money saver. This proved to be true for one business owner. On Friday, April 7, 2000, around 12:30 a.m., a team of burglars attempted to rob Paul Coffinâ€™s Check Cashing Center, in Salisbury, Md. They were unsuccessful thanks to a top-notch security system installed by Andy Johannsen, Total Security Concepts, Abington, Pa. That system not only secured the check-cashing store, it secured the third annual SDM/NBFAA First Line of Defense Award for Total Security Concepts.

In early April of 2000, the Salisbury area experienced a crime wave. A number of stores at a local strip mall were hit, and there was no end in sight.

Paul Coffin, the sole proprietor of a check-cashing center in Salisbury, was located next door to one of the stores that had been robbed. He immediately wondered if his store would perhaps be the next target.

â€œI figured that the thieves may have missed their intended target,â€ says Coffin. â€œWhy would anyone risk getting caught for nothing more than what can be found in a Rent-Rite store, when there is a check cashing center located right next door?â€

Paulâ€™s hunch proved to be true. In the early morning hours of April 7, 2000, the thieves returned. However, thanks to a little forward thinking when the store was being built, the thieves did not stand a chance.

â€œWe started working in partnership with the contractor that was building the store, and we installed a comprehensive security system that includes burglar and fire alarms, access control, and CCTV,â€ said Johannsen. â€œThe security package also included bulletproof walls, glass and doors, which provided the customer with a level of protection uncommon in check cashing centers.â€

â€œThe use of cellular radio as a back up to public access telephone alarm communication is growing,â€ said Patrick Devereaux, vice president, EMERgency 24. â€œThe cost of equipment is going down in response to increased demand. In addition, the reliability and efficiency of both the radios and the cellular networks contribute to the growing adoption of this technology. EMERgency 24 monitors Uplinkâ€™s cellular network signals, which was the case in the incident that occurred on April 7, 2000.â€

The thieves, armed with two-way radios, ropes, and gas-powered saws, began their attempted robbery by cutting the phone lines to the strip mall where Coffinâ€™s store is located. This triggered Uplinkâ€™s cellular network signal to take over communication. 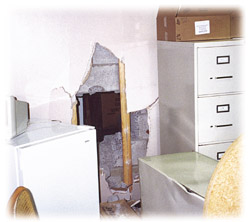 Two thieves broke through the wall of Paul Coffin’s check cashing center in an attempt to rob the store.
Next, they cut a hole into the roof of a vacant, adjacent store, and lowered themselves down. Feeling pretty confident, they proceeded to hammer a hole through a cinder block wall that led into a space behind the check-cashing center. They then hammered another hole into another cinder block wall to enter the store.

Over two hours later, they broke through that second wall, knocked over a large file cabinet and crawled inside. At that point (around 2:30 a.m.) they unknowingly tripped the back room dual-technology motion detector and subsequently the Uplink digital cellular backup device that leads directly to the check cashing center. This took over communication, since the phone lines were out, and routed the signal to EMERgency 24.

The motion detector also set off a siren. The two thieves smashed the siren and the keypad to stop the noise, which automatically locked the front door. Once inside and unaware of the situation they had created for themselves they located a large safe and dragged it to the rear of the store to cut it open with a large, diamond blade saw. Little did they know it was a decoy, intentionally left in view of customers, while all cash was kept in a safe hidden out of sight.

They also neglected to access the time-lapse VCR that was recording their activity from four CCTV cameras. Satisfied with their situation, the thieves moved ahead with their plan and proceeded to try and open the safe. They were about to get exactly what they wanted...or so they thought. 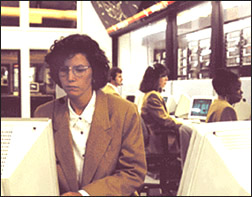 Emergency24 operators are on duty around the clock.

Back at Emergency24, the operator on duty attempted to verify the alarm, received no answer, and then immediately dispatched the police. â€œThe alarm user, in consultation with the alarm company, customizes the dispatch procedure for each type of alarm condition. Burglary signals are normally verified by a call to the premises prior to dispatching authorities; allowing an authorized individual to cancel a false alarm,â€ said Devereaux.

Police quickly arrived on the scene (about five minutes after being dispatched), surprising the robbers.

When the first officer arrived on the scene, the robbers fled from a back door. A second officer spotted them running and notified police in the area. After a short pursuit, the Salisbury police caught and arrested the suspects in a perimeter trap. Based on physical evidence found at the check-cashing center (tools, footprints) police were able to charge them not only for the attempted check-cashing robbery, but also for the robberies at the other strip mall stores. At present, one was convicted and the other was awaiting trial.

Johannsen is pleased that his system came through when it was needed. â€œWhen I got the call from Paul around 4:00 a.m., all he said was â€˜they came back and we got them. The system worked, buddy!â€™,â€ said Johannsen. â€œThat was all the thanks I needed.â€ EMERgency 24 applauds Total Security Conceptsâ€™ commitment as well.

â€œTotal Security Concepts is a long-standing EMERgency 24 dealer. We applaud their excellent work in specifying and installing systems, like the one installed at Paulâ€™s check cashing center,â€ said Devereaux.

And even though the security system played a large role, it really was a team effort. â€œI am always telling clients about Emergency24 and the importance of a cellular backup. Both played a critical role in this success story, along with the rapid response and quick thinking of the Salisbury Police Department,â€ said Johannsen. â€œThe First Line of Defense Award is an honor that will inspire us to work even harder. It was definitely a team-effort, and weâ€™re proud to have been a part of it.â€

The company has experienced steady growth over the past four years and plans to hire additional staff and expand office space within the next year.

TSCâ€™s customers appreciate personal service from a local company. The companyâ€™s main goals are to provide the best product at a reasonable cost and earn customersâ€™ business year after year.

Andrew Johannsen, President of TSC, has been in the alarm industry for eight years. Before starting TSC, he worked in home remodeling, electronics manufacturing and for other alarm companies in installation and service.

Kelly Johannsen, TSC's Vice President, heads the sales department and has a background in retail management, banking and IT project management. Visit Total Security Concepts at www.totalsc.com, or send e-mail to andy@totalsc.com.

Sidebar:
AROUND THE CLOCK: EMERgency 24

EMERgency 24 monitors alarm systems exclusively for independent alarm installation companies throughout the United States. Over 1200 dealers entrust the security of 130, 000 premises to a trained and tested monitoring and technical staff. Founded in 1972, the company operates central stations in the Chicago, Detroit, Washington D.C. and Los Angeles areas. Also since 1972, EMERgency 24 alarm monitors have been instrumental in thousands of criminal apprehensions and tens of thousands of â€œsaves.â€ â€œEMERgency 24 is proud to have played a role in the events that led to Total Security Concepts receiving the First Line of Defense Award,â€ said Patrick Devereaux, vice president, EMERgency 24. â€œWe applaud the recognition of dealer excellence that results in the reduction of subscriber losses and increased subscriber safety and peace of mind.â€ Devereaux also notes that the thrill of helping to catch the criminals never goes away. â€œThe thrill of catching the culprit or saving lives and property never dulls,â€ says Devereaux. â€œEach event results in the same glow of a job well done.â€